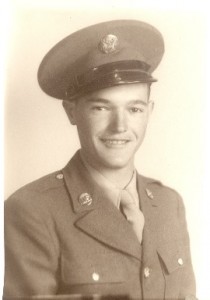 Grant H. Cooper, aged 91, passed away peacefully at his home November 21, 2014.  Grant was born November 6, 1923, to Nathaniel and Isabelle (Grandma Bell) Cooper in Panguitch, Utah.  Grant was one of eight siblings, who were some of his best friends and partners in crime.  Grant married Ruth Lydia Walton on July 20, 1946.

Grant was a man of hard work and tough stock.  He left his formal schooling in the eighth grade to work and help support his family.  He was a member of the CCC, Civilian Conservation Corps, where his hard work and support of his family at home continued.  He then went on to serve honorably in two branches of the military, the U.S. Army and the U.S. Air Force.  Grant served as a Forward Scout in World War II and with his fellow servicemen, helped gather important information to keep other soldiers safe.  Upon his return from service, Grant worked for many years at Hill Air Force Base as a civilian employee.  While employed, he attended Weber College on the GI Bill.  After retiring from Hill Field, Grant moved to Idaho to spend time with family but returned to the workforce as an agronomist at U.S. Steel.  Grant eventually retired and made his home in St. George, Utah.

Above all else, Grant was a horseman.  He loved the outdoors and working with his horses.  He was gifted with animals and had many horses and an old Blue Heeler pup that he considered family.  He spent his summers in the “the hills” herding cattle and spent countless hours training cow-cutting horses.  Grant also spent years as a calf roper and was a member of the RMRA rodeo circuit.  He was a larger than life character and in his retirement drove around on a little tractor cleaning up construction sites and bringing his humor everywhere he went.