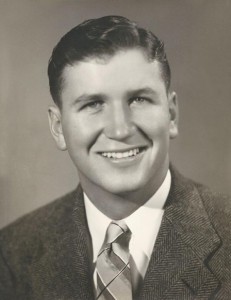 St. George, Utah. Gerald Leavitt Holt, 89, passed away peacefully on November 18, 2014, surrounded by much of his family. Gerald was born February 4, 1925, in Gunlock, Utah, to Wilford Martin Holt and Blanche Leavitt Holt. He married Misha Bentley Holt on May 14, 1947, in the St. George LDS Temple.

He loved growing up and going to school in Gunlock. He learned to work on the farm with his father and brothers, and made friendships that lasted a lifetime. He attended Woodward High and graduated from Dixie High School. He also attended Dixie College for a time.

Gerald served in World War II for 28 months and after a six week training at Camp Farragut in Idaho he was assigned to the USS Sicord; a destroyer mine layer in the South Pacific. Because of his clerical and typing skills, he rose to the rank of Chief Petty Officer. Upon returning home he married Misha and they settled in St. George.

Gerald loved life and always showed great love for all his family. He was especially kind and attentive to his parents. He spent countless hours with his grandchildren and great grandchildren and had a way of making each one feel like they were his favorite. He leaves them with thousands of happy memories.

He is survived by his wife Misha, of St. George; children Jeff (Susie) Holt of St. George, Gordon (Shanna) Holt, of Hurricane, Tim (Kathy) Holt of Phoenix, Arizona, and a daughter-in law Laurene (Norris) Brown of St. George, sixteen grandchildren, and 19 great grandchildren and many nieces and nephews. He was preceded in death by his parents, his mother-in-law Ellen Seegmiller Bentley, his brothers Milton, Andrew, Merlyn, Ken, his sister Berniece McGregor, his son Bruce Anton Holt, and grandson Clint Adams.

Gerald’s family would like to express their deepest thanks to Dr. Claude Warner and his wonderful staff for the great care and compassion they have shown to him over the past twenty years.