FEATURE – It’s been nearly a year since Groovefest Music and Art Festival co-founder Tim Cretsinger was diagnosed with HPV throat cancer, and the memory of that moment is as fresh in his mind as the moment it happened.

“I don’t know if most people have a clue what that kind of news does to you,” he said shuddering. “It still gives me the creeps to think about – just hearing that from the doctor was, like the worst feeling in the world.”

Cretsinger said he had started to notice a lump in the back of his throat sometime in Oct. 2013. Using the internet to self-diagnose, he said he was convinced that the lump was nothing more than an unusual abscess called a quinsy that needed to be lanced and drained.

“I diagnosed myself and that was stupid,” he said.

He said he hadn’t really been in a doctor’s office in 25 years, but by December the irritation had become so painful he decided it was time to go in. Sitting on the edge of the table, bracing himself for the pain of a scalpel, Cretsinger said he opened his mouth wide to show the ear, nose and throat specialist where to cut.

One quick look at the lump in the back of his throat was all the doctor needed to deliver the unexpected blow, Cretsinger said. The irritating lump was no quinsy abscess, he said – it was a hard tumor – cancer, caused by the human papillomavirus.

Shocked and disoriented, Cretsinger said, he and his wife had a difficult time digesting the news at first. As it slowly sunk in, he said the realization struck him that somehow, he would never be the same.

The only comfort he found throughout the duration of his treatments came from incredible support he received from his wife and friends, Cretsinger said, the friendliness of the dedicated staff at the Huntsman-Intermountain Cancer Center, and the technology available in the tiny town of Cedar City.

“I am pretty lucky in a lot of ways,” he said. “A lot just fell right in together at the perfect time.”

Cretsinger said that he and his wife were looking into switching health care coverage just as his diagnosis came in which could have meant a death sentence, but thanks to the timing of the Affordable Care Act, insurance companies were not allowed to turn him away based on a preexisting condition.

It was a bit surreal, he said, the first time he walked into the cold, sterile room where he would receive radiation over two months time, and the strangeness of it all left him feeling a little unsettled.

Cretsinger said he was fitted for a plastic, mesh mask that would keep him still so the radiation could focus on the exact same place every time – another strange accoutrement to add to the laundry-list of weirdness.

The enormity of the room that housed the radiation machine that would zap Cretsinger’s lymph nodes and hopefully kill the cancer did little to curb the claustrophobic panic and occasional loneliness that crept in during treatments. He came to terms with it quickly however, because, “well, what’s the alternative?” he said.

Eventually, the 20 minutes he was strapped to the table, unable to move, became a time of meditation for him. Sometimes, he said, it felt like he was on a spaceship in a sci-fi flick preparing to shuttle off to worlds unknown.

Though he jokes about it now, Cretsinger said there was nothing funny about going through cancer treatment. He said there were times when he had reached incredibly low points, and though he never tried himself, he could understand why some people contemplated or attempted suicide in the face of cancer treatment.

“I just can’t imagine what’s it’s like for those people who have to go through this alone,” he said, drawing a deep sigh and staring off into the distance.

Cretsinger said his treatments ended on March 31. Since then, his strength has returned considerably – along with a bit of his facial hair – and he was able to do more with each passing day.

Even though his treatments ended more than seven months ago, Cretsinger still feels weaker than normal for himself, he said, and he has yet to regain the ability to produce saliva or taste food – though he said he hoped that isn’t too far behind.

“Both my chemotherapist and my oncologist told me that I would feel as bad, if not worse, a couple of months after treatments,” he said.  “Because my body would still be catching up to what’s been done to it.”

Of everything he went through, the chemotherapy was the worst part. He was supposed to have three doses, and was grateful when his doctor called off the third, Cretsinger said.

“They did two 8-hour chemo treatments,” he said. “When the doctor said, ‘I think we can skip the third one,’ I was so relieved, because I was already thinking I couldn’t take another one of those.”

In a week-and-a-half, Cretsinger will go and have a PET scan to evaluate his cancer-free status, but so far everything has been looking good, he said.

In the year since his diagnosis, Cretsinger has become a staunch advocate for HPV throat cancer awareness. However, just raising awareness isn’t enough, he said, it must be paired with a call to action.

He believes that with education should come a call to action. Inoculating adolescents against the HPV virus can save lives he said, and it has become a new life mission to help spread the word.

“I have had several people come up to me and say ‘I am getting my kids inoculated for this because I don’t want to see them go through what you went through,’” he said. “Maybe I can be like a poster child for helping to save lives in that way.” 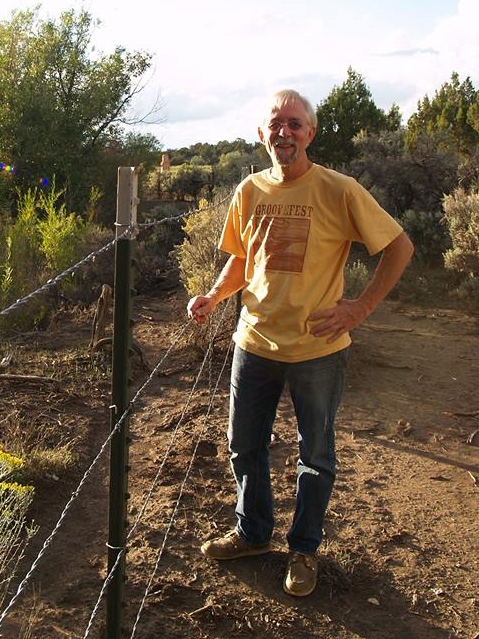 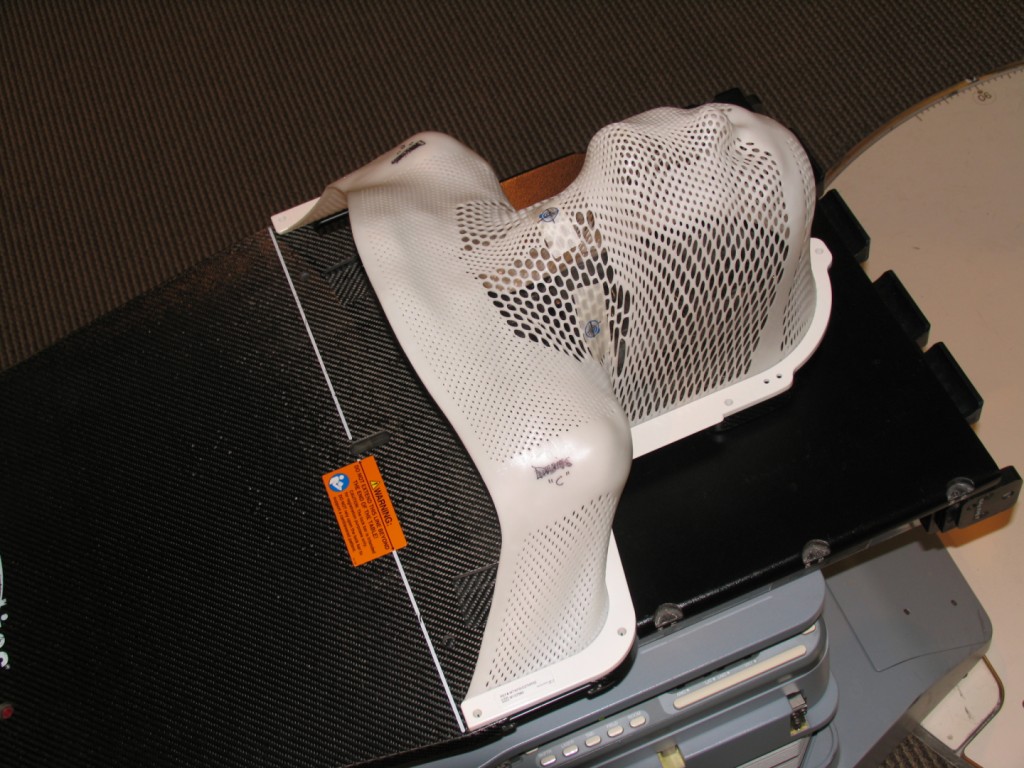 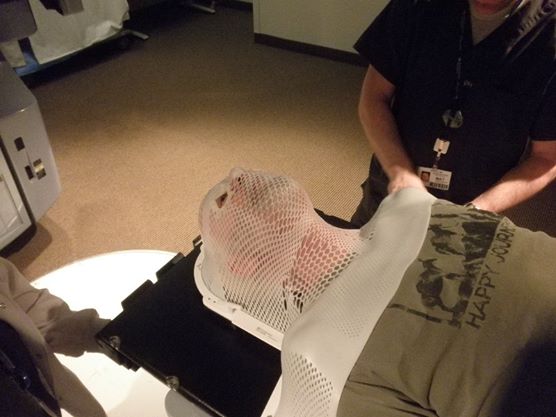 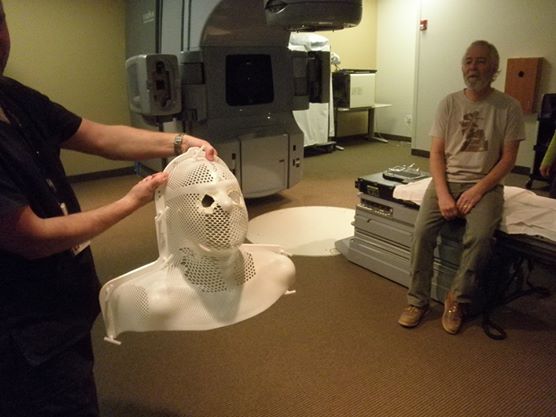 Tim Cretsinger said they asked him if he wanted the eyes cut out of his mask, and he said yes. He said he wasn't sure what the people did during treatment who said no, because they couldn't even look at the art on the ceiling. Cedar City, Utah, date not specified | Photo by Lisa Cretsinger, courtesy of Tim and Lisa Cretsinger, St. George News 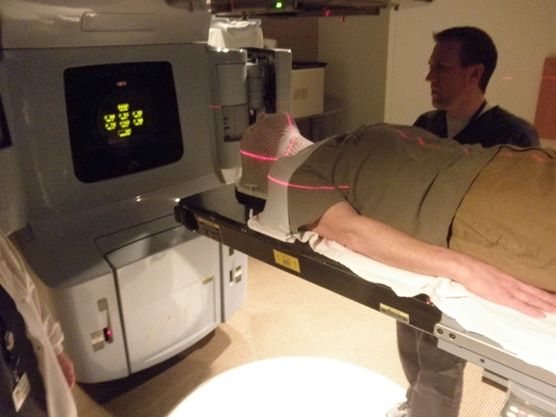 Cedar City, Panguitch hospitals named among the top rural facilities in the nation