The two teams played a smash mouth affair just a few weeks ago, with a motivated D-Hills team taking a 21-3 decision. But the Thunder, who clinched the region’s top seed that night, found the Tigers to be a worthy opponent. Hurricane led 3-0 at the half and a late turnover was key in helping DH put the game away.

“We forced them into some tough down and distances,” DH coach Carl Franke said that night. “We knew we would wear them down. We played pretty physical and dominated the line of scrimmage.”

Most of Desert Hills’ 260 yards of offense in that game came after halftime. Star running back Bridger Cowdin was held to 72 yards on 19 carries, an average of just 3.4 per attempt, well below his 8.5 yards per carry most of the season.

D-Hills had just eight offensive possessions in the game. The first four, all in the first half, ended in futility. But the Thunder scored on their first three possessions of the second half to get the win.

Hurricane, meanwhile, had just 141 yards in that game and most of those came off the arm of senior quarterback Kaden Langston, who was 8 of 13 for 112 yards. The Tigers had virtually no running game with just 27 yards on 39 carries.

That will have to change this time around if the Tigers want to pull the upset, especially with Langston out with a broken ankle. Sophomore quarterback Josh Parker will need to be a viable threat if the Tigers are to get fullbacks Jeremiah Ieremia and Jake Carr any running room.

The Thunder will likely have to pass the ball with QB Nick Warmsley and receiver Mason Palmer against the stout Hurricane defensive front.

Tonight’s winner will play Dixie next week in the 3AA Championship at Rice-Eccles Stadium with kickoff set for 11 a.m. 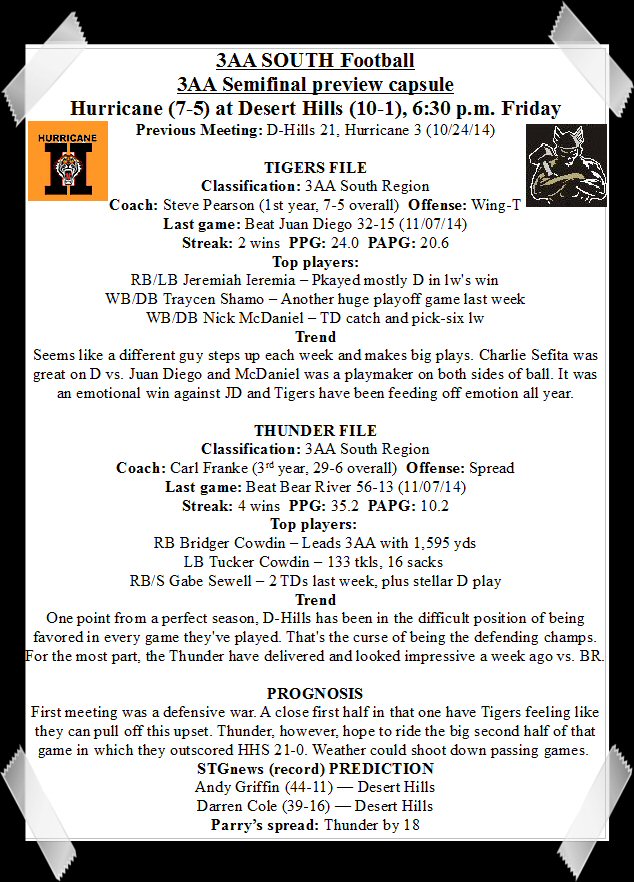 Region 9 basketball recap: Thunder are the queens of the Desert Hills Holiday Classic

He has no vision in his left eye, but his St. George Christmas lights are the brightest on the block