ST. GEORGE —  With sponsorship from PetSmart Charities and Best Friends Animal Society, P.A.W.S. is spearheading the Southern Utah Mega Pet Adoption event Friday from noon to 6 p.m. and Saturday from 10 a.m to 4 p.m. at  the PetSmart store in St. George, located at 15 S. River Road. 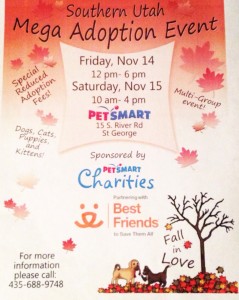 “We’ve had over 100 adoptions in previous years and events, so we hope to get at least that much if not more this time,” Burger said.

This is the first event P.A.W.S. has hosted in conjunction with PetSmart Charities, she said, but P.A.W.S. has partnered with Best Friends Animal Society on various adoption events for about 13 years.

PetSmart Charities just supported its 6 millionth adoption since it began in 1994, Pawloski said.

“It’s events like this one that make that mind-blowing number of adoptions possible,” he said.

Patrick Boyle, a PetSmart store manager, said this year’s event will feature cheaper adoption fees, ranging from $35-$125 depending on the pet being adopted.

At last year’s Super Adoption Event, the store’s front portion was filled completely with dogs, cats and rabbits, and this year should be no different, Boyle said.

“Last year there were tons of dogs,” he said. “I know there will be a lot this year, as well.”

In addition to saving an animal through adoption, pet owners reap benefits, as well. Having a pet helps lower blood pressure, Burger said, and by adopting a dog, owners can keep physically active as they take it on walks.

“This event is also a good chance for people to learn about the pet adoption process and to find a good, furry family member,” she said.

Best Friends has worked with P.A.W.S. frequently on other adoption events, she said. In previous years, groups from northern Utah have come to Southern Utah to participate, but this year’s event is geared toward local animal rescue groups.

“It’s vital to have rescue groups to help the orphan and homeless animals,” Williamson said. “All these pets are from shelters and are in need of a home. It’s nice to (host) the effort together with these groups and play such an important role in the animals’ lives.”

Bunny business: The dos and don'ts of owning a rabbit