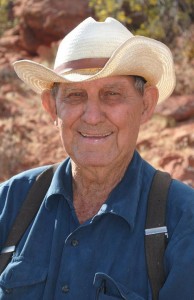 Our father, Jimmy Edward Jergins, passed away the evening of October 21, 2014, at his daughter’s home. Jimmy was born March 24, 1927, in a log cabin, in Oak Creek, Yavapai, Arizona, to William Edward Jergins and Magdalena Jane Winona Jergins. Jimmy was the third child and the second son. He was the last survivor from this family.

After the death of his parents Jimmy was raised by his maternal Grandma Winona and her daughter, his Aunt Sarah. Jimmy came to Saint George, as a young man, from Cottonwood, Arizona. Aunt Sarah’s second husband, Ura Jordan, had accepted work on the Arizona Strip as a cowboy for a cattle rancher there.

Jimmy was also working as a cowboy when he was drafted into the Army. He left St. George and traveled by bus to Fort Douglas, in Salt Lake City, Utah, where he was with several individuals also from Saint George. They trained there for a while and from there were sent to Fort Hood, Texas. Finally, Jimmy was sent to Germany where he was assigned to guard a warehouse compound.

After World War II was over, in 1945, Jimmy returned home to Saint George, Utah, where he met the love of his life, Mary May Laub. They were married on July 7, 1947, at the home of Clarence and Lavivian Laub.

Except for a short period of time in Oak Creek, Arizona, Jimmy and Mary made their home in Saint George, raising their children in the home they built on 7th South Main Street. On retirement, they traded this property for their home in Middleton. This neighborhood was filled with good friends and neighbors that helped to make their retiring years golden.

They were married in the Saint George temple for all time and eternity on Feb. 5, 2005. Their association with the ward, and Dad’s calling as a greeter in Sacrament Meeting were highlights of these times.

Mary passed in May 2010, a month short of 62 years of marriage.  Knowing that they are together again brings us a sense of peace that eases our sorrow. We are forever grateful to the people of Hospice that attended him this past year, their professional skill and warm hearts will not be forgotten.

At the time of his passing, Jimmy and Mary had five children, 18 grandchildren (one deceased, Michael Smith) and numerous great grandchildren.