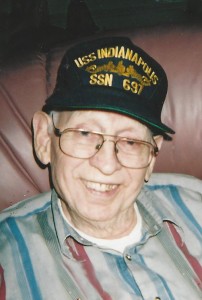 Bill spent most of his childhood living in Oklahoma.  After the 8th grade he quit school to help his mom raise his siblings and to help maintain the family farm.  During his teen years, he would catch rattlesnakes and sell the heads to the Indians for 25 cents each.  At age 19, he enlisted in the U.S. Army where he served for several years and was soon wounded.  He was discharged to allow him time to recover.  Soon after, he followed his brother and enlisted in the U.S. Navy.  During this time he served on the U.S.S. Indianapolis as an Electrician’s Mate, 3rd Class.  He was stationed on this ship when it was torpedoed during World War II. He survived 5 days afloat in the Pacific Ocean before being rescued.  After his rescue and discharge from the Navy, he worked as a union rep for the CWA for over 30 years and also taught himself much about the law.

Upon retirement he moved to Hines, Oregon, where he owned his farm for many years.  This is where he was able to return to his childhood love of farming. During their golden years of retirement he and Wilda also loved to travel the states in their motor home, visit historical sites, fish, attend family reunions and spend as much time as possible around their many grandchildren and great grandchildren.

We would like to recognize the outstanding service given to Bill by the many employees of Sterling Court during the 3 years he lived there.  We would also like to show appreciation for the loving care given to Bill by Dixie Home Rehab & Hospice and Kolob Care & Rehabilitation of St. George.