COMMENTARY — The nation is starting to take notice of the 2014 BYU Cougars.

BYU moved up again in the national polls this week after beating Houston 33-25. Now all of the national polls are taking a little more notice in what Coach Bronco Mendenhall’s program is doing in 2014. USA Today has BYU at No. 23, the AP poll has the Cougars at No. 21 and ESPN’s power ranking put the Cougars No. 17.

That is a nice little bump, but BYU has a long way to the top 10 and will need some outside help to move up much more. BYU will need to first continue to win each week, but also they will need other ranked teams to continue to fall. That’s what happened last week when Virginia beat previously ranked No. 21 Louisville. Nationally ranked (17) Virginia Tech fell to East Carolina. Unranked Boston College also beat No. 9 USC. This as well was several other big upsets tell me a couple things. There is not as much talent that separates college football programs these days and any team can beat any other team on any Saturday. 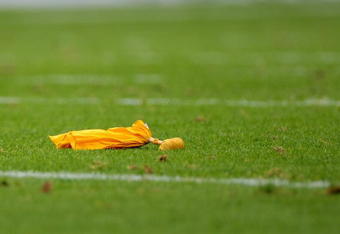 Last week’s game vs. Houston was a battle, but truthfully showed that BYU has a lot of hard work ahead, and I am not just talking about the schedule. First, the Cougars have to stop killing drives with all of the penalties they have been committing each week. They have had touchdowns taken away and given up touchdowns from committing penalty after penalty. They can’t compete and win out their current schedule with how reckless they are playing on both sides of the ball. I love how hard they are competing, but they are not learning from their mistakes from week to week.

I will guarantee that they will lose a close game this season if they cannot get control of the great numbers of flags thrown on them. BYU’s effort is excellent, but the most basic fundamentals are being overlooked week in and week out. Just simple things, like illegal man down field, ball handling, false starts, throwing punches, not running out of bounds when time is running out at the half when you are in field goal position. Turnovers and poor decisions were the main reason BYU kept Houston in the game last week.

Second, is more of a question out of concern for the team’s health and season-long longevity. Is Taysom Hill a QB or running back and is the play calling enabling him to take too many risks? I think he’s a running back in most situations because in post-game interviews he looked black and blue from head to toe. He is being hit and he is taking a beating and this will all add up on his body at some point. Even though he is a triple-threat QB, Hill needs to be cut out of some of the running game by the play calling to keep him healthy for the longevity of this season. Taysom is as tough as nails and I have been saying that for three years since his first few snaps at BYU. But look at almost all triple-threat QB’s in college and NFL football. Robert Griffin III is one prime example. He just dislocated his ankle on Sunday and this is just one of his major injuries suffered in his career. If BYU wants Hill to compete to the best of his ability and make it through the entire season healthy, the Cougars need to start using their running backs. Jamaal Williams is back to preforming at high levels. Last Saturday Williams rushed for 139 yards and two touchdowns vs. Houston. He has the ability — use him more in the ground game.

BYU’S defense played very well, especially while missing cornerstone linebacker and QB-rushing threat Brandon Kaufusi. The Cougars will need Bronson back in the line-up this week to add some additional pressure on the opposing QB’s. Last week, Craig Bills and Alani Fua both had great games contributing with seven tackles apiece.

The Cougars offense will have less pressure if the defense can continue to play at the level they have been in the past three weeks. The Cougars will face a better team this week when Virginia comes to Provo. This game is one BYU fans will have redemption on their minds from last year’s close loss in their season-opener in Virginia, 19-16. I know this was a very sore subject for the entire BYU program because this was a team that BYU should have beaten and it slipped away. This year both teams are better, so it will be a very competitive game between these two programs.

Virginia is 2-1 with one close loss to then-No. 7-ranked UCLA in their season-opener. This team is much improved and I believe they are also better than most people are giving them credit for. After narrowly losing to UCLA, the Cavaliers have gone on to beat Richmond 45-13, and knock off No. 21 Louisville 23-21.

The Cavs will come intro the game very confident — hey they believe they can come into Provo and beat BYU. This could be a make it or break it kind of game for the Cavaliers as they have some of college football’s big boys coming up on their schedule, including Florida State, Virginia Tech, and Georgia Tech.

The head coach of the Cavaliers, Mike London, said he is impressed with where his team is heading with leadership and wins. This will be Virginia’s first time back to Provo since 1999, where the Cavilers beat BYU 45-40. Virginia currently owns the 3-1 edge in the all-time series between the these two programs.

One thing I know: BYU is going to need to put up some big points to win this game. Virginia has averaged scoring 29.3 points per game so far in 2014 and has some supreme athletes on that side of the ball. BYU only scored 16 points last season on the Cavaliers. It’s going to take more than that to win Saturday.

The Cavaliers have some really talented defenders as well. Middle linebacker Henry Coley has totaled 29 total tackles and 3.5 sacks to date and will be someone BYU will have to account for on each snap. At outside linebacker, Max Valles will pressure the QB with the help of standout defensive end Eli Harold, who has 3.5 sacks this season as well.

BYU will have to play with a controlled aggression. Hill must be aware of his surroundings and of Virginia’s fast defensive front seven. Taysom will need to rely on his running backs to pound the middle and then take opportunities when they are presented to him. The Cougars O-line needs to stop hurting offensive production with bad penalties, but still play with a mean streak. If BYU can run the ball soundly, that will open up some deep passes to the really deep BYU receiving corps. BYU must establish the run game — then the passing game will fall into place.

On defense, the Cougars need to try and shut down running back Kevin Parks, who is taking most of the hand offs so far this season. Parks is averaging about 60 yards per game on the ground. At QB we will see Greyson Lambert taking the majority of the snaps. Virginia’s really deep receiving corps is made up of many solid players including Taquan Mizell, Canaan Severin and Darius Jennings. We will see many talented receivers rotating in their offense, so BYU will have to be prepared for fresh, fast legs. BYU’s defense will need to play the full four quarters to beat this year’s Cavaliers football team.

Even though BYU is a 14 point favorite (according to Vegas oddsmakers) I see this game being a little closer than that. It should be one of the bigger games of the week in college football. Both teams have to much to lose on each side, and can gain a lot with a win.

~ Blue Blood is a weekly column written by former BYU captain Scott Young. The opinions expressed are not necessarily those of St. George News.