With temperatures at a comfortable temperature in the mid-80s, people were lining the street, ready to celebrate with floats, bands, motorcycle stunts and dance routines an hour before the parade started.

This year’s Dixie Roundup theme was “Roundin’ em up for 80 years.” The annual parade was a community event as marching bands, dance teams, riders and their horses, kids on bicycles and motorbikes pranced, danced and marched by the cheering crowd.

“I was impressed with how good the school bands were, and how many young people live here in St. George,” Shafer said. “It’s not so much a retirement community anymore.”

St. George Mayor Jon Pike and members of the City Council rode the parade route in a vintage St. George City fire truck and, like many others, tossed handfuls of candy to waiting children. Several candidates running in the November midterm election were also on hand to encourage support.

One of the most memorable parade entries was a team of zombies from Staheli Family Farm’s “Field of Screams,” a now traditional event held in the neighboring city of Washington during October. Children who were excitedly collecting candy suddenly looked for safety behind their parents as the zombies walked along the parade route putting on their scariest performance possible.

Patriotism was the theme of the night

From the parade, many people walked the short distance from Tabernacle Street to the Dixie Sunbowl to enjoy the closing night of the rodeo. The crowd of an estimated 7,000 people enjoyed prerodeo entertainment by country and western band “Most Wanted.”

To start the festivities Brad Jessey, owner of Skydive Mesquite, parachuted into the arena displaying the American flag. This was the beginning of a very patriotic evening.

Members of the Utah National Guard 222nd Field Artillery displayed power and might to the song “We Will Rock You” with the message reminding all in attendance that, even though we live in perilous times, America is strong thanks to our military personnel.

Rodeo announcer Reed Flake said to the audience that we put God first and country second, as he opened with a prayer for the country, its military and safety for the night’s cowboys and cowgirls performing in the program.

After the prayer Lainee McDonald, 13, of St. George sang the national anthem as a large flag was unfurled in the arena by approximately 30 children.

Several local celebrities were on hand to help with open ceremonies. Royal courts from cities all around Washington County helped to introduce and thank the rodeo’s sponsors. Marshall Simmons was introduced as the first annual youth ambassador for 2014.

Once the opening ceremonies were completed everyone settled in for a night of entertainment with calf roping, mutton busting, barrel racing and bull riding before Dixie Roundup 2014 ended in a round of applause.

The St. George Lions Club will begin planning Dixie Roundup 2015 as early as next week. 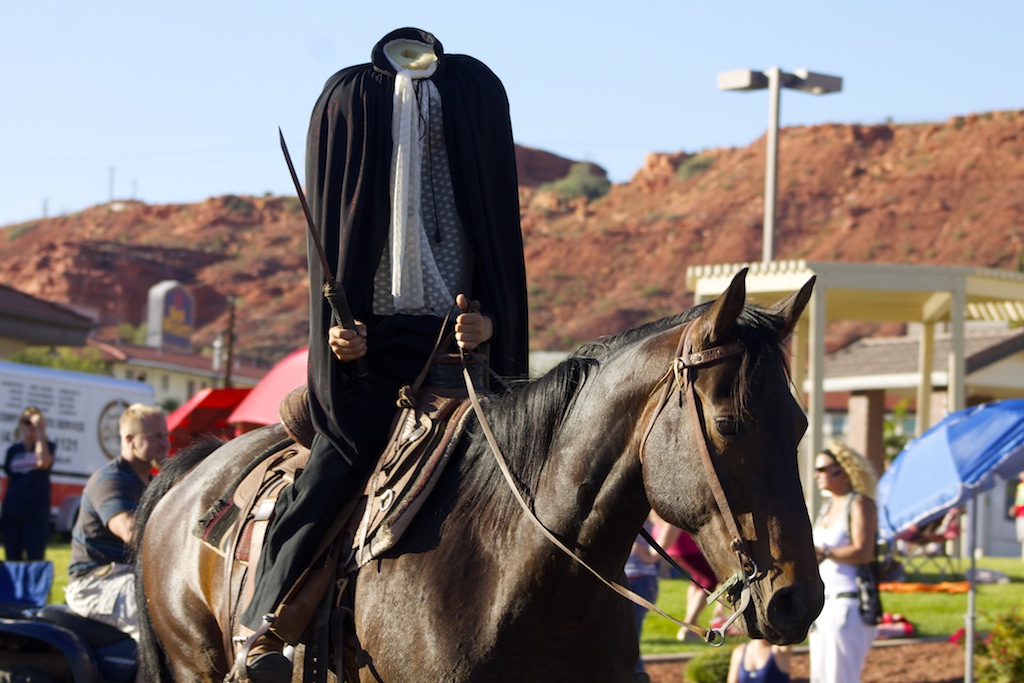 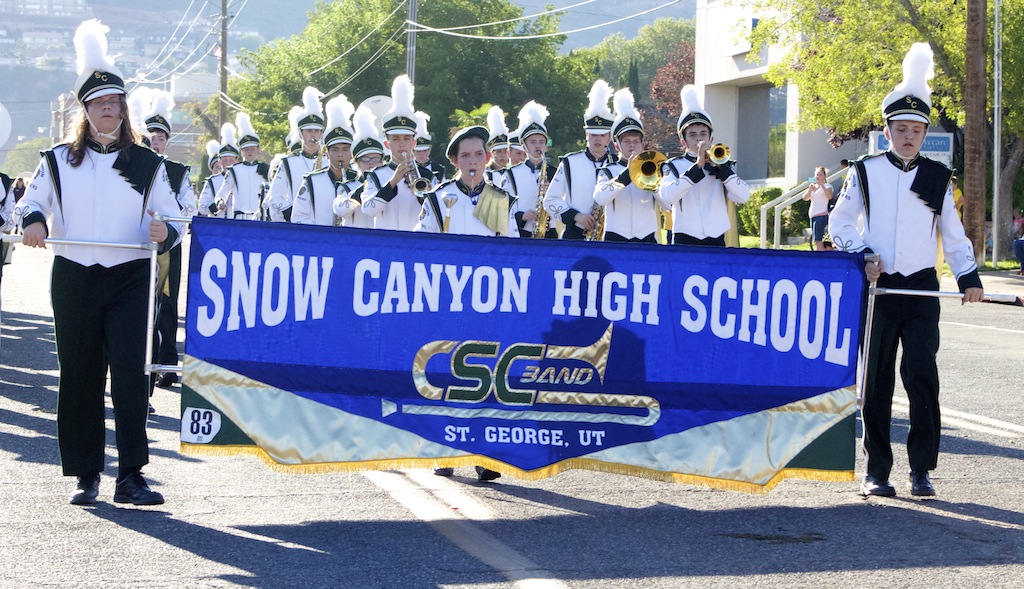 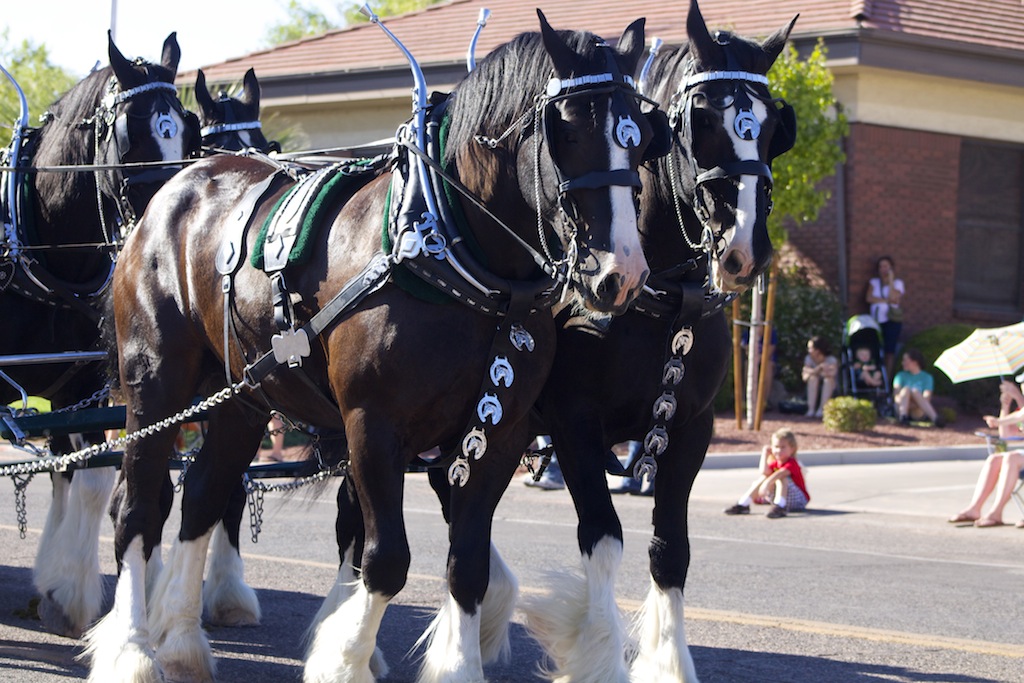 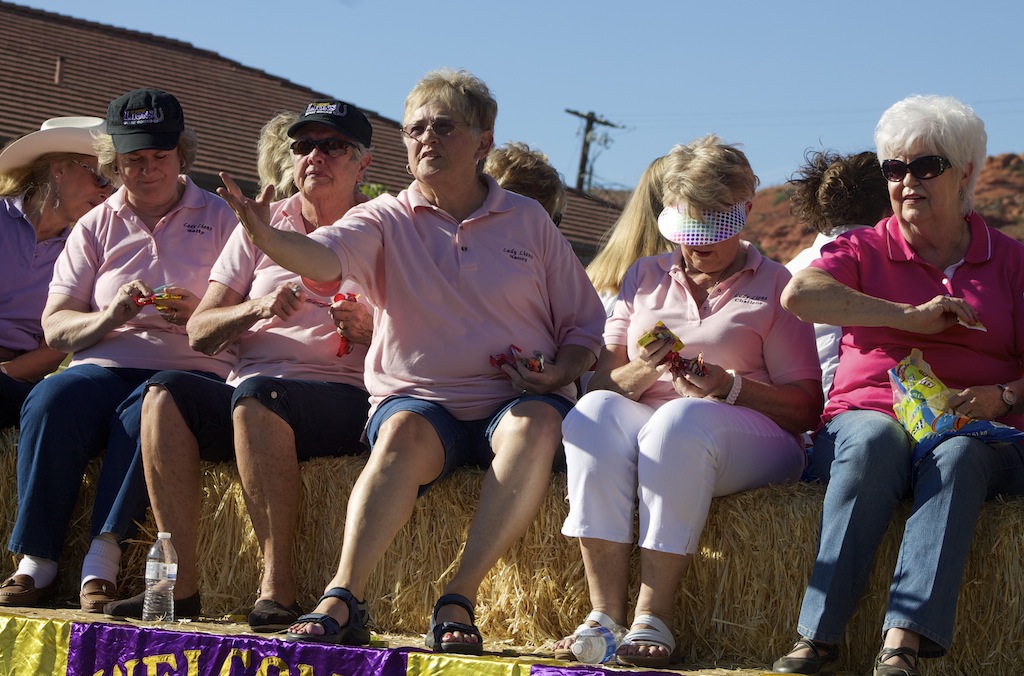 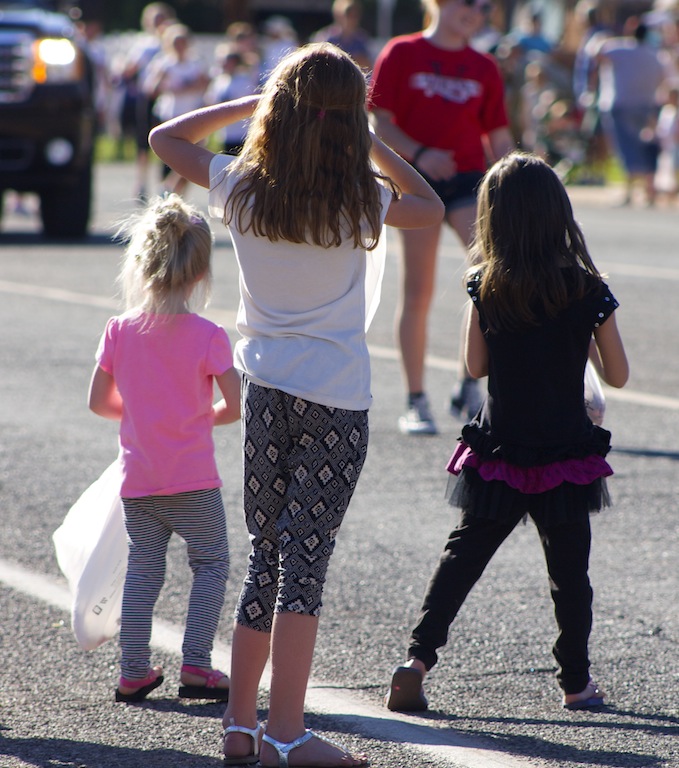 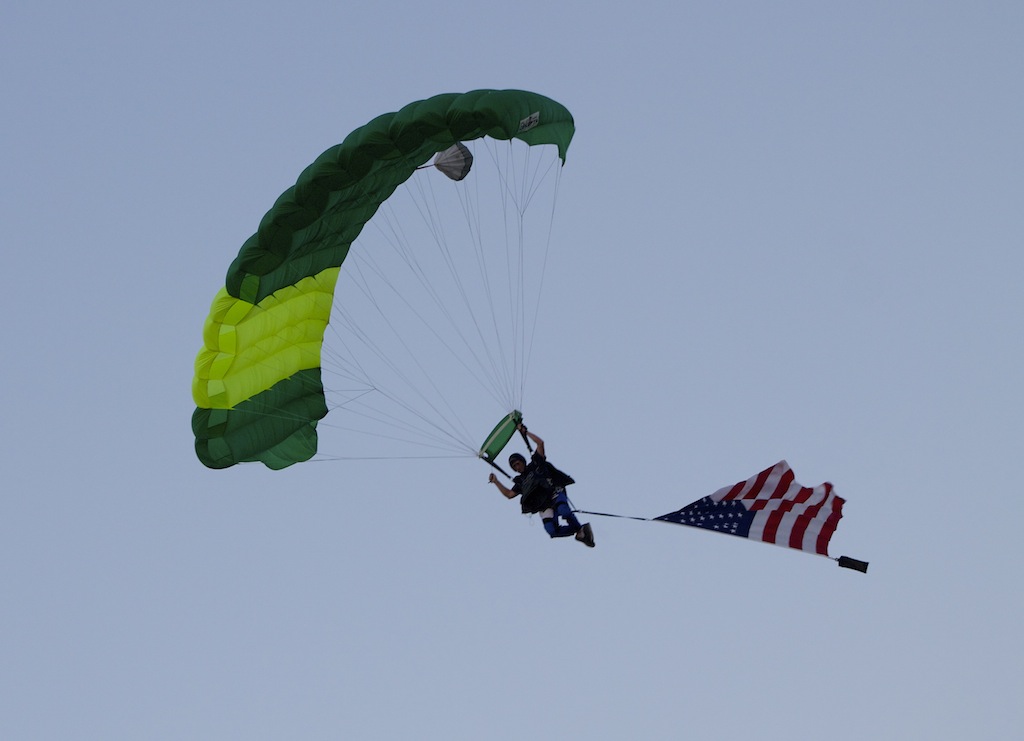 Brad Jessey has over 30 years of skydiving experience. He gracefully flew the American Flag over the Sunbowl at the Dixie Roundup Rodeo, St. George, Utah, September 13, 2014 | Photo by Samantha Tommer, St. George News 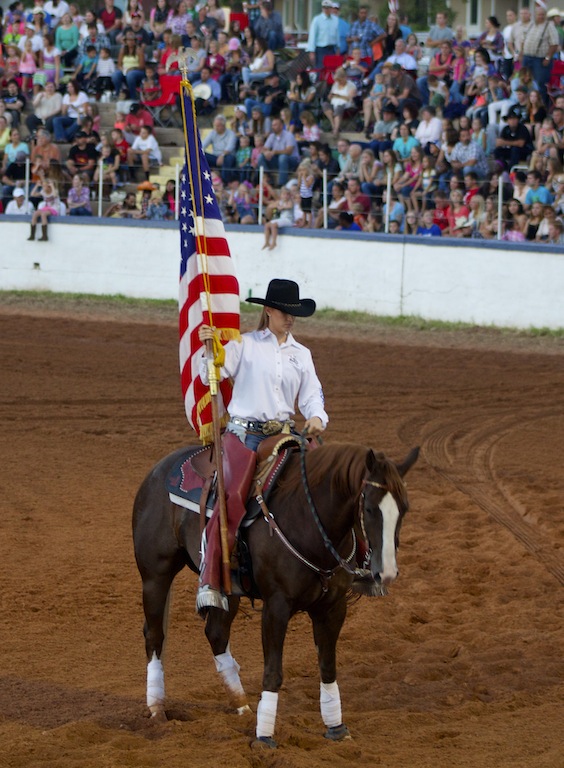 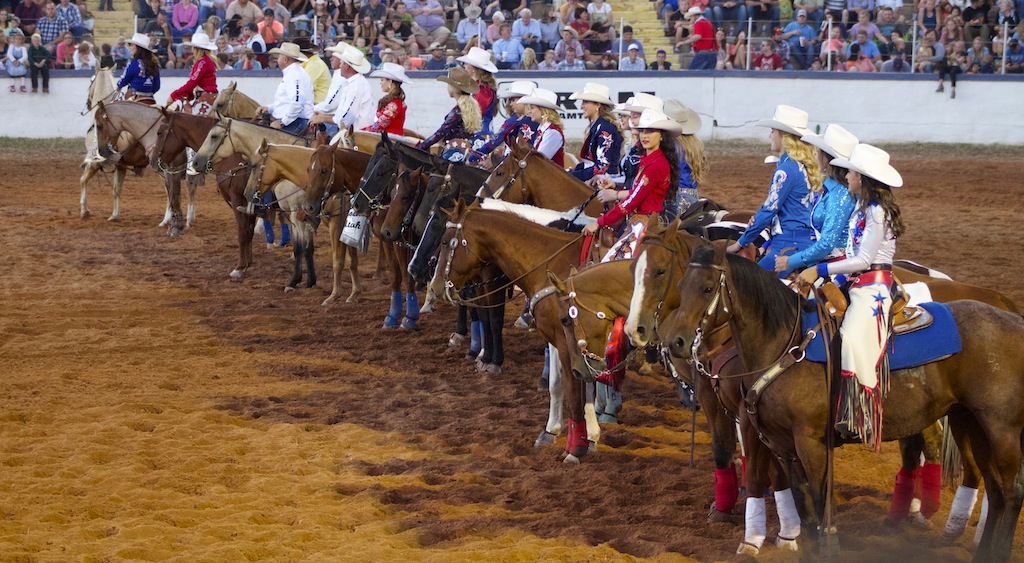 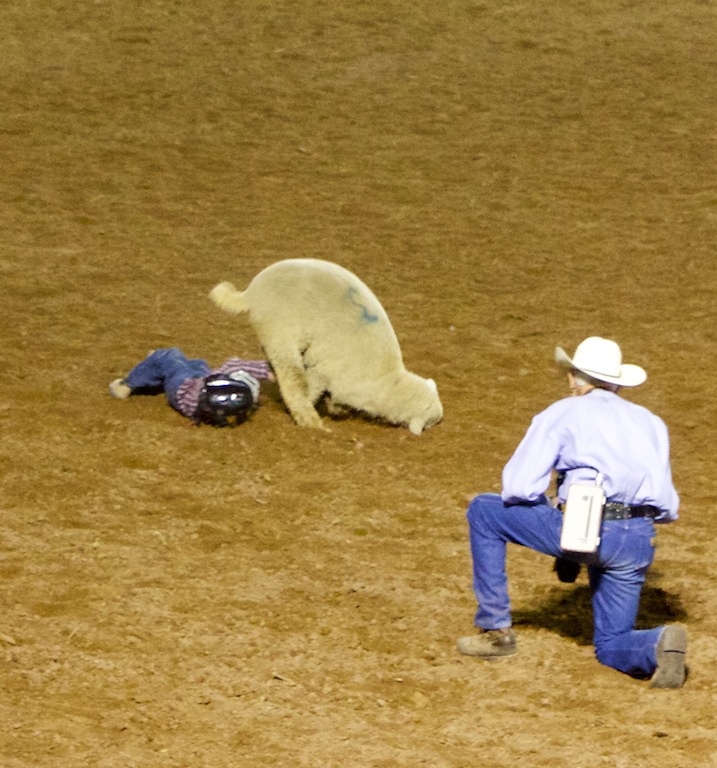 Rhonda and Samantha Tommer are a mother-daughter journalism team. Rhonda began her journalism career in 1989 and Samantha expressed interest in journalism her freshman year of college. She is now completing her bachelor's degree in mass communication and criminal justice. The Tommer team brings their love for journalism and truth in reporting to the St. George News team.