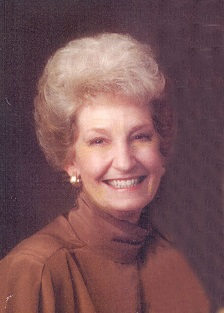 Lois Joy Hollingshead Kirk, 90, passed away in Copperton, Utah, on August 31, 2014, surrounded by her children. She was born on July 3, 1924, at the home of her parents Andrew Jackson and Lois Adelaide Roberts Hollingshead. Joy was born so close to midnight on July 3rd, that she always celebrated her birthday as July 4th. She married Jack Boyd Kirk and they enjoyed 54 years of marriage.

She was raised in Minersville, Utah and attended Milford High School where she was the drum majorette and Jack was the captain of the football team. She attended Utah State University in Logan for one year and then WWll happened. After the war ended, Jack and Joy were married and lived in California until their retirement. Joy, besides being a loving wife and mother, was a realtor as well as president of the Los Angeles Regional National Society of Delphians.

Jack and Joy returned to Utah after retirement and were sealed in the St. George Temple, following the example of her parents. They settled in Milford, Beaver, and later in St. George. Jack and Joy enjoyed their grandchildren, great grandchildren, world travel, and they were avid golfers.

After Jack died in 2006, Joy renewed her acquaintance with an old high school friend, John Douglas Ryan who helped her to sing, dance, and laugh again. In 2013, suffering from Alzheimer’s, she lived under the loving care of her oldest daughter, Paula, in Copperton, Utah.

Arrangements have been entrusted to the care of Metcalf Mortuary, telephone 435-673-4221. For condolences and funeral listings please visit the Metcalf Mortuary website.