ST. GEORGE – Despite steady improvement each year under Dixie State head coach Scott Brumfield, finishing fourth in the Great Northwestern Athletic Conference (GNAC) in 2013, and returning starters from last year’s squad, the GNAC preseason poll has Dixie State finishing sixth. Humboldt State and Simon Fraser, who were both swept by the Red Storm last year, are picked to finish fourth and fifth.

“The preseason polls are probably not based on how many starters are returning,” said Brumfield. “But on who’s not returning.” Brumfield was referring to the players Dixie State lost to graduation, notably All-American tight end Joe Don Duncan, and All-Conference performers, quarterback Griff Robles, wide receiver Mitch Frei and linebacker Jake Duncan.

“We definitely lost some talented performers,” said Brumfield. “But the preseason pollsters don’t know who we have waiting in the wings. I think we will surprise some people pretty quickly.”

DSU returns six of its top nine tacklers from last year’s defense. “We not only return vast experience on the defensive side of the ball, but we also return great leadership,” said Brumfield. “The mentality on that side of the ball is tenacious. The upperclassmen have set the tone for the developing players. Our defense will definitely win games for us this year.”

Among the returning defenders is defensive back Zac Christian, who had 45 tackles and four interceptions to earn second team GNAC all-conference honors. He will be joined in the backfield by Justin Ence, another returner with experience.

On the D-line, DSU returns all conference nose tackle Saula Taufa, who had 18 tackles. Joining Taufa on the line will be ends Jake Miller and K.J. Boyer. Bolstering the line is tackle Benson Laumatia, who previously played at Snow College. Miller had 45 tackles last year, including nine for loss. Boyer had 24 stops, five for loss.

The returning linebackers are Robert Metz and Garland Munns. Daniel Moffett, who played in the defensive backfield last year, will switch to linebacker this season. Moffett was credited with 53 tackles to rank fourth on the team. He also led the Red Storm in interceptions with four. Newcomer Drake Miller will also contribute after redshirting last year at the University of Hawaii. Metz, who also handled the punting duties last year averaging 35.8 yards, is Dixie’s top returning tackler with 58, including four for loss, while Munns had 39 stops.

Munns said he believes that the leadership void left by the graduating seniors has been filled. “We have a great senior class this year,” said Munns. “Last year it was basically taking direction from Jake and Joe Don (Duncan). But this year several guys have stepped up and are leading in the different units.”

The offense took a much bigger hit than the defense, returning only two full-time starters. They include running back Myles Burton, who rushed for 459 yards and two touchdowns, and guard Nyles Amelita.

Burton shared carries with Joel Davis, who also returns. Davis rushed for 362 yards last season. Joining them in the backfield will be Santa Ana JC transfer Hayden Gavett at quarterback. Gavett, who battled last year’s backup, Brody Garr, and Utah State transfer Ben Longshore for the starting role, threw for 1,451 yards and 13 touchdowns and rushed for 420 yards and three touchdowns in his freshman season at Santa Ana.

The most ominous task in rebuilding the offense will be at receiver. “You don’t replace talent like Joe Don Duncan and Mitch Frei easily,” said Brumfield. “But we have a platoon of players that have shown in preseason that we can continue to throw the ball without reservation.”

Jamal Smith and Conor Sklarsky each made four starts last year. Sklarsky had seven receptions and Smith had one. Antonio Morton and Brock Johnson are penciled in to start in the three-wide sets with Sklarsky. At tight end, Maurice Maxwell, Derek Whitmore and Dalton Groskreutz will compete for time. The top returning receivers are running back Davis, who had 17 catches for 177 yards, and Morton, who had 17 for 140 yards. Junior college transfer Aubrey Reed had 53 receptions for 851 yards and eight touchdowns two years ago at the College of the Redwood. Transfer Nate Stephens had 47 catches for 1,032 yards last year at Shasta, including a pair of 200-yard games. Groskreutz, who was an all-conference performer for the Red Storm basketball team, will bring that agility into the void left by Joe Don Duncan.

Groskreutz has not played on the gridiron for seven years and talked about switching courses to football after being away for so long. “There is a big difference in the conditioning for the two sports,” said Groskreutz. “But the bigger adjustment has been learning the intricacies of the offense such as learning the breaks and routes.”

Also among the key newcomers for the Red Storm are three offensive linemen — Zach Taves, John Singleton and Terrence Johnson. Taves redshirted one year at the University of Montana before playing two seasons at Cerritos. Singleton played two seasons at San Joaquin Delta and Johnson played his JC ball at LA Southwest JC. They will team with Amelita and freshman Lucas Beddow from Kamehameha High School in Honolulu.

“We have the luxury of letting our freshmen grow in our system,” said Brumfield. “But Lucas Beddow has picked up the offense very quickly and, coupled with his talent, demanded instant playing time.” Dalton Cole, Victor Woolem and C.J. Dever are also vying for starting positions and could see plenty of playing time.

The kicking duties will be handled by Alex Giordani, a freshman from West Jordan, UT.

“Our players know where we were picked (sixth) in the preseason polls,” said Brumfield. “I think they will use that to place a chip on their shoulders. They know that this is not a last-place football team. The lack of respect will give them an extra edge when it is playing time.”

Dixie State opens its season Saturday at Colorado Mesa before opening its conference schedule Sept. 13 at Central Washington. The Red Storm will have its home opener against conference rival Humboldt State Sept. 20. 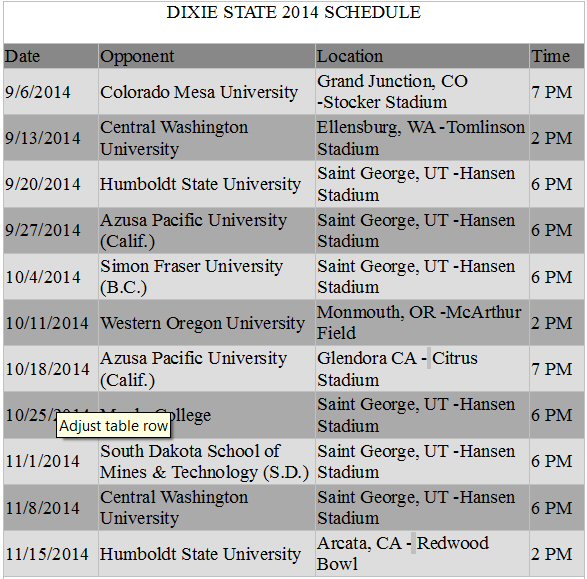 Out of state couple charged in string of thefts are sentenced