SPRINGDALE – The reward being offered for information leading to the arrest of the person or persons responsible for mutilating a Springdale woman’s cat has been increased to $5,500. The cat’s owner also said she plans to have a forensic test done on the possible DNA found underneath the cat’s claws.

“The Humane Society of Utah matched my $2,500 (reward), and friends have added another $500,” the cat’s owner, Sherry Teresa, said. “That should get someone talking!”

The Humane Society offered the reward money to assist in capturing those responsible for mutilating Teresa’s cat Khepri on Aug. 16.

The potential case of animal cruelty has had the Anasazi Plateau neighborhood in Springdale on high alert since the cat was found severed in half. Teresa said her cat was trapped, drained of blood and surgically cut in half, then his heart and lungs were removed before he was left outside her home.

When Khepri, who normally wakes Teresa up in the morning, was nowhere to be found on the mor 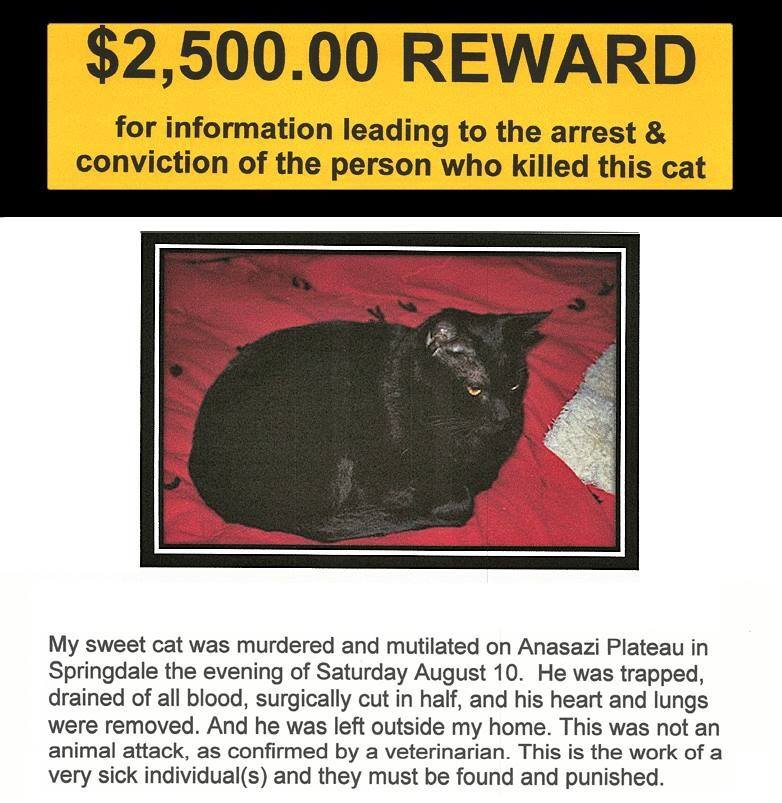 ning of Aug. 17, Teresa said she finally discovered her cat’s brutalized body outside her home. Teresa, a wildlife biologist, said after closely looking at her cat’s body, she knew the mutilation could not have been done by another animal.

“I looked at him, and I just thought, ‘This is so odd, because he’s not eaten on,’” she said. “He was cut in half, heart and lungs were gone, and there wasn’t a drop of blood anywhere, and he was laid there with his front paws crossed over each other.”

Teresa said she has seen a lot of animal kills, and typically when another animal has done the killing, you don’t find the carcass because the animal has carried if off to eat, but Khepri’s remains hadn’t been disturbed at all.

“It was like he had been gently laid there,” she said. “He wasn’t thrown, he wasn’t in an odd angle – it’s like, if he was alive, he would have been sleeping.”

Teresa’s suspicions were confirmed by Dr. Casey Wittwer after she took Khepri’s body to Zion Veterinary Clinic in Hurricane Monday morning. She said Wittwer told her, “This cat’s been killed by a human.”

The report from Khepri’s autopsy, performed by Wittwer, said all of the cat’s organs had been removed except for the colon, and there was no blood pool and no punctures on the remaining body.

Wittwer wrote in the report:

The square section of body missing appears to have been cut with surgical precision. The lines are too smooth to have been a wild animal. The remaining bone fragments from the ribs and pelvis are fairly smooth.

Due to the symmetry of the cuts and the straight lines, I suspect a knife or saw was used. The broken jaw and damaged nails are probably from the captor hitting Khepri and him fighting back.

“We have cats going missing because we have wildlife in the area – we live in the mountains,” Brecke said. “But no, we have not ever found a carcass before.”

“I will be keeping the DNA samples,” Teresa said, “and will have it tested myself.”

Anyone with information regarding this incident is asked to contact the Springdale Police Department at 435-772-3434.

St. George News Year in Review: Most read and notable stories of 2019

Zion to resume shuttle services over the holidays

Traffic stop on I-15 leads to $4.1 million meth bust -- the largest in Arizona DPS history