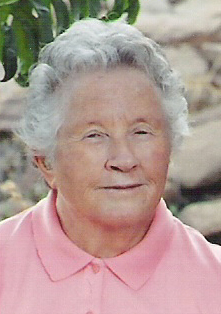 Verda Louise Terry Stewart passed away from illness related to age on August 18, 2014 at the Beehive Home in Hurricane, Utah.

Verda was born March 22, 1927 to Amos F. Terry and Eunetta Elliker in Delta, Utah and was number 9 of ten children. When she was young her parents moved from Lehi, Utah to Santaquin, Utah to Payson, Utah and finally settled in Enterprise, Utah where Verda spent the majority of her growing up years.

She attended school in St. George one year while her parents served a temple mission, and graduated from Woodward Jr. High School. When their mission was complete they moved back to Enterprise where Verda graduated from Enterprise High. She worked picking up potatoes in the fall during her growing up years, to earn money for her school tuition, clothes and other needs and wants.

She met Robert Nelson Stewart in 1946 and they were married that year on July 31st. The early years of their marriage moved them from Provo, Utah to LaVerkin, Utah, to work on the railroad in Acoma, Nevada and back to Enterprise, before settling in St. George to manage health needs of one of their children in a warmer climate.

Verda was an active member of the LDS church and served in many callings through the years, including primary, scouts, MIA, and Relief Society. She and Robert served a mission in the Portland Oregon Mission from 1988-1989 and a mission in the St. George temple after their return from Portland, until health issues required a change.

Verda was a good cook and spent 22 years in the Washington County School Lunch program. She loved music and was in band in high school, but her favorite music was singing. She and her three best girlfriends sang in the halls at school, down the streets of town, and performed at most of the events in Enterprise. She would tell stories of crowds gathering if they practiced outside in someone’s yard. The world was a quieter place then and they could be heard all over town. As Verda got older her voice gave out and she experienced a great hearing loss. Those two changes were the most difficult things she had to bear, especially where music was concerned. She took up oil painting later in life and found a great deal of joy in creating beautiful scenes on canvas. Then as her eye sight failed she felt that loss, those paintings became cherished possessions. Her greatest joy was in her husband, her children, and her grandchildren.

Bob and Verda moved to the Beehive Home in Hurricane, Utah in December 2012 when care at home became difficult to manage. The family wishes to extend appreciation to the caring staff and residents at the Beehive Home, also to the caring members of the Hurricane 15th ward and St. George 10th ward, and beloved friends in their St. George neighborhood that was home for over 57 years, visiting teachers, and caregivers throughout the years from Southern Utah Home Health, the Five County Association of Governments, Applegate Home Health, and Dixie Home Health and Hospice.

Arrangements entrusted to the care of Metcalf Mortuary, 435-673-4221. For condolences, full obituary, and funeral listings please visit our website.

'Sometimes a person just wants the other person to stop:' Police, advocates educate on stalking