He knows the facts. Payson hasn’t had a winning season on 35 years, including when he played for the Lions. The team lost all six of its region games last season by an average score of 34-15. The Lions’ only win in 2013 was against Provo, which finished last in 4A’s Region 8 with zero region wins. Payson hasn’t had an all-state player in more than four decades.

He knows all that, and he hears the whispers, that his team can’t compete with the southern Utah teams, that Payson may be headed to a smaller division next year if the rumored new realignment is based on program success, that the media and coaches picked the Lions to finish dead last.

But none of that matters to him and his players. Because Chapman also knows that Payson has a talented and strong-armed quarterback returning in Easton Smith, an all-region caliber linebacker in John Harmon back as well. He also knows Payson has four state championships (that’s four more than Pine View and Cedar and three more than Desert Hills and Hurricane). And he also understands that his team had a pretty good shot at winning three of those six region games last season.

“We were in every game except for the one at Desert Hills,” Chapman said. “In those other ones, we didn’t feel completely overwhelmed. It’s an experience our kids can look back on and know that they’re good enough.”

With Harmon (more than 200 tackles the last two years) anchoring a defense that should be good at linebacker and in the backfield, the Lions hope to compete with pass-happy Pine View and Dixie. Stopping the run could be another story with a whole new group on the defensive line.

“We’ve definitely got some holes to fill,” Chapman said. “We will be smaller than just about everyone we play, but we will also be athletic.”

Smith, who passed for 2,118 yards and 15 touchdowns last year, may have to work on getting rid of the ball quicker, especially with the overhaul on the line. But he certainly has the tools to get the job done.

“I guess it’s heredity,” Smith said. “I work hard at it, but I don’t know where I got my strong arm from.”

Harmon said it may be simply a matter of attitude in getting things to improve from last year’s 1-9 record.

“It’s up to us as senior leaders to keep things positive and upbeat,” he said. “We’ve got to be out there and be upbeat, even when things don’t go our way. That could make all the difference.”

Smith will certainly have tools at his disposal. His top receivers from last season are back in Preston Little and Dannel Brown, plus running back Phil Perez was an offensive threat. Tight end Dalton Baker is a perfect safety valve for Smith as well. Harmon also played fullback last year, though Chapman said Harmon may best serve thwe team as an offensive lineman in 2014.

The talk surrounding the team at the 3AA South Media Day event was about chemistry, with Payson’s core group of returning starters (five on each side of the ball) having played together for most of their football lives.

“Yeah, we have been together a long time,” Harmon said. “We’re really close on and off the field and know each other inside and out. I think that helps us.”

Wins will not come easy in the strong 3AA South for the Lions, and depth is a real issue with many players on the field for offense and defense. An injury to a key player (say Harmon or Smith) could prove devastating. But with the top three teams from last year all at home (Dixie, Pine View and Desert Hills) this season, the Lions could do some damage. 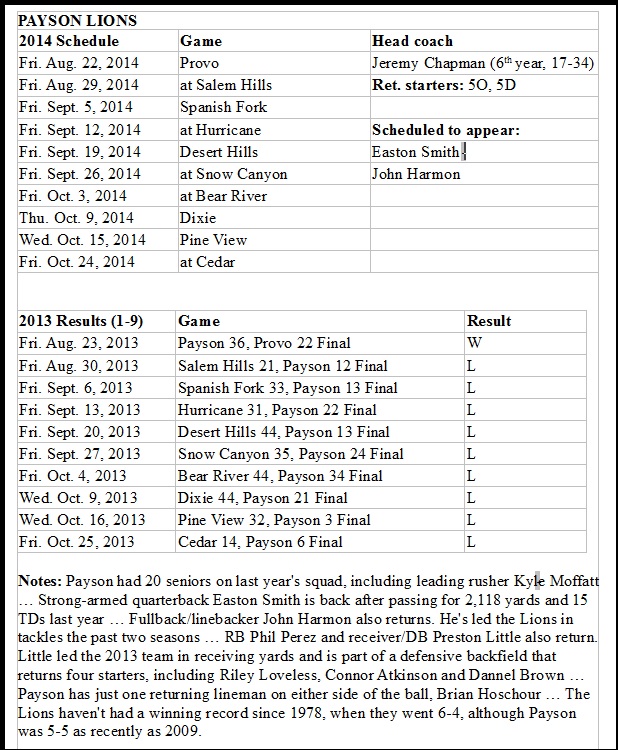