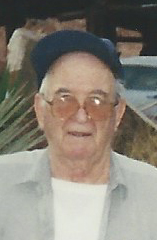 Robert (Bob) Edward Ralston passed away on June 24, 2014, at his home in Springdale, Utah. He was born on Jan 10, 1922, in Schaghticoke, a small town in upstate New York. Early in life he showed an interest and a knack for fixing all things mechanical.  He loved and could fix cars, motorcycles and, after high school, he started to learn how to fix and pilot airplanes. He was the valedictorian of his high school class and entered college at Rensselar Polytechnic Institute, but a lack of money and WWII changed his plans.  When he joined the military he was placed where his skills would do the most good, fixing airplanes and training others in the fine art of “making do” -fixing things even when you do not have all of the right parts or equipment.

After the war Bob developed additional skills he could use anywhere; becoming a barber and learning to tend bars. He put these skills to work earning enough money to finish college.  After graduation, Bob started his career as a USDA meat inspector but still gave hair cuts to his nephews.

The most transformative event in his life, after WWII and the great depression, was meeting and in 1960 marrying Violet Bean, a native daughter of Springdale.  They lived next door to his mother for many years in Garden Grove California, before he retired from the USDA and moved with his mother and Violet to Springdale. But he kept working even after retirement – fixing almost anything from refrigeration systems to washing machines.  He also kept his “make do” skills, designing and building a water powered hydraulic lift so his elderly mother could get in and out of the tub, and modifying the house with hand rails on the walls and tracks in the ceiling with slings so his wife could get around by herself as much as possible after she lost a leg.

Bob started a new career when he was twice elected as mayor of Springdale in 1981 and again in 1989.

He is survived by his a sister-in-law, Ruth Ralston, and six nieces and nephews: David, Edward, Andrew and Thomas Ralston, Margaret Ralston Shadowen, and Deborah Ralston Ziemer.

Here & there: A mother's prayer for no hate