SANTA CLARA – Living among Southern Utahns today is one vibrant 94-year-old who proudly flies the American Flag in front of his Santa Clara home, teaches fencing at Dixie State University and possesses first-hand memories that few alive still have.

Daniel Nevot’s is a remarkable history. He is the last living member of Forces Français Libre, or Free France, which was formed in 1940 to help American and British allies defeat Germany – service for which he was recently honored in France. He has enjoyed U.S. citizenship for over four decades.

Daniel Nevot gave St. George News a look at his yet unpublished “Memoire of a Free French Soldier,” and shared some of his memorable story after returning from a visit to France last month where  he and his wife Helen attended a dinner in his honor as the last living member of the original Free France resistance team member. There he was honored with a gold ring and a replica flag, and invited to attend inspection on the French military bases.

“Free France was a resistance team of about 600 people who joined together after General Charles deGaulle rallied the troops in England,” Daniel Nevot said.

Germany had already occupied France, but deGaulle persuaded Winston Churchill to allow him to address the French on B.B.C. radio. In his speech, deGaulle reached out to the French who were in London:

Daniel Nevot, being a true patriot to his then country France, was number 183 on this list of volunteers to free France. His first mission was to Africa in 1940 at age 20. He traveled to Senegal, Gabon and Congo.

Upon arriving at Dakar, Senegal, on the ship Westerland, Degaulle sent Nevot and other members of the team ashore on a small boat. The team was forced to turn back as they received fire from the French ship the Richelieu.

The Westerland then sailed to Gabon, where the resistance team met up with Commandant André Parant, who supported the efforts of the Free France movement.

From Gabon, Nevot and part of the team traveled by train to Brazzaville, Congo, where they met with the Tirailleurs, black colonial riflemen of the Regiment Tirailleurs Senegalese du Tchad. Free France forces and the Tirailleurs became war partners as they worked together.

Trucks, weapons and ammunition, mostly of World War I vintage, were loaded onto a shallow river boat. The ally troops boarded the boat for a two-month trip up the Congo River to Bangui, where the boat was offloaded of their supplies for a 400-mile trek through the jungle to Ft. Auchambeau in Chad. It was a month-long  journey.

“There was a panther who wanted to make us her dinner,” Daniel Nevot said. “Three of us tracked her and shot her.”  Though the Tirailleurs enjoyed her meat for dinner, Daniel Nevot took one of her claws and later had it made into a pendant which he still wears around his neck.

The Free French team was referred to as the “Clouchard of deGaulle,” or “the homeless of deGaulle.” The men were fighting to free their homeland, Daniel Nevot said. “We had no uniforms.”

While the team was at Ft. Lamy in Chad they were met by Col. Phillipe Leclerc, who would lead the Free French resistance team. A reconnaissance mission led by British Major Henry Clinton joined forces with the Free French team as they were under attack by a group of Nazi partisan Saraians who forced the French and British allies to retreat at fort El Tag at Koufra Oasis.

But, at El Tag, after several weeks of fighting, the Nazi Italian forces surrendered to the Free French resistance team, African Tirailleurs and about 35 European officers.

In another operation, Daniel Nevot was assigned to capture Fort El Gatroun. An Arab national was sent into his village to borrow some of the native clothing. Daniel Nevot and his counterparts used the robes to disguise their clothing and guns. The headdresses concealed their light-skinned faces and hair, and goggles were used to hide their blue eyes.

Lt. Dubut and one other officer entered the fort and went to the commandant’s office while Daniel Nevot kept watch outside the door. They ordered him to surrender and fired a shot into the ceiling to prove their point, which he did.  The gunshot alerted another soldier who tried to storm Daniel Nevot, but Daniel Nevot shot him. That was the only casualty of the operation.

The commandant was told to order his soldiers to the courtyard. It was siesta time in the heat of the day. As the soldiers sleepily entered the courtyard they were ordered to surrender to the Free French. Daniel Nevot received an award and was promoted to the rank of corporal for his role in the operation.

By 1942, the Free France Resistance had helped to secure Tripoli, Libya and Tunisia. After a long-needed rest Daniel Nevot’s team was sent to Morocco. Once there the team received uniforms.

“We were no longer considered to be ‘the homeless,'” Nevot said. They had earned respect from their allies. It was in Morocco and Algeria that the Free France Resistance prepared to retake France.

In July of 1944, the resistance sailed to England to prepare for the invasion of France. They landed on Utah Beach in August, after the initial D-Day landing. Daniel Nevot was assigned to the second armored division, and took position on the left flank of Gen. George Patton’s forces.

The forces battled their way to just outside of Paris. They experienced heavy fighting and had many casualties. They took heavy fire from the “Vichy,” those French who were under German occupation and fought with the Germans against the allied forces.

As the troops entered Paris, they headed to Notre Dame Cathedral and the Echole Militaire. They were met by cheering crowds as they traveled through the city. Daniel Nevot traveled to his home village to check on his parents. He found that, though his father had been arrested by the Nazis, his family was safe and moved to another village that was safer.

He was informed that the Nazis had moved out of his village about an hour before his arrival.  As he and others traveled on their Harley Davidson military issue motorcycles, Daniel Nevot’s sister Yvette recognized him from the side of the road and started yelling his name. Daniel Nevot had not seen any of his family for several years, he said. He and his sister were so relieved to find one another in the crowd and chaos.

From France, the resistance team headed to Germany. The main goal was to liberate Strasbourg. This goal was set in Fort El Tag in Koufra, during General Leclerc’s Serment of Koufar (Pledge of Koufra), when the general stated: “We will not lay down our arms till the Colors, the beautiful Colors, fly from the steeple of Strasbourg Cathedral.”

This pledge was fulfilled on November 27, 1944, as one of the Free France soldiers scaled the steeple of the cathedral and secured the Tricolor French flag at the top. The Free France forces continued fighting alongside American soldiers as they pressed into Munich, Germany.

Though Hitler had committed suicide by this time, there were still small battles to fight as they headed back to France.

Daniel Nevot is a fencing master and taught fencing at St. Marks School of Texas from 1964 until 1988.  He currently teaches fencing at Dixie State University. He and his wife, Helen, married in 2006.

In 2010 the Nevots hired craftsman Stan Watts, from Kearns, Utah, to create a statue depicting a 20-year-old Daniel Nevot and an African Tirailleur, battling side by side to represent the common soldiers.

“There are statues of the generals, but no statue to represent those people,” Nevot said. The statue now stands at Chad Marine Infantry Regiment in France. 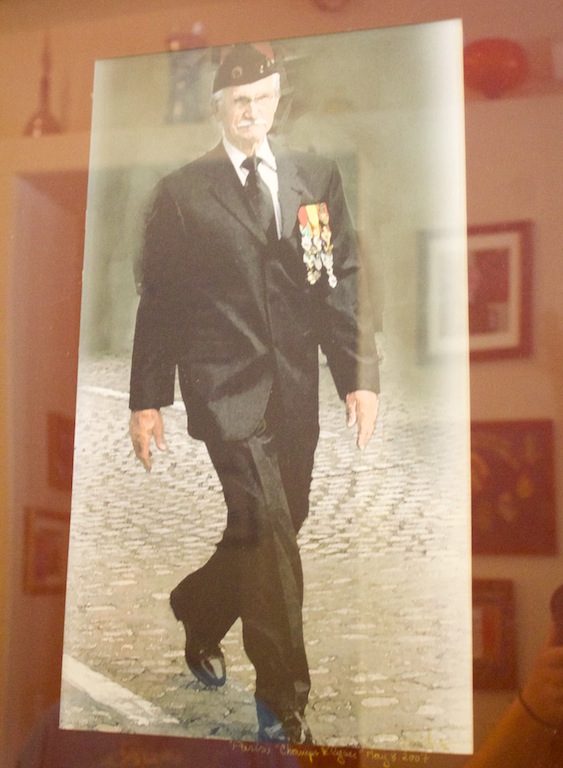 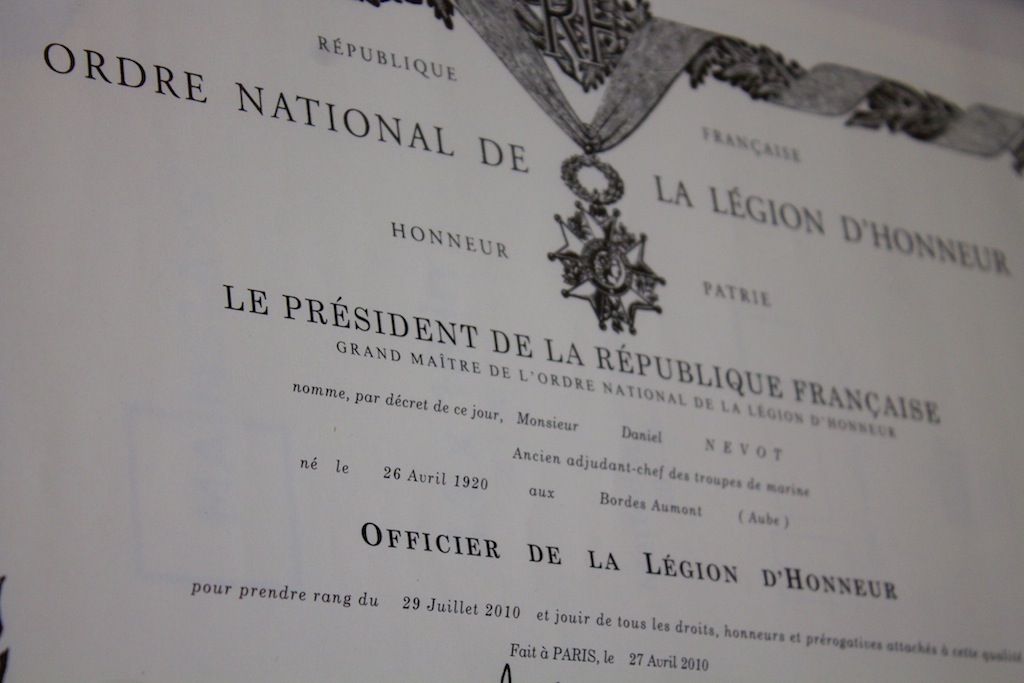 One of the many awards received by Daniel Nevot from the French Republic. Santa Clara, Utah, May 23, 2014 | Photo by Samantha Tommer, St. George News 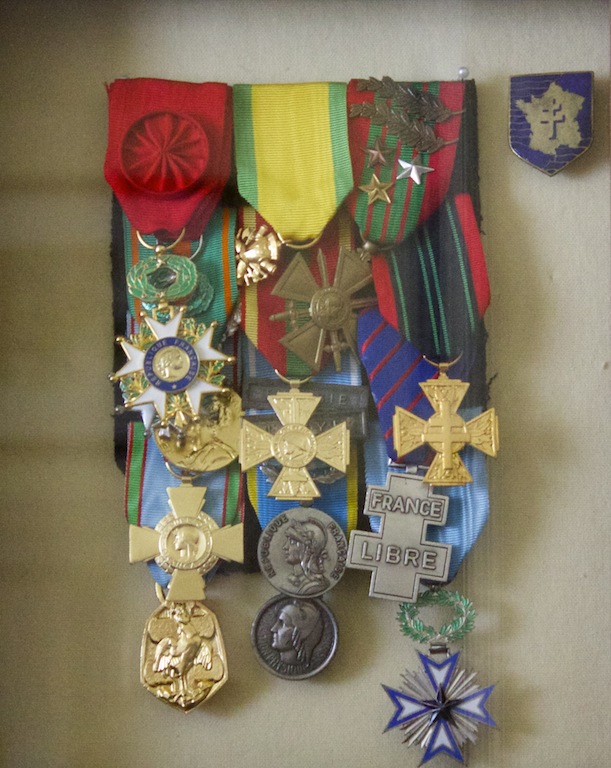 A collection of Daniel Nevot's medals is displayed on the wall in his office, Santa Clara, Utah, May 23, 2014 |Photo by Samantha Tommer, St. George News 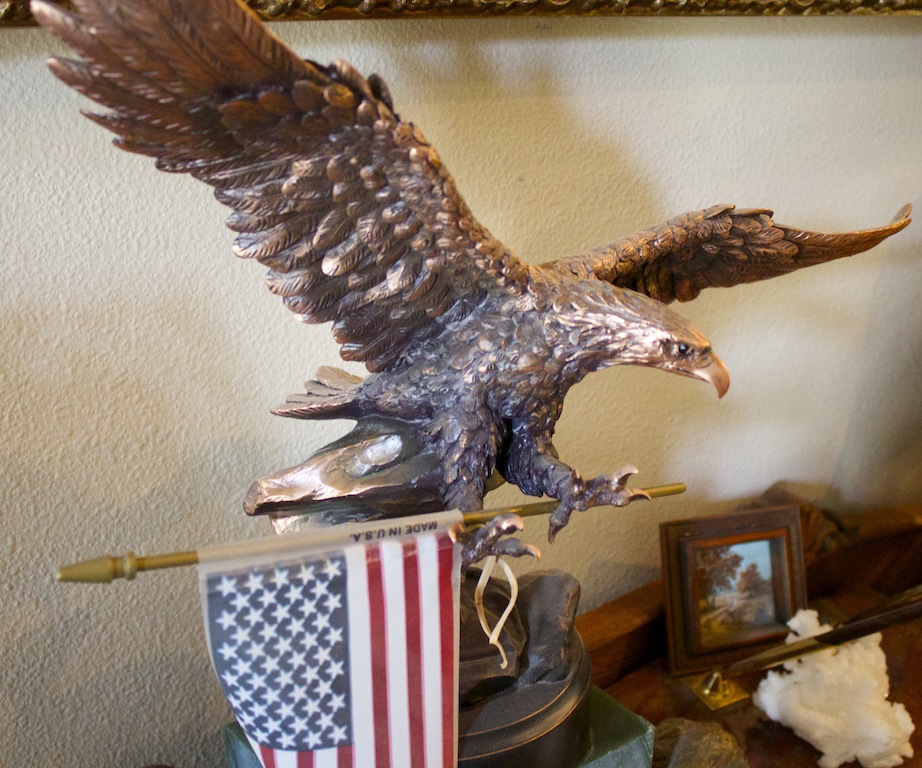 Daniel Nevot flies the American flag in front of his house and showcases this American Eagle inside his home. Santa Clara, Utah, May 23, 2014 | Photo by Samantha Tommer, St. George News 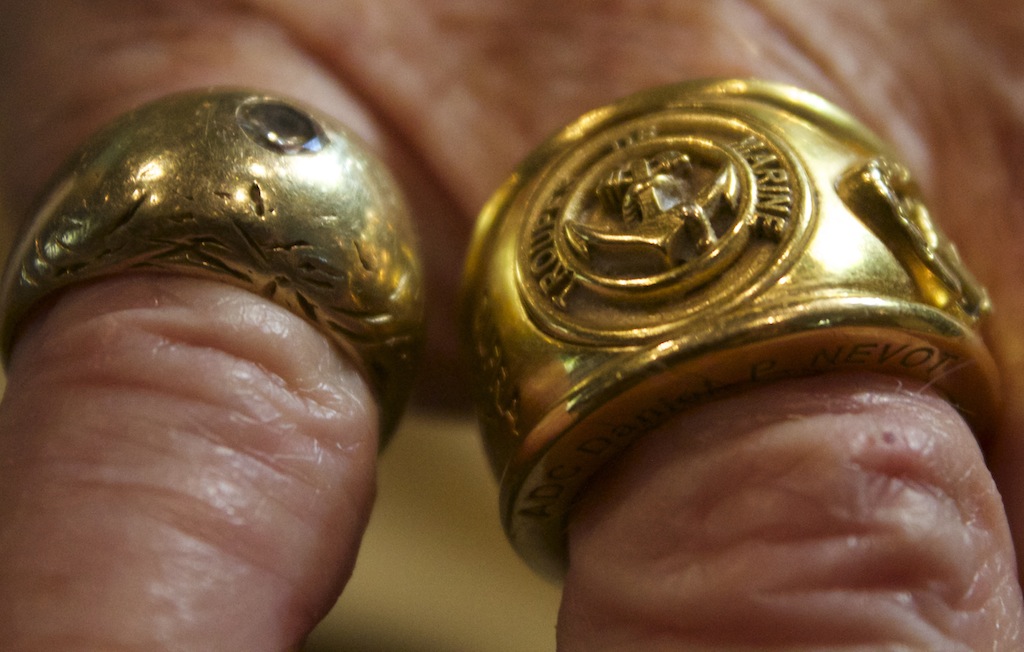 The ring on the right was awarded to Daniel Nevot in April 2014 at a reception held in his honor in France. Santa Clara, Utah, May 23, 2014 | Photo by Samantha Tommer, St. George News 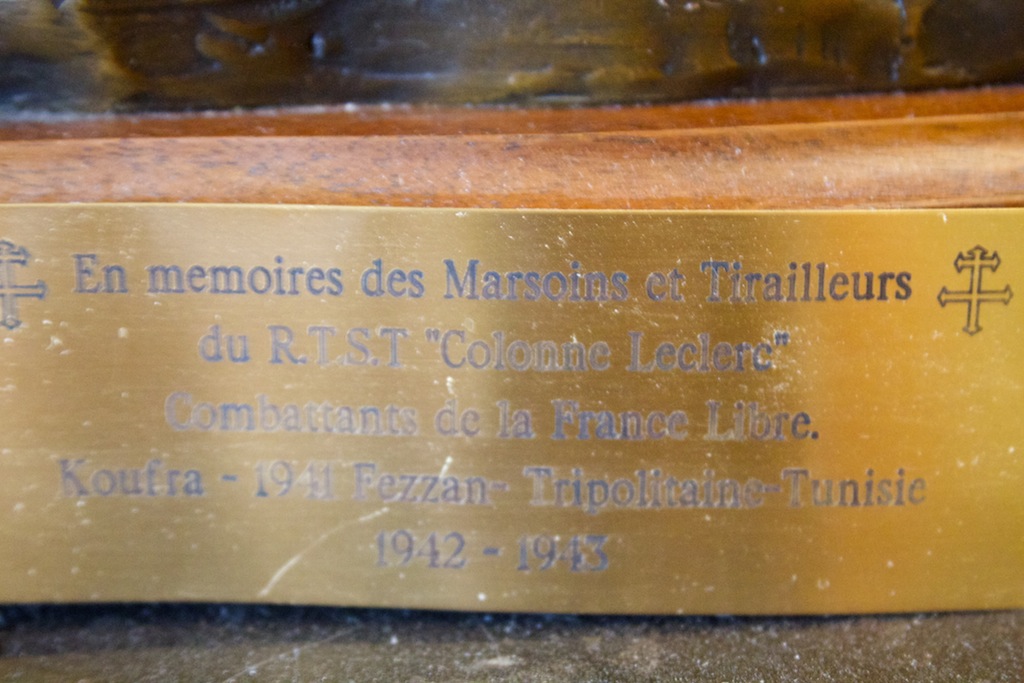 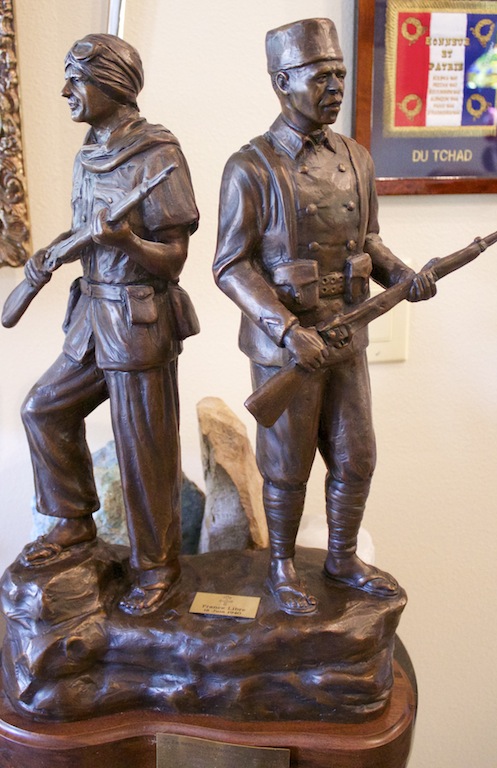 Daniel and Helen Nevot had this statue crafted by sculptor Stan Watts of Kearns, Utah. It was a gift to Chad Marine Infantry in France to honor the common soldier. Santa Clara, Utah, May 23, 2014 | Photo by Samantha Tommer, St. George News 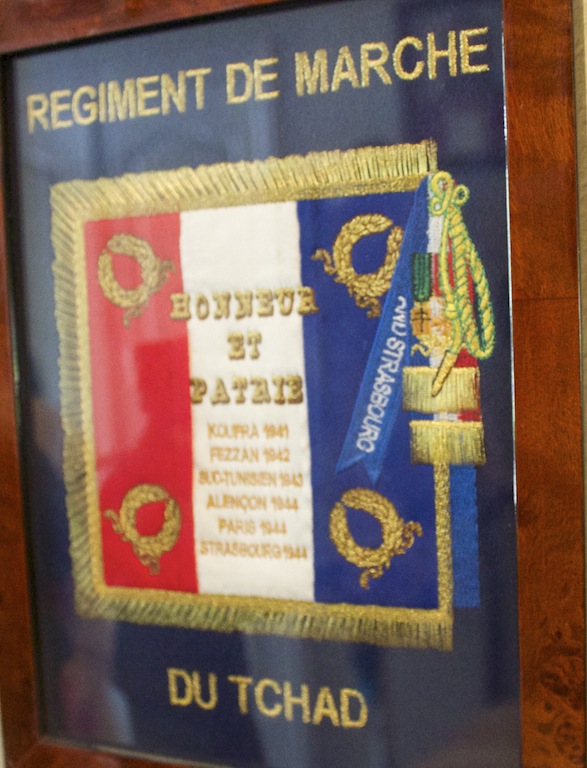 This banner lists all the places that the Free French fought, Santa Clara, Utah, May 23, 2014 | Photo by Samantha Tommer, St. George News 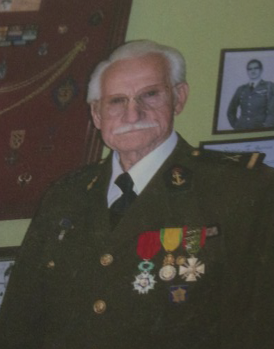 Daniel Nevot in his military uniform with some of his medals, Santa Clara, Utah, May 23, 2014 | Photo by Samantha Tommer, St. George News

Rhonda and Samantha Tommer are a mother-daughter journalism team. Rhonda began her journalism career in 1989 and Samantha expressed interest in journalism her freshman year of college. She is now completing her bachelor's degree in mass communication and criminal justice. The Tommer team brings their love for journalism and truth in reporting to the St. George News team.

Letter to the Editor: Dixie State provost on providing access, opportunity as an open, inclusive university