ST. GEORGE —The Dixie Rebels have gone to the championship game in the Rocky Mountain Football League three out of the last four years, winning twice in 2010-2011. They will look to climb back on top this season with several mainstays from last year and an infusion of new talent.

Taking over the coaching duties this year will be Dr. Dale Stott, who coached for several years at Pine View High School. “I am excited about this team. I have been coaching football since 1983 and I can’t remember ever having a bigger or better collection of talent,” Coach Stott said. “If I don’t mess things up, we could be pretty good.”

Quarterback: Last year’s starter, Chad Draper, is unfortunately no longer with the team due to work schedule conflicts. He will be replaced by Misiovala Tupe, a former standout linebacker at Texas A&M and a member of the 2014 Men’s National Championship 7-man Rugby team. Tupe played at the quarterback position last year in wildcat formations. Also playing QB will be Alec Mecham, a former all-state high school quarterback at Pine View.

Running back: Former Dixie State standout, Sione Tapuosi, last year’s leading rusher in the RMFL, returns at the fullback position. Rimo Mapu will start at tailback. Villiami Hafoka and Elijah Earl will also get some carries.

Wide receiver: Tanner Wood, a former Pine View player, was the team’s leading receiver last year and should continue to be one of the main targets. Brennan Adams will return at another receiver spot. Both players were in the top five in receptions in the RMFL last year. They are joined by James Thompson, the veteran and leader of the group, who did not play last year. Other receivers include Phil McLeod, and newcomers Brandon Wardle, Dudley Leaupepe and Rex Doman.

Tight end: Dixie State alum Jordan Loo is the starter. His back up is Robert Robledo, who was the starting tight end last year.

“With our fast paced offense, I plan on using all of my offensive linemen to keep them fresh,” Coach Stott said. “I am still figuring out which five to start, but it’s really nice to have so many good options.”

Linebacker: On the outside, Doug Roberts, who played collegiately at New Mexico and played for the Wasatch Revolution last year, will start. Andrew Misa and Danry Hargest are competing for the other starting OLB spot. The inside spots will be manned by Kaleo Teripaia and D.J. Vargas. Newcomer Stephan Cook will also see extended playing time.

Secondary: Tupe will go both ways starting also at free safety. Defensive team captain Brandon Thompson will start at strong safety. Hurricane High grad, Trey Smith, will start at one corner, and the other corner will have either Dom Vargas, Tarnu Ali, Prentiss Miller, Jay Prior, or Adam Parr as the starter, with the non-starters seeing plenty of action in relief and nickel packages.

Special Teams: Eric Brooksby, a Skyview graduate, will start at kicker. The holder is AJ Martinez and the long snapper is Mark Egbert who snapped for SUU. The punter is James Thompson.

The Rebels first game is Saturday, March 22, at Dixie High School against the undefeated Las Vegas Trojans. It is an exhibition game against the top team from the Wild West Football League and the #5 nationally-ranked semi-pro football team. Game time is at 6 p.m. and tickets for 12 and older is $5. 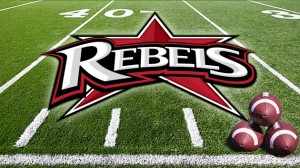