The Utes have won as many as they’ve lost,
But the five hundred line they need to cross.
Anything can happen with two games left,
Will they excel, or fall in with the rest?

COMMENTARY — After pulling away from Colorado in the second half last Saturday to win its last home game, Utah is now 8-8 in conference play.

For those of you familiar with Seinfeld, the Runnin’ Utes are basically playing the role of Jerry Seinfeld as Even Steven — somehow it all just balances out to the middle for Utah. I guess that would make USC Elaine Benes — a once proud program that has fallen on hard times, with the potential to change its fortunes in future seasons. Arizona State would be George Costanza — a street smart team that has taken advantage of opportunities to rise into the top tier, but could easily flip-flop with USC in years to come. 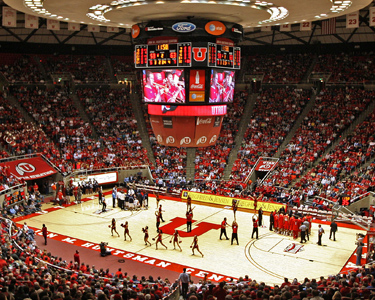 With two games left, the seeding for the Pac-12 Tournament is still up for grabs, with a big log jam in the middle. Currently, fourth place through ninth place remain undecided as Stanford, Colorado and Cal all have nine conference wins each, followed by Oregon, Utah and Washington with eight conference wins each. Utah is definitely in the hunt. Notably, Utah closes out the season with road games against Cal and Stanford. Buckle up and keep your arms and legs inside the ride at all times because the remainder of the season, as well as the Pac-12 Tournament, promises to be one wild ride!

Basketball is not the only thing happening on The Hill lately. Spring football is only a couple of weeks away and will start on March 18.

It will be very interesting to see who will end up under center at the QB position come opening day in the fall. Spring ball could go a long way toward settling that decision.

The Utes haven’t had solid QB play since Brian Johnson graduated after the 2008-09 season as the winningest QB in Utah history. Not coincidentally, there has been precious little depth or competition at the QB position since Johnson stepped off the field. It looks like feast or famine for Utah as there are a number of QBs in camp who could emerge as the starter on opening day.

Let’s start with last year’s starter, Travis Wilson. “Travis’s most recent studies have all been stable, he has been cleared to return to non-contact practice with the team and will be re-evaluated in July,” said Utah team Dr. David Petron, M.D. Of course, QBs are basically off-limits for contact in spring ball anyway. However, I’m a little concerned at having to wait for a re-evaluation in July — are we talking early July or late July? If the Utes have to switch horses, I don’t want to be doing so in August with a new offensive coordinator in the fold and a quarterbacks coach who used to be a wide receiver.

Even if Wilson is eventually cleared to play, it is not necessarily a given he would be the best QB on Utah’s roster anyway. Conner Manning, Brandon Cox and Micah Thomas are all coming off of redshirt years and will compete for the starting position. Add in two transfers in Kendal Thompson and Jason Thompson, and things start to get very interesting.

As a high school junior, Manning broke Matt Barkley’s Orange County, Calif., record for passing yards in a single season with 4,219 yards. Over the course of his high school career, Manning passed for 88 touchdowns with 26 interceptions. Manning may not be the running threat that Wilson is, but Manning can still move well and escape the pocket when necessary. However, Manning has the potential to be a much better passer than Wilson, and I would prefer that Utah’s QB leave the running to the big dogs in the backfield anyway.

Brandon Cox is a pure athlete, who also played basketball and baseball in high school at Pasadena High. While not quite the passer that Manning is, similar to Wilson, Cox can run and make plays with his feet. As a true freshman, he began last season as the co-backup behind Wilson at QB, but ultimately redshirted his freshman year.

Micah Thomas was a highly-recruited QB out of Texas. However, last year when Wilson was out and Adam Schulz was the sole active QB, only Manning and Cox were seriously talked about as possible successors in the event that Shulz got hurt before the season ended.

Just last Wednesday, Utah announced that Oklahoma QB Kendal Thompson will be joining the Utes after graduating from Oklahoma in May. With two season of eligibility left, Thompson will be eligible to play immediately as a graduate student for Utah.

And let’s not forget Adam Schulz, who finished as Utah’s starter after Wilson was hurt.

Dwayne Vance is a sports columnist. The opinions stated in this article are his and not representative of St. George News.