ST. GEORGE — Desert Hills ripped through another opponent, this time Hurricane, and the Lady Thunder are on the verge of clinching Region 9 with still two weeks left in league play.

Thursday night DH dismantled the Lady Tigers, 69-39. It was a double-digit lead before most people had settled into their seats and by halftime it had swelled to 39-16, and that was with star center Haley Bodnar sitting out the entire second quarter.

“We have definitely been trying to force the tempo more early in games recently,” Desert Hills coach Chris Allred said. “Especially defensively, we’ve been trying to turn up the pressure a little more.”

There’s no doubt Bodnar and point guard Blair Bliss are the leaders on this senior-laden team of stars. But the emergence of a pair of young stars has also given Allred and his staff some flexibility and depth, as evidenced by the second quarter Thursday night. Freshman Ashley Beckstrand and sophomore Kenzie Done put on a show, scoring 16 of the Thunder’s 20 points in the quarter. Beckstrand hit back to back 3-pointers to start the quarter and Done had a couple of fast-break layups and closed the half with a buzzer-beating 3-pointer. The two youngsters outscored Hurricane 16-9 by themselves.

“We just want to focus on keeping getting better,” Beckstrand said. “We want to prepare well for each game and see what we can improve on.”

Bliss had her moment in the sun as well, seizing personal control of a three-minute stretch of the game in which she had four steals and four layups at the end of the third quarter and the beginning of the fourth.

“She has almost a triple-double every time out,” Allred said. “And she doesn’t even have to do it with scoring. She often leads us in rebounding, assists and steals. She’s like a rocket when she gets the ball out of there after a defensive rebound. The girls run the floor because they know she’s going to get it down court and get it to them in a hurry.”

This was supposed to be a tight battle between the first-place titans and the up-and-coming challengers, but D-Hills quashed any upset notions early, starting the game on an 11-0 run. Bodnar, at 6-foot-4, is at least five inches taller than anyone on Hurricane’s roster and it showed. She got a couple of rebounds early and put them biscuit in the basket to aid in the 11-0 run. Bliss and Emily Seifert also scored and Karlee Myers nailed a 3-pointer in the run.

Hurricane got on the board on a basket by Sela Filo and Brooklyn Gubler made it interesting for a moment with a 3-pointer after a Maddie Hall steal to pull the Tigers within 11-5. But that’s as close as it would get as the fifth senior, Kassidy Cox, would ignite an 8-2 run to close out the quarter and begin the rout.

Desert Hills beat Hurricane 83-50 earlier this season and the Thunder have won every region game by double-digits. The Lady Thunder are now 18-1 and have a 12-game winning streak. With all that success, motivation could be difficult.

“It can be, but we try to look at each game as if both teams are 0-0,” Bodnar said. “Sometimes we don’t play up to our potential, so we are always trying to play like we know we can.”

Bodnar finished with 13 points to lead all scorers. Beckstrand had 12 and Bliss added 10. Done and Myers had 9 each. For Hurricane, Gubler had 11 points and 9 rebounds while Filo had 9 points and 8 boards.

The Thunder have three games left and lead Snow Canyon (6-2) by two and a half games and Hurricane (6-3) by three games. Desert Hills plays at winless Pine View next Tuesday with an opportunity to clinch at least a tie for the region crown on that night. The Tigers, who are 11-7 overall, battle the Warriors that same night at Snow Canyon.

The Lady Warriors moved ahead of Hurricane into second place with the road win Thursday night.

It was 12-10 midway through the first half when Snow Canyon went on a 13-0 run to begin the blowout. Nikenna Durante started things with a driving layup and Ashlee Nyborg hit a 3-pointer in the run as the Warriors closed out the half with nine straight, then opened the third period with back to back scores for a 25-10 advantage. Led by the hot shooting of Nyborg and Madison Mooring, the lead ballooned to 41-19 by the end of the third quarter.

Mooring finished the night with 13 points and Nyborg had 12. Durante chipped in 11 as SC improved to 10-6 overall and 6-2 in region, a half-game ahead of Hurricane for second place. The Warriors host the Tigers Tuesday night with major playoff implications on the line.

Pine View is still searching for its first win and is 0-8 in region. The Lady Panthers got seven points from Kenya Schone and play at home vs. top-ranked Desert Hills Tuesday night.

It was a huge road win for the defending state champs as the Lady Flyers pulled within a half-game of a potential playoff spot and fourth-place.

Liz Empey had 10 points and 14 rebounds as Dixie started the game on a 9-2 run and outscored the Lady Reds 14-6 in the first quarter. Rebekah Miner opened the game with back to back jump shots for Dixie for a 4-0 lead. After a pair of free throws by Cedar’s McKenna Collins made it 4-2, Taylor Whitson hit a 3-pointer and Empey hit a pair of charity shots for a 9-2 edge.

The Flyers led by as many as 10 in the first three quarters, but Cedar made a run in the fourth quarter and closed to within five at 34-29 with 3:18 to play. But Hadli Gledhill made a pair of free throws, then followed that with a jumper in the lane to make it 38-29 and the Lady Reds never got closer than eight the rest of the way.

Cedar, 9-10 and 3-6, also hopes to make the playoffs and has also played top-ranked Desert Hills twice. The Lady Reds have a bye Tuesday, then are home for Snow Canyon Thursday. 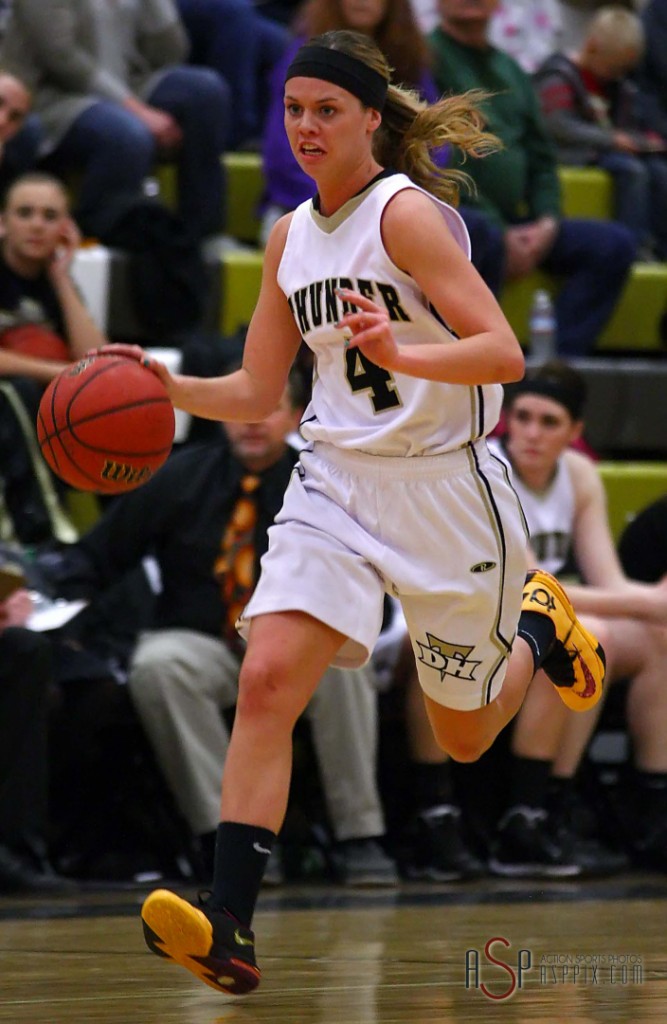 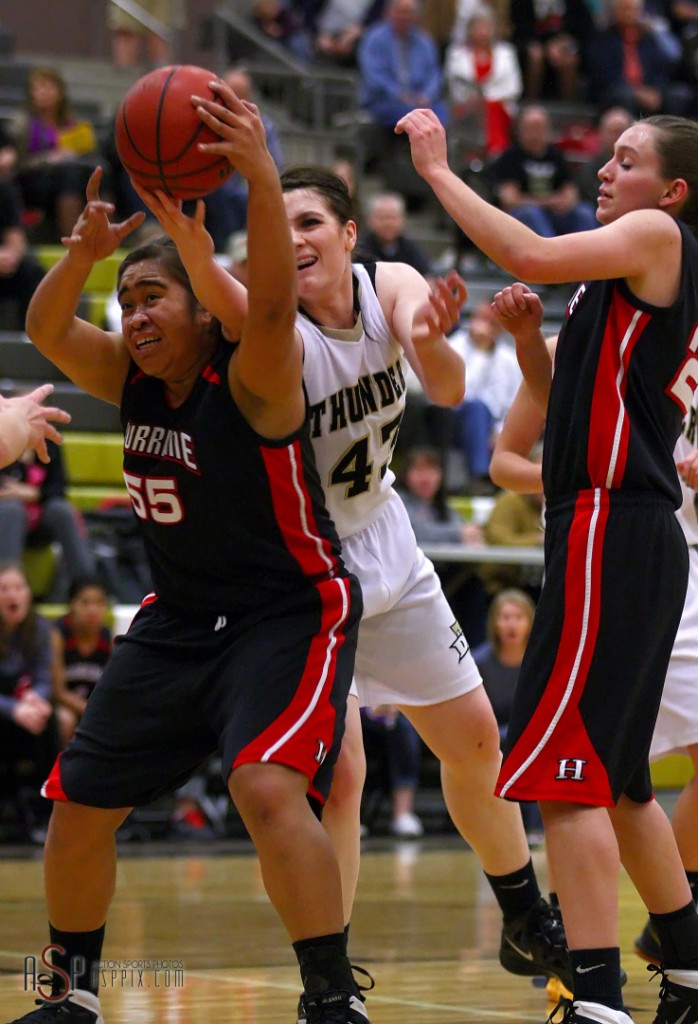 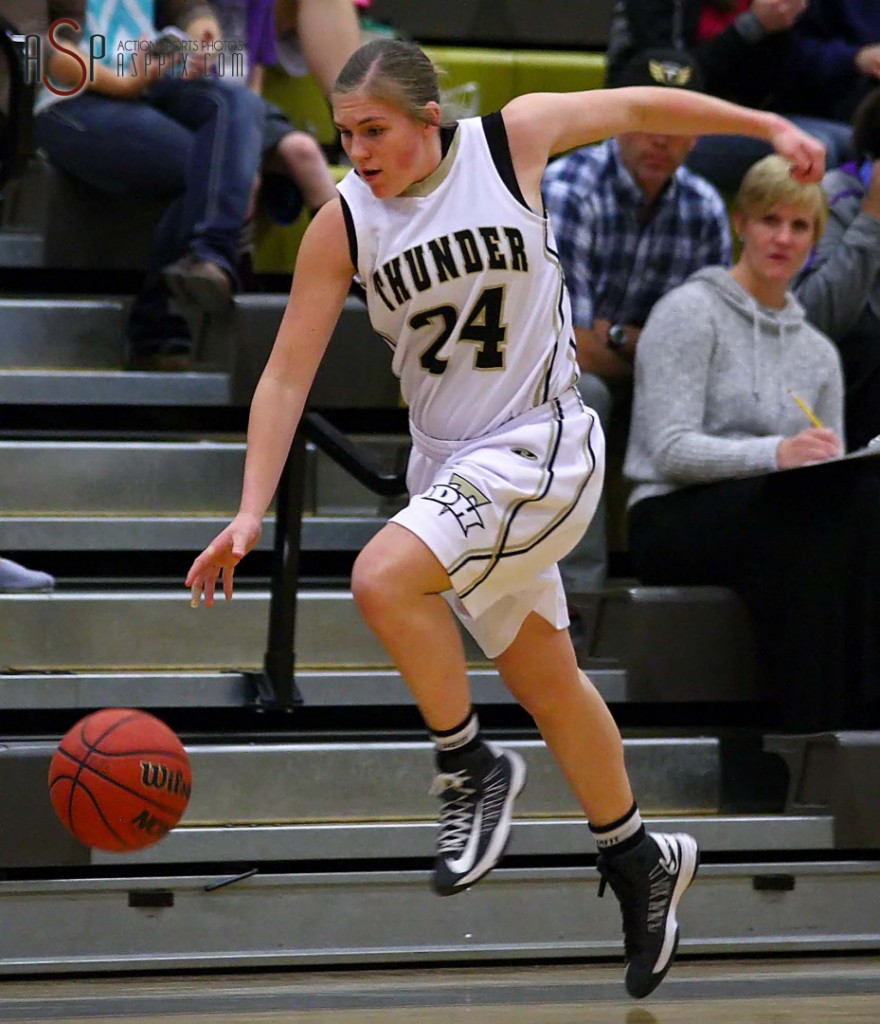 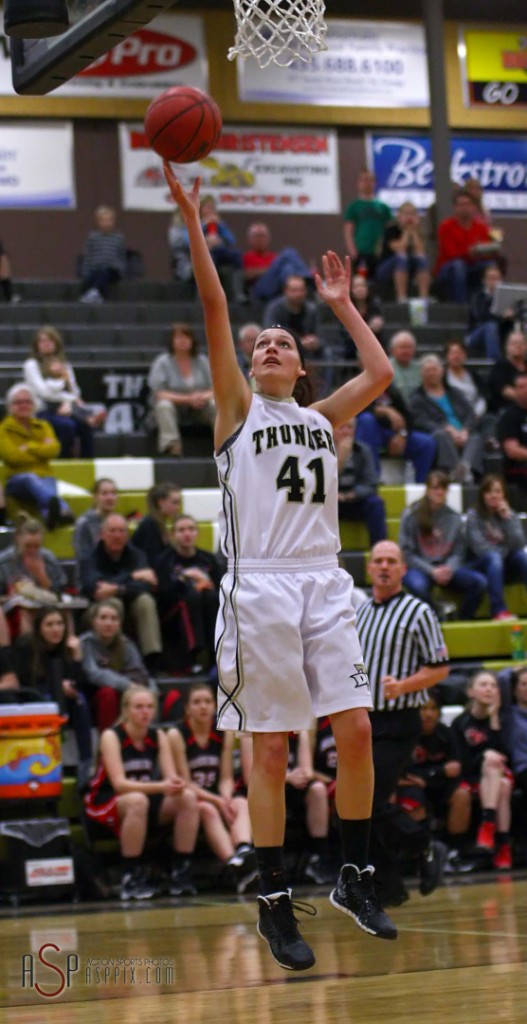 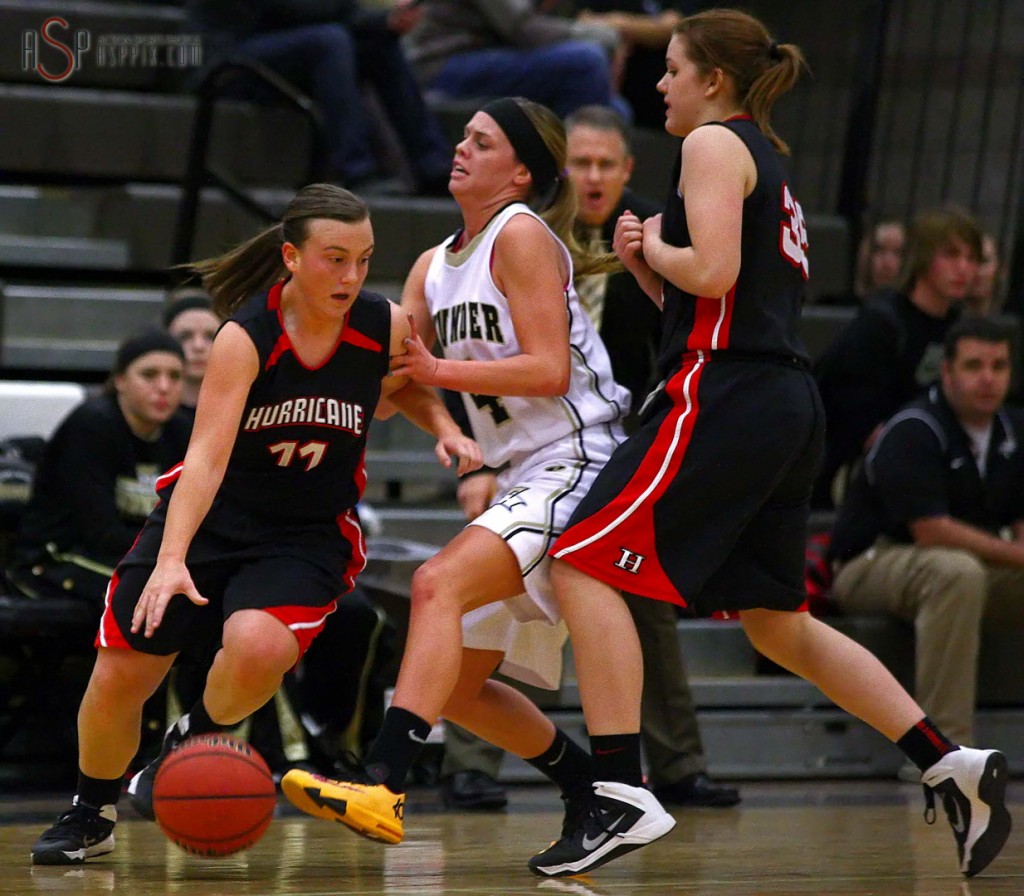 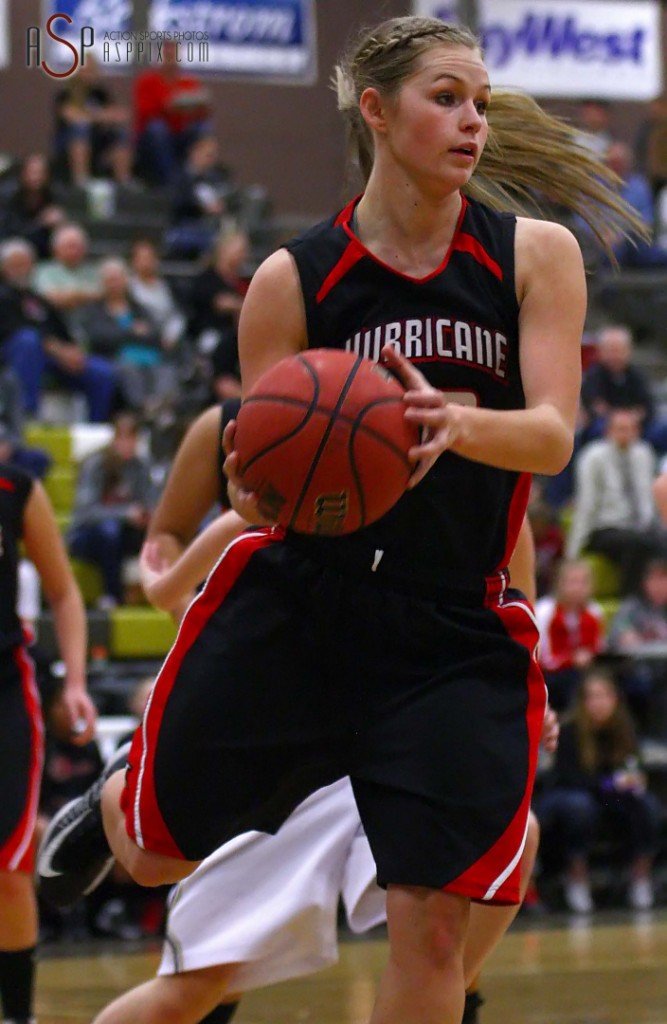 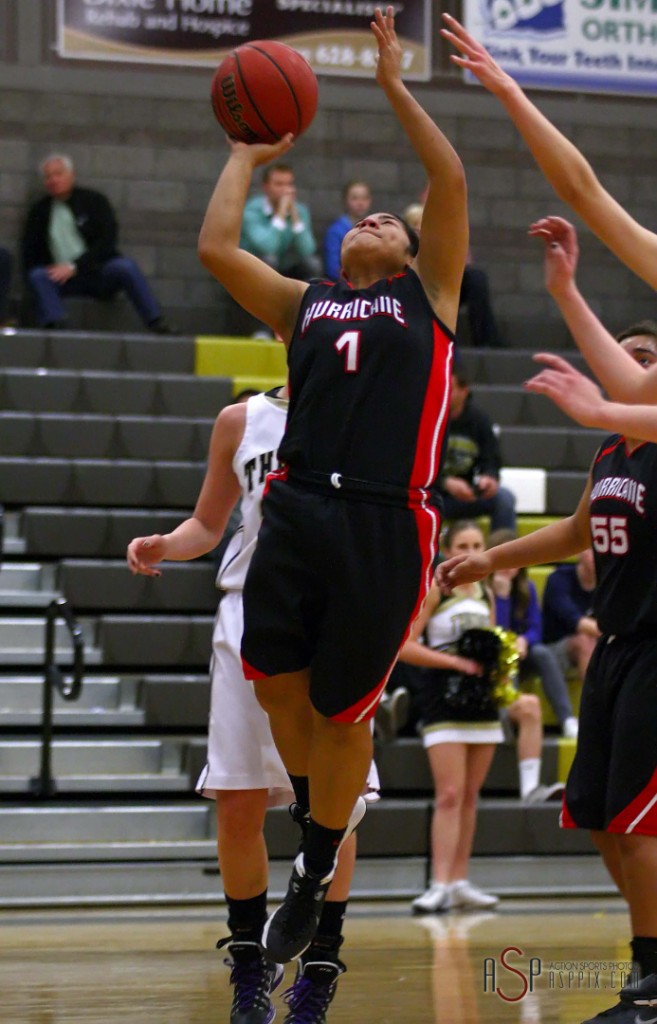 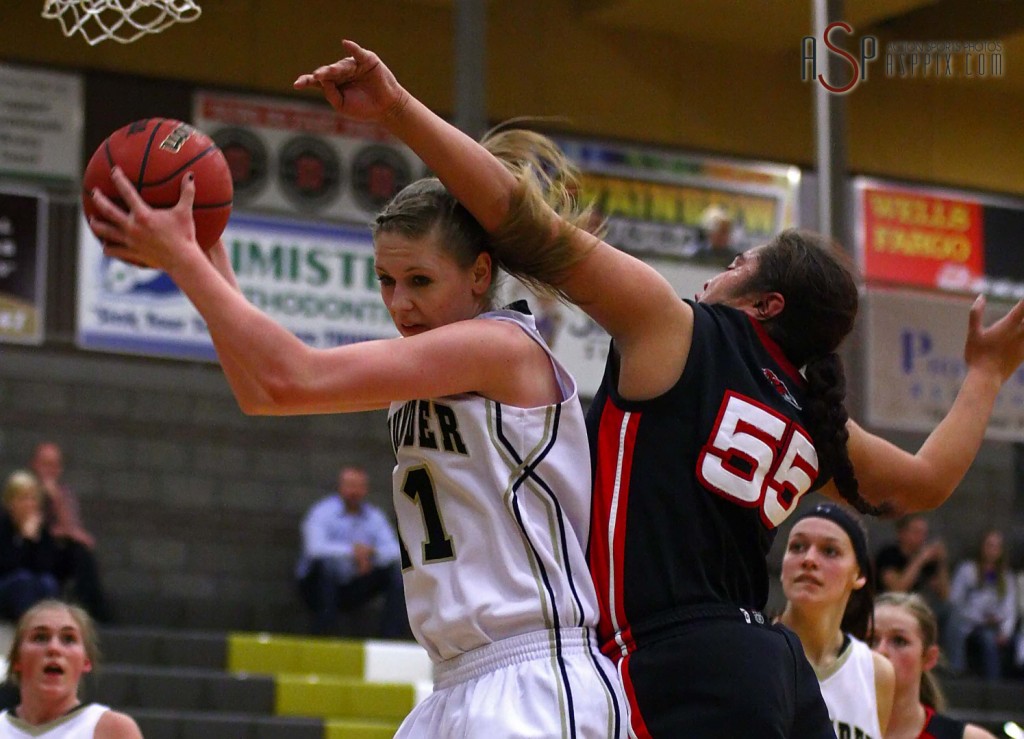 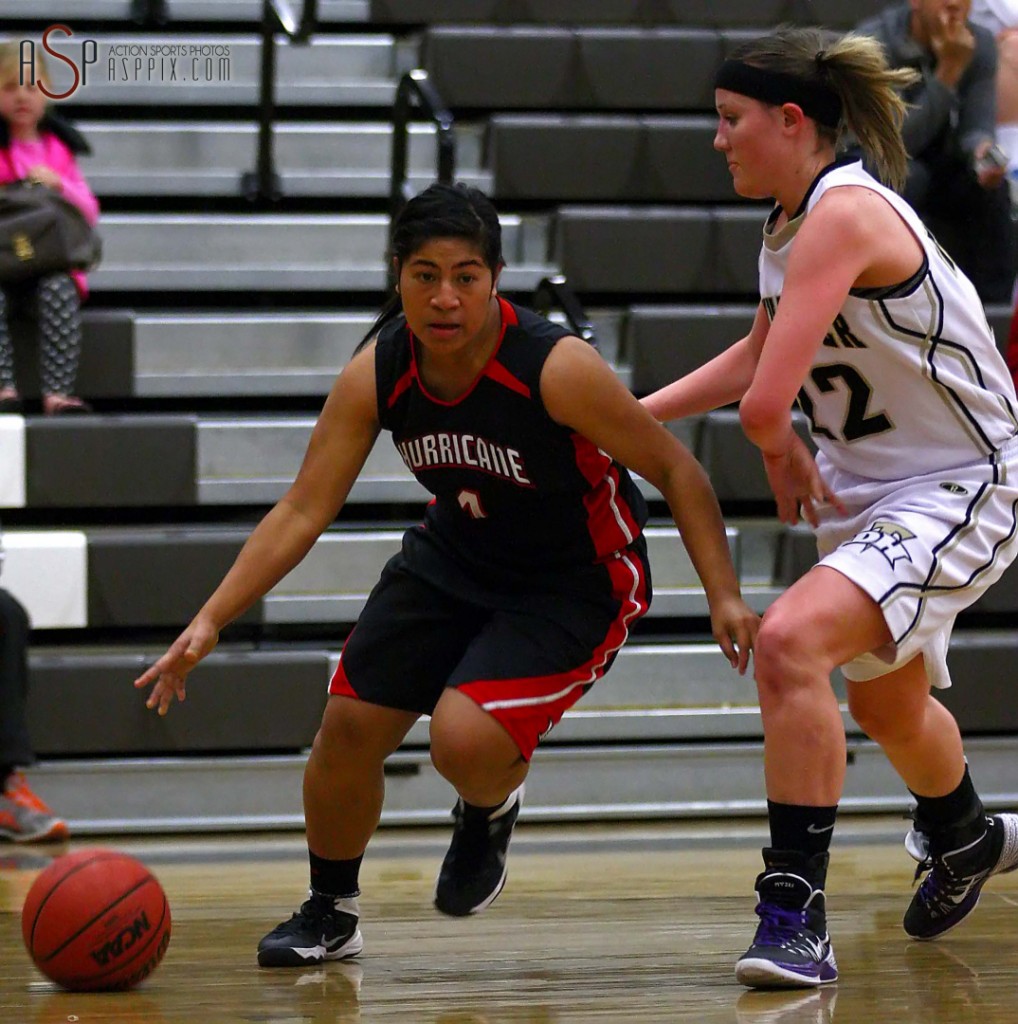