SAN DIEGO – Dixie State did everything right — except get the rebound. 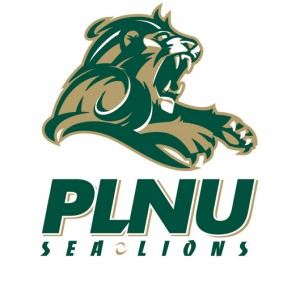 Dixie State had Point Loma Nazarene played perfectly on defense. The game was tied with 25 seconds left and the Red Storm knew the ball would end up in the hands of Point Loma’s Hayden Lescault, who had scored 21 points to lead the Sea Lions. The Red Storm’s leading shot blocker, Zach Robbins, had rotated on Lescault and deflected his 3-point shot attempt. It was perfect defense in stopping the game-winning shot. However, the blocked shot fell right into the hands of A.J. Ussery, who now had the ball in the paint, absent Robbins. The easy putback with 0.3 seconds left gave Point Loma the victory, 65-63, Saturday night in a celebratory Golden Gymnasium.

It was a classic second half with a couple of big runs and two teams making big plays after big plays.

Dixie State trailed 30-28 at the half and quickly fell down by five after a 3-pointer by Marek Klassen 36 seconds into the second half. That’s when Robbins would get it going, He had a a pair of inside baskets and DeQuan Thompson made a 3-pointer as part of a 12-2 Red Storm run as DSU took a 40-35 edge with 14:28 to play.

After an exchange of possessions, Dalton Groskreutz missed a try on a 3-pointer and DSU was forced to foul. Lescault made 1 of 2 free throws to put the lead at 62-58 with 1:03 to go. Dixie State immediately went to Robbins, who was fouled and made both free throws. That made it 62-60 with 54 seconds left.

DSU’s Louis Garrett fouled Ussery just seven seconds later and the strategy worked as the Point Loma senior made just one of his two attempts, leaving Dixie State the chance to tie, down just three with 47 seconds to go. The Storm worked the perimeter and found Thompson, who missed his trey attempt, but was fouled. The junior from Las Vegas, showing extreme composure, nailed all three free throws to tie the game with 25 seconds to play, setting up the fateful final events and Ussery’s heroics.

Statistically, the teams played to a draw with Dixie State taking an edge in rebounds, 41-33, and Point Loma committing two less turnovers. Both teams’ shooting were nearly identical with both teams struggling against the other team’s defense. It was a game where literally the last team with the ball was likely to pull out the victory. Unfortunately for the Red Storm, PLNU got the ball with 25 seconds left and the shot clock turned off.

In their earlier match-up, back in mid-December, the Sea Lions led by as many as 17 points, only to see DSU claw back and pull out the victory. This game would see neither team lead by more than six points. There were 12 ties and 11 lead changes.

Robbins led the Red Storm, hitting 12 of 18 shots, and recording his sixth straight double-double with 26 points and 11 rebounds. The rest of the team combined could only manage 12 of 42 shots for an atypically low 29 percent shooting from the floor. Thompson joined Robbins in double-figures scoring with 12 points. Jordan Rex had four points and 11 rebounds. Kimball Payne finished with nine points and nine assists, but had an uncharacteristic six turnovers.

Lescault was joined by Klassen and Judd Welfringer in double-figures with 12 and 11 points, respectively.

The victory brings PLNU even in conference play at 6-6 with an overall record of 11-7. Dixie State drops to 14-3, 8-3 in the Pac West. The Red Storm will return home where they will play their next six games at Burns Arena beginning this Thursday against Academy of Art University at 7:30 p.m.