HILO, Haw. – DeQuan Thompson saved the Red Storm from an upset with a 3-point shot from the corner with just seconds remaining, evening the score and sending the game into overtime, where Dixie State pulled ahead and beat Hawaii-Hilo 79-74 Thursday night.

“Kimball (Payne) sliced down the middle of the lane,” said Thompson. “He had a wide-open layup. My guy had rotated over on Zach (Robbins) and Kimball saw me all alone in the right corner. I knew it was in when it left my hands.”

UHH still had 28 seconds and a chance to win it. Vulcans coach G.E. Coleman elected not to call a timeout and Joey Rodriguez’s 15-foot jumper caught nothing but air at the buzzer.

Thompson then iced the game with 11 seconds in overtime, hitting both free throws to put the game out of reach for the Storm. To that point, Thompson had missed four out of eight free throws.

“I was confident going to the line,” said Thompson. “Sometimes you have one of those nights. Several of my misses hit all around the rim before dropping out.”

Dixie was plagued with foul trouble the first half with several players getting two fouls. UHH was also able to neutralize Dixie’s size advantage with good positioning, matching the Red Storm rebounds in the first half.

UHH would build on that lead coming out of halftime going on an 11-6 run and the Red Storm faced its biggest deficit, 50-42 with 15:08 left in the game. Over the next several minutes the pace of the game quickened, but was marred by several foul calls. While Dixie was able to keep its players out of foul trouble, several Vulcan players had to go to the bench earlier than expected. Dixie was unable to capitalize, shooting a paltry 56-percent from the stripe, hitting 20 of 36, with several misses coming at the front end of one and ones. Dixie also had a below par shooting night from the floor, hitting 31-percent from the arc and 46-percent from the field, both far below their season average.

The Red Storm was able to claw back and reclaim the lead on a jumper from Groskreutz, 53-52. The teams stayed close over the next six minutes trading the lead four times. But when UHH’s Joey Rodriguez hit a three-pointer at the 4:11 mark, Dixie was looking at a five-point deficit, 63-58.

With 1:37 left to play, Groskreutz went to the line with a chance to tie the game. After hitting the first free throw, the Red Storm committed a lane violation and trailed 64-63. Robbins’ jumper pulled the Red Storm to within one again at the 1:16 mark. Two free throws by Vulcan guard Derek Owens put UHH up three setting up Payne’s pass to Thompson.

Dixie scored the first five points in overtime behind buckets by Robbins and Groskreutz. Whenever the Vulcans would trim the lead to three, the Red Storm would respond.

For the Vulcans, Rodriguez led with 16 points off the bench. Darnell Williams and Brandon Thomas added 15 apiece. Owens chipped in 11. 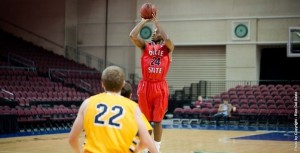