The view of the completed diamond diverging interchange at I-15 Exit 8 from the Brick Oven, St. George, Utah, Nov. 19, 2013 | Photo by Mori Kessler, St. George News

ST. GEORGE – Driving through the St. George Boulevard-Exit 8 Interchange looked a bit different Tuesday morning as the interchange – closed over the weekend – made the switch from a traditional diamond interchange to a diverging diamond interchange. The DDI, as state transportation officials like to call it, is designed to promote smooth transitions onto and off the interstate and relieve traffic congestion.

“This has been one of the most congested areas of the city,” St. George Mayor Dan McArthur said.

Finished a week ahead of schedule, officials from the City of St. George and Utah Department of Transportation are pleased with the results and believe the new interchange will benefit the area.

The new St. George Boulevard-Exit 8 Interchange is the first DDI in Southern Utah and the fifth in the state. It was also a relatively “painless project” due to how smoothly everything came together, Kevin Kitchen, a UDOT representative said.

“This is really a great example of how an alternative process can work,” Kitchen said.

The “alternative process” Kitchen referred to is the design-build route UDOT chose to take with the $16 million project.

A design-build process allows a bidding contractor to propose its own designs for a project. According to UDOT, this process helps cut down on project delivery time and the overall costs, as one company is handling the majority of the work involved.

Kim Manwill, UDOT’s project manager overseeing the interchange’s reconfiguration, said the majority of the project not only finished ahead of schedule, but that it also allowed UDOT to “tap into the innovation” of the private sector.

The design-build team chosen by UDOT was Wadsworth Brothers Construction and Wilson & Company.

A prime focus of the project was a plan to keep traffic flow through the interchange as smooth as possible as the configuration took place.

Manwill said this was accomplished by having the bulk of the work and closures done at night. Construction was also done in stages. The staging only closed off parts of the interchange at a time instead of the whole, allowing traffic to continue through unfettered.

Initially there were concerns from area business owners that the interchange construction may negatively impact them, but that didn’t happen, Sandi Lampshire, the project’s public involvement coordinator said.

To help area businesses stay in the loop in regards to the project, UDOT sent out weekly emails on the project’s status and established a hotline and an email for any questions business owners might have had. They also met face-to-face as needed.

A great deal of communication and coordination has been done between UDOT and the City of St. George concerning St. George Boulevard-Exit 8’s reconfiguration. This is nothing new for the two entities, as relationships have been built through past projects like the Dixie Drive Interchange.

Some suggestions made by city officials on what they wanted to see included in the new interchange were taken by UDOT and made a part of the overall project requirements, like a pedestrian walkway. Until the construction of the DDI at Exit 8, a person couldn’t safely cross on foot from St. George Boulevard to River Road. That has changed. Now pedestrians can safely traverse the interchange.

“It was critical to get a pedestrian crossing,” McArthur said. “I have been appreciative with how receptive UDOT has been.”

The City of St. George also provided funding to the project for improvements to 1000 East, where UDOT has added a double-left turning lane to help with traffic flow. Other funding has been provided by the city for aesthetics and landscaping.

“Our relationship with UDOT is tremendous,” McArthur said, and added that having that relationship helped make other projects move forward.

The next big project UDOT and St. George will engage in will be the Red Hills Parkway interchange, Kitchen said.

What’s done, what’s left to be done, and a plea for patience

With the primary portion of the new interchange complete, Kitchen said some work will continue until Dec. 19.

Striping on the roads, overhead lighting and crossing lights are some of the items yet to be completed. Until then, anyone who walks through the new interchange will be going through a construction zone, Kitchen said.

In addition to the new pedestrian walkway and double-left turn on 1000 East, the exiting bridge on which the DDI is built was expanded. New drainage infrastructure has been added as well, as have new signals, lighting, and camera systems.

Since the configuration of the interchange has changes, drivers are advised to be patient and allow themselves to get used to the new way the intersection works.

“It takes a minimum of two weeks for people to adjust,” Kitchen said. 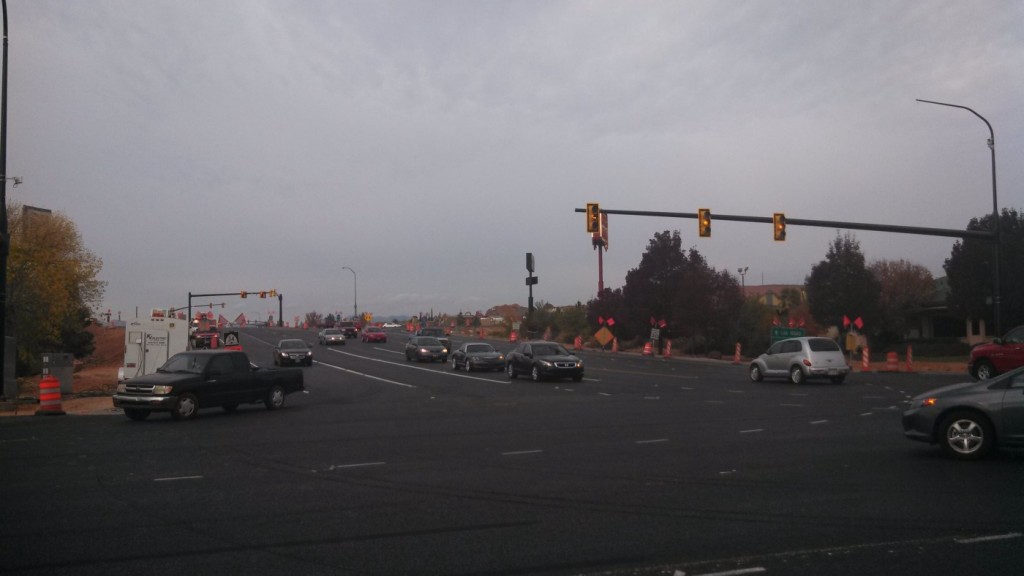 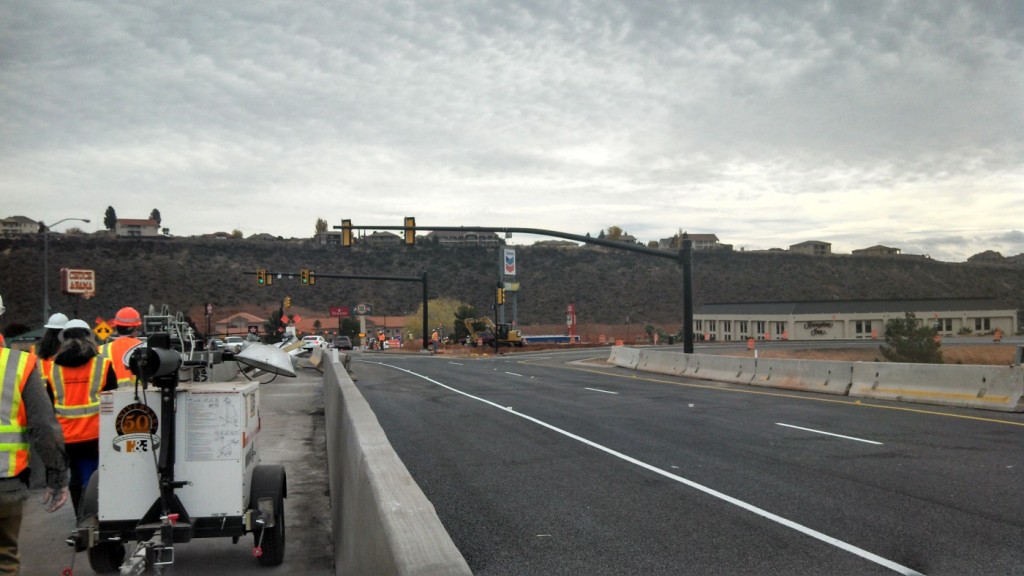 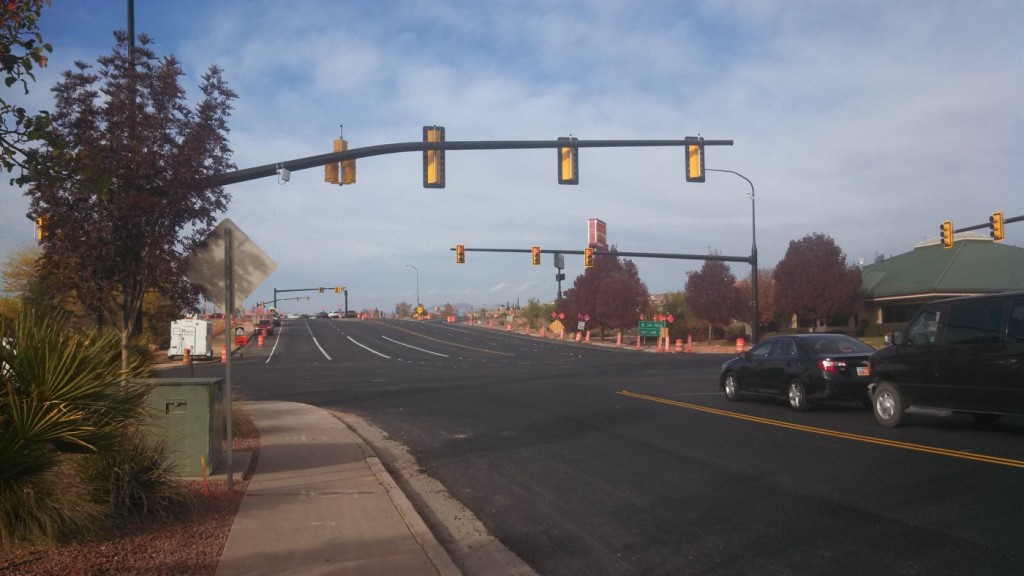 The view of the completed diamond diverging interchange at I-15 Exit 8 from the Brick Oven, St. George, Utah, Nov. 19, 2013 | Photo by Mori Kessler, St. George News 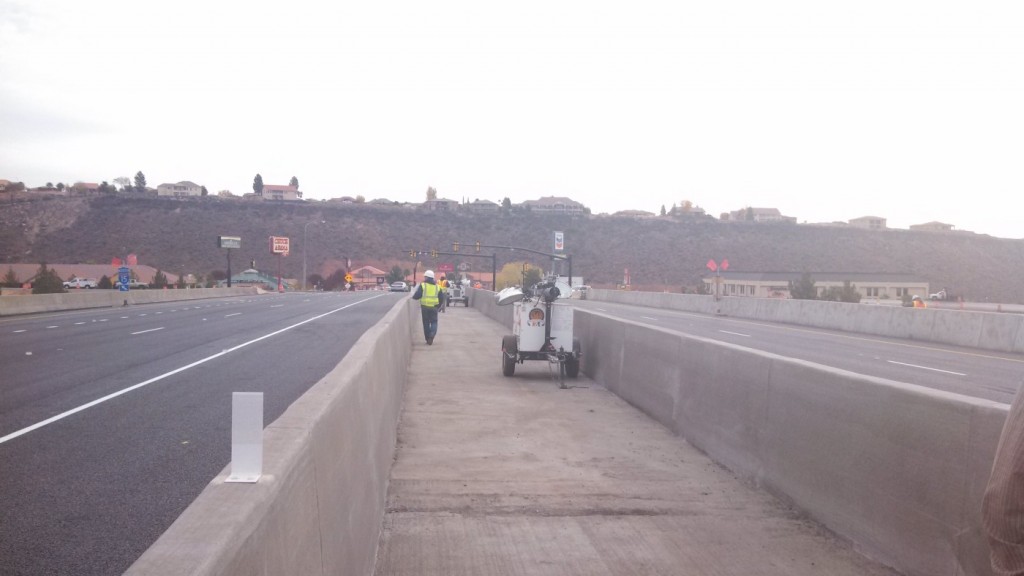 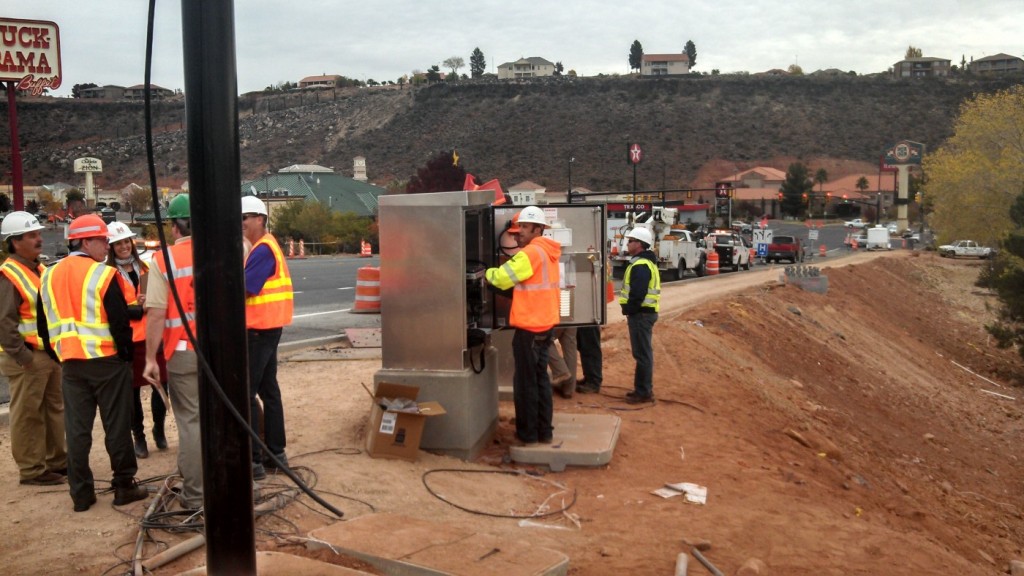 Though the reconfigured interchange is open to traffic, some work remains to be done, St. George, Utah, Nov. 19, 2013 | Photo by Mori Kessler, St. George News 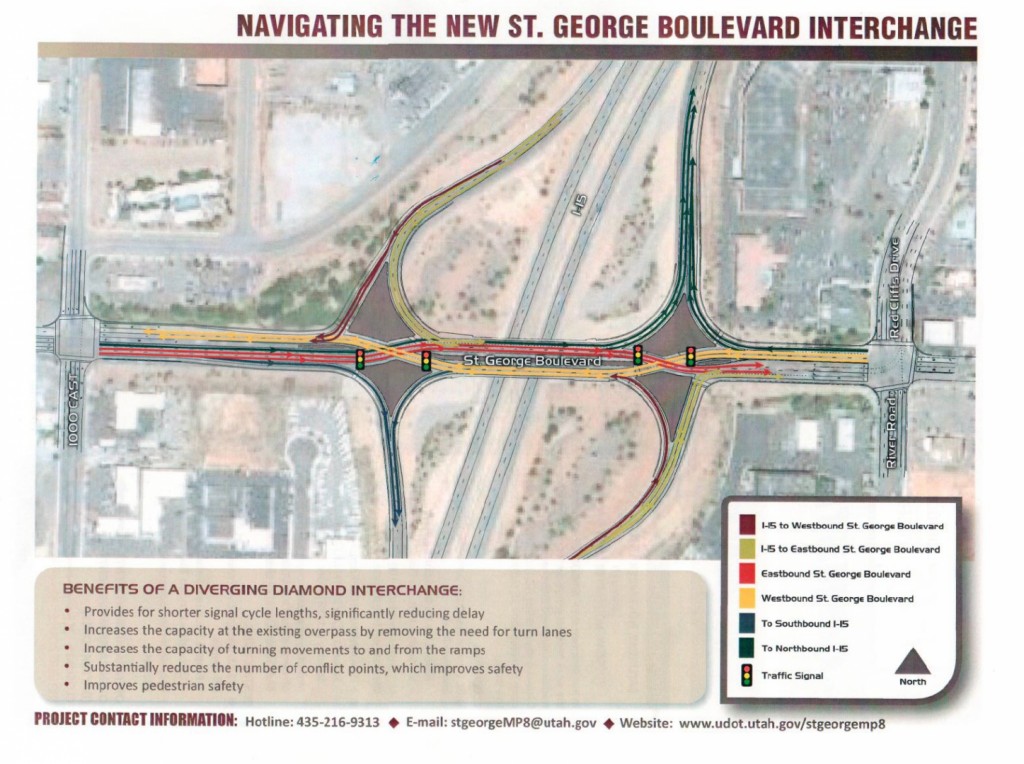 Graphic of the completed interchange courtesy of the Utah Department of Transportation, St. George News