Editor’s Note: This story contains content that is graphic in nature. It may not be suitable for sensitive viewers, reader discretion is advised.

ST. GEORGE  − Ammon McNeely recently survived a near-deadly BASE jumping accident near Moab and was released from the hospital Thursday. Seven surgeries later, McNeely talks about his hair-raising hospital experience that included a second close call with losing his leg. He is now wiggling his toes and optimistically discussing “the prospect of a new life with a different foot,” in an interview with St. George News from his home.

Just a few weeks ago, after careening down a 350-foot cliff, McNeely found himself stranded in the desert on an intermediate cliff ledge, with one leg broken straight in half, and death looming from blood loss. After an incredible rescue, he found himself in the hospital, still fully believing that he would never feel the sensation of wiggling his toes again. McNeely was mentally preparing himself for a leg amputation.

On the day of his Oct. 25 accident, McNeely was transported by Classic Lifeguard helicopter to St. Mary’s hospital in Grand Junction, Colo. In the emergency room, surgeons immediately went to work attaching two completely severed calf bones, his fibula and tibia. First, they reattached his fibula by drilling metal plates and screws into it. To combat excessive swelling in McNeely’s leg, surgeons also had to cut open lengthy incisions in his connective tissue that surrounded his leg muscles — a procedure called a fasciotomy.

During this first surgery, and through most of the successive surgeries, doctors constantly used a surgical vacuum to suck out fluids and keep the open wounds clean. McNeely’s second broken calf bone — his tibia — wasn’t repaired for another week because doctors had to perform two successive cleaning surgeries in a four-day period after his fibula surgery.

During cleaning surgeries, to remove fluids and tissues from his open wounds and incisions, one of his arteries gathered a big blood clot. Doctors feared he might lose too much tissue to salvage his leg but blood thinner miraculously cleared the clot and his system barely got blood flowing through his leg before he came near to losing it a second time.

Once McNeely’s blood was flowing again, surgeons had to move fast to remove more bundles of dead tissue from his wounds.

Ten days after arriving at the hospital, McNeely’s tibia — his other severed calf bone — was finally repaired. With his wounds and incisions still left open 13 days after his first surgery, doctors performed another wound-cleaning surgery with the vacuum.

Right before his final surgery – and to his distress he said – McNeely found out that surgeons needed to remove up to 5 inches of muscle from either his abdomen or his thigh to replace muscle lost in his calf. This would substantially decrease the strength and mobility from whichever muscle they took it from. After such a miraculous recovery so far, McNeely said he was devastated to find out that he would be losing muscles from other parts of his body.

Remarkably, once the surgery started, surgeons found enough muscle left that they downgraded the surgery to a skin graft surgery, and ended up leaving his other muscles intact. McNeely still had skin grafted off of his thigh, which he said was the most excruciating pain he felt the entire time in the hospital. He was in intense pain for about 18 hours after this final surgery, he said. No amount of  medication removed the pain. However, he said he was overjoyed that this procedure was much simper than first anticipated.

Over all, doctors told McNeely it is a miracle that they even saved his leg at all, he said. It’s an even greater miracle that there wasn’t more damage done throughout the surgery process, McNeely said. The surgeries went better than anyone expected.

Stranded in a hospital bed

Being confined to a hospital bed for three weeks sounds like a bleak task for an extreme athlete like McNeely. But he has been in good spirits, drawing strength from many things, particularly that this could have been much worse.

“I thought for sure … on that ledge … that I was going to be an amputee,” McNeely said. “I just constantly count my blessings … I just feel so fortunate and lucky.”

McNeely has received tons of support and love, he said: “People are constantly wishing me well, and that also really helps a lot.”

More than an extreme adventurer

McNeely’s close friend and business partner, Jeff Vargen, has seen McNeely through several of his past injuries. McNeely never complains and somehow manages to keep an optimistic attitude even when going through traumatic injuries, Vargen said.

“There have been several times that things went horribly wrong in climbs or jumps,” Vargen said, “each time (McNeely) has told me about them, he describes the event but never places blame or makes an excuse.”

McNeely doesn’t only adventure; in fact, he said he has many other passions he will be pursuing during this down time. Vargen, who worked with McNeely on a climbing documentary called “Assault on El Capitan,” completely disagreed with what he called a misconception about McNeely: that is, that he is obsessed with adventure. Not so, Vargen said.  A large part of their friendship has been spent not adventuring, he said, but doing many other things they both enjoy.

The most meaningful of McNeely’s other passions are painting and writing. “Ammon is an amazing painter and gifted writer,” Vargen said. Both of these activities have been filling much of McNeely’s down time since his accident.

Besides his love for watercolors and writing, McNeely also plays drums and guitar. “These … really lift my spirits,” he said.

“For me,” McNeely said, “outdoor adventure is the No. 1 thing that I am passionate about, but I do have many other aspects of my life, like music and art, that … I couldn’t live without.”

An ethical dilemma over charity

While McNeely’s been in the hospital, he has been watching helplessly as a fundraiser for him has been gaining speed. The fundraising webpage “Help Ammon” reports that all donations will go directly to getting McNeely a new setup for BASE jumping since his is current setup is worn out. The fund currently has $2,105.94 in it as of Nov. 19.

McNeely had nothing to do with starting the fundraiser and said that he has had an ethical dilemma about the fund since its inception.

“I was taught as a kid that if you want something out of your life,” he said, “you’ve got to go out and earn it yourself, people can’t just hand you stuff.”

Despite his conflicting feelings, he does appreciate the people who started the fundraiser: “I really really do appreciate it, but I just didn’t ask for it.” The last thing he is worried about right now, he said, is having new BASE jumping gear.

When the time comes for it, McNeely said he isn’t worried about finding a way to make money to update his gear. He has already made money off the video he posted, and he’s in discussions with the hospital to help them with a video ad campaign that could substantially lower his hospital bills.

Now released from the hospital and recuperating at home with friends and family around him, McNeely expects to get the majority of function back in his foot and hopes to be off crutches and walking in the next six to eight weeks.

“I can sleep most the night, plus I’ve got freedom to do what I want again,” he said; he’s been moving about the house, gone to the movies, and he often gets sun in his backyard.

Although he doesn’t expect to perform at the same levels that he once did, he said he will certainly BASE jump and climb again. He said:

A big part of what drives me anyway is the unknown, finding that out … is going to be part of the fun when I get back at it. 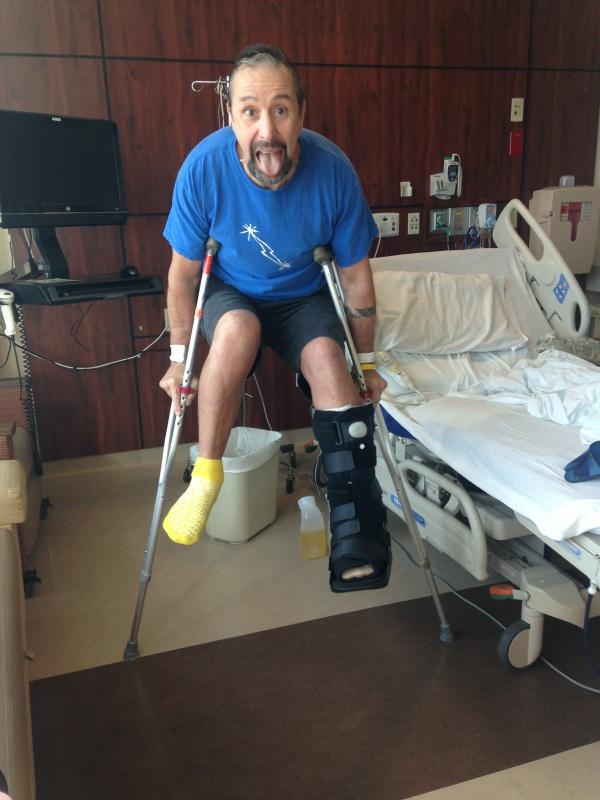 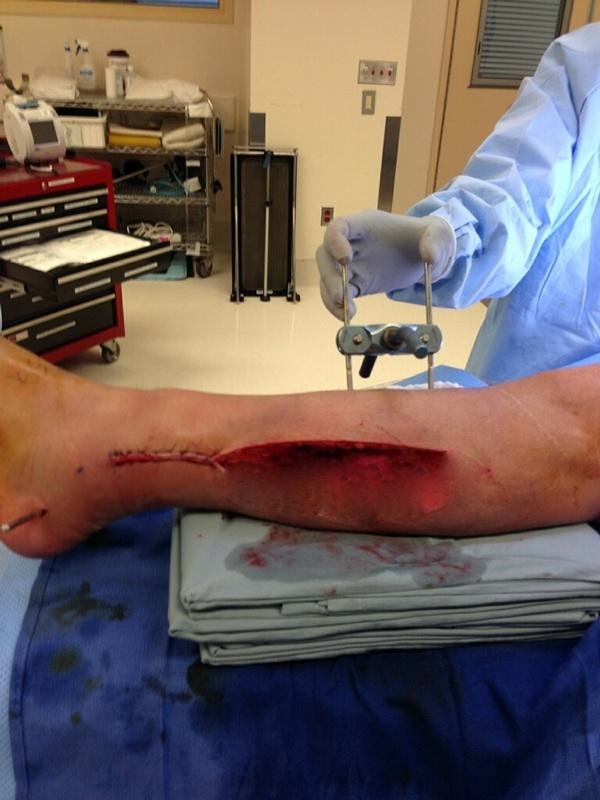 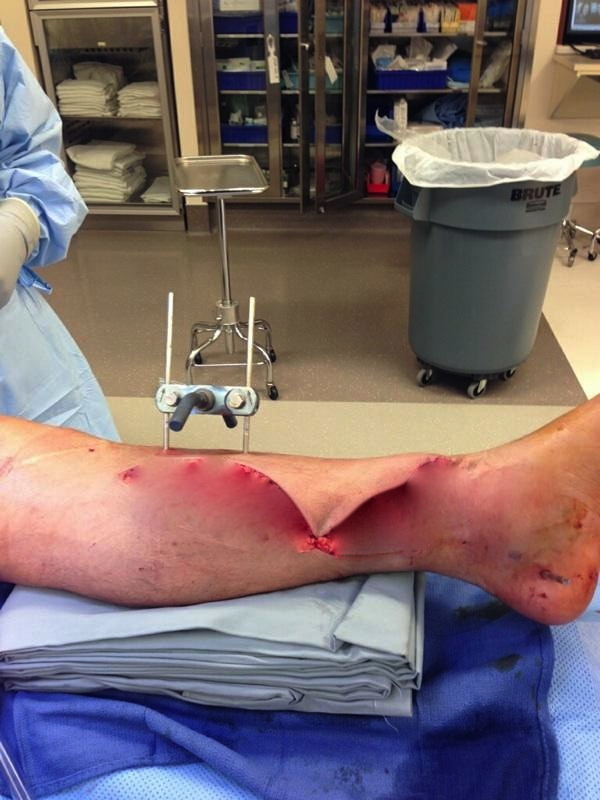 Doctors work to save Ammon McNeely’s leg after it was nearly severed in a BASE jumping accident near Moab, Utah on Oct. 25. St. Mary's Hospital, Grand Junction, Colo., Oct. 30, 2013 | Photo courtesy of Ammon McNeely, exposed wound blurred by St. George News out of deference to sensitive viewers 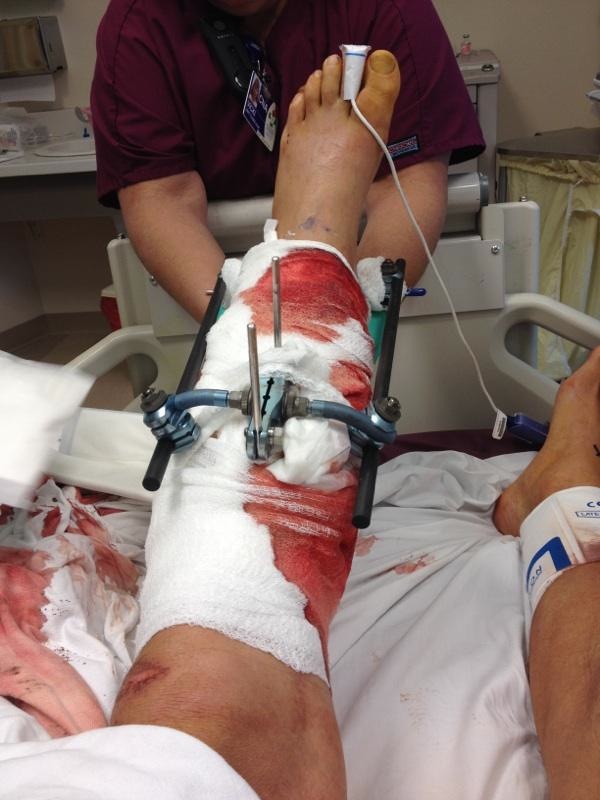 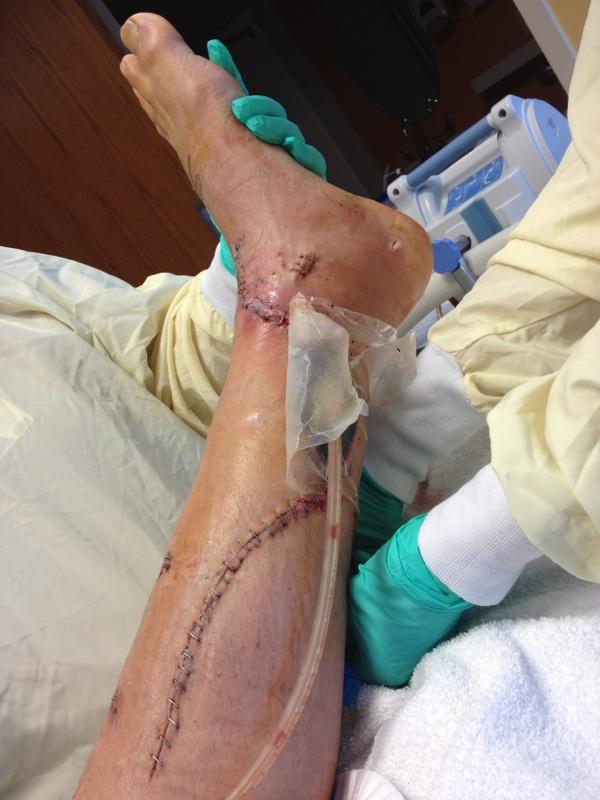 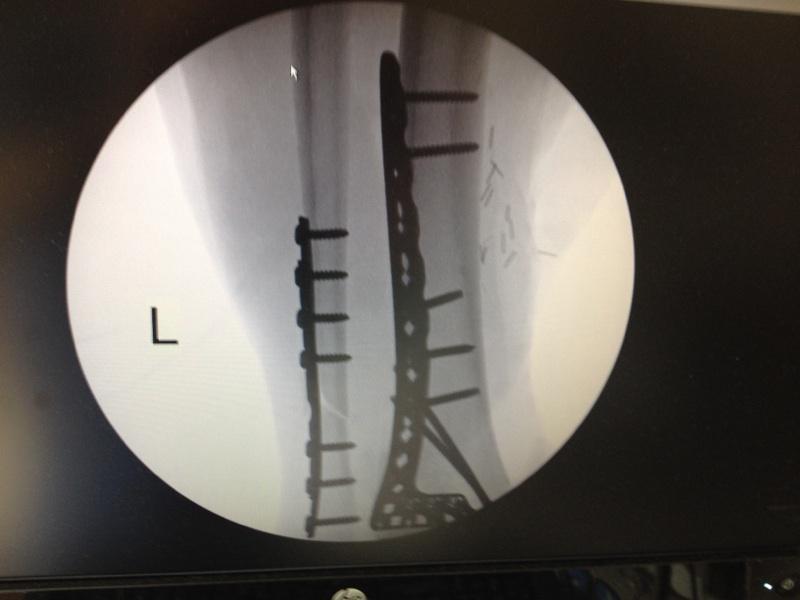 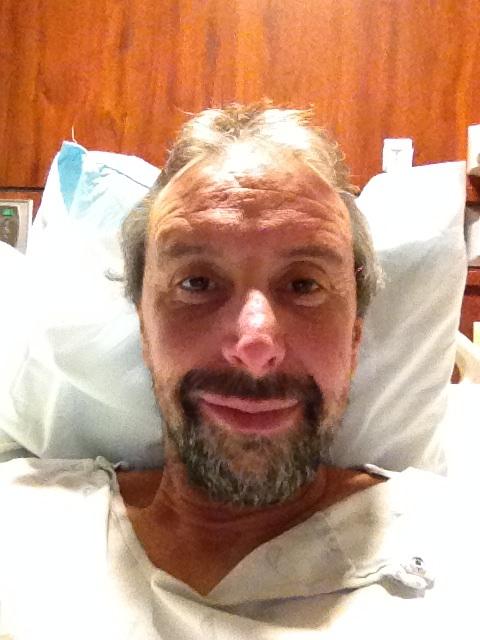 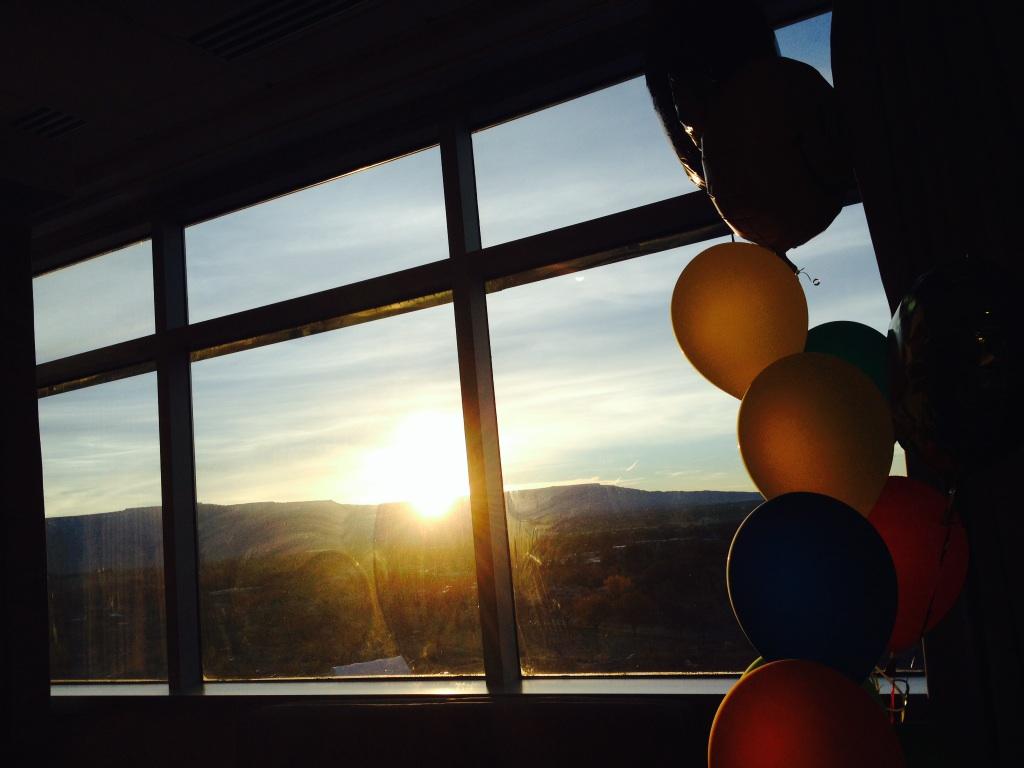