Facing a fourth and seven at the Dixie 4-yard line with just over a minute left in the game and DSU nursing a 28-19 lead, Red Storm punter Metz stood near the back of the end zone waiting for the snap. He had mishandled two earlier snaps, the first of which led to a Humboldt State score, and the second of which gave the Lumberjacks a first down at the Dixie 5-yard line just six plays earlier. A mishandled snap here would give HSU either a touchdown or a safety with an opportunity to get the ball back. Metz did not fail this time though, as he got the punt off under extreme pressure. The Dixie defense did the rest and the Red Storm came away with a 28-19 win over the Lumberjacks Saturday night at Hansen Stadium.

Dixie quarterback Griff Robles amassed 223 yards and three touchdowns on the ground and 267 yards passing and the final touchdown through the air in the victory, DSU’s second over the Lumberjacks this season.

Dixie State would score a touchdown in each quarter. The first two were runs by Robles. The first-quarter run was a designed quarterback draw for 2 yards. That score was matched by Lumberjack quarterback Kyle Morris from nine yards out. HSU would go up 10-7 on a 49-yard field goal by Matt Bruder. Dixie’s second quarter score came off a scramble from Robles after he was flushed from the pocket at the 2:32 mark. That score put the Red Storm up 14-10 going into halftime.

In the third quarter HSU would strike first. A mishandled snap on a punt formation gave the Lumberjacks good field position at the Dixie 34. Five plays later, HSU running back Kash Johnson scored on a 2-yard run. The extra point snap was fumbled, but Humboldt State held a 16-14 lead.

The ‘Jacks would be knocking on the door again after a Dixie three-and-out. Starting at their 30-yard line, Morris drove the Lumberjacks to the Dixie 4-yard line. After lining up for a field goal, Humboldt State faked the kick, but holder Chris Campbell’s pass was deflected at the line and Dixie took over on downs.

It would take Robles only five plays and 2:11 to drive 96 yards for his only touchdown pass of the night, to wide receiver Mitch Frei. That score was set up by a 62-yard pass play to tight end Joe Don Duncan on a third-and-two.

“That play was designed for short yardage, but I bounced off the defender and was able to get some good yardage,” said Duncan. “I had fumbled earlier in the game, so honestly I was not thinking touchdown, I was thinking ‘don’t fumble the ball.’”

On HSU’s first possession of the fourth quarter, Morris drove the Lumberjacks 58 yards on 10 plays, but had to settle for another Bruder field goal from 39 yards. That brought the Lumberjacks to within two, 21-19.

“We had made some situational adjustments before the game,” said Dixie linebacker Jake Duncan. “But at halftime, our coaches decided to go back to our base defense and we were able to limit them to nine points in the second half.”

Holding on to that slim two-point advantage halfway through the fourth quarter, Dixie State faced a third-and-one at midfield. Robles ran the read option, faking to running back Joel Davis, then cutting left  and racing 50 yards to the end zone. With Dillon Bishoff’s extra point, DSU had what would turn out to be a less-than-comfortable nine point edge.

After an HSU three-and-out, the Storm would take over at their own 18. They were forced into a punting situation after three plays and Metz had his second mishandled snap, giving Humboldt State possession at the Dixie State 5-yard line. On the ‘Jacks first play, Morris ran left and was met by imposing 6-3, 315-pound, DSU defensive tackle Saula Taufa. The big guy forced Morris to fumble and Dixie took over at its 1-yard line.

“Our defense played incredibly well,” said Brumfeld. “We kept putting them in terrible situations all night, and they stepped up. Twice Humboldt had them pushed up against our end zone and twice they came away with no points.”

In addition to Robles’ phenomenal numbers, Davis had a good day with 64 yards on 12 rushes. TE Joe Don Duncan had four receptions for 121 yards. Frei finished with 56 yards and a touchdown on four receptions. Wide receiver Randon Willard added 72 yards on three receptions.

Defensively, Dixie State was led by Jake Duncan, who had eight tackles. Defensive back DeShawn Perkins finished with seven tackles and an interception.

DSU out-gained Humboldt 550-431, including nearly 300 rushing yards for the Red Storm. Dixie State averaged 7.1 yards per play in the game.

The win moves Dixie State to 3-5 overall and 3-4 in the GNAC. The Red Storm will face Simon Fraser next week in Burnaby, British Columbia. Dixie defeated SFU earlier this year 39-12.

The loss keeps Humboldt State looking for its first win with a record at 0-8 (0-7 in the GNAC). The Lumberjacks will travel to Ellensburg, Wash., to face conference leader Central Washington next week. 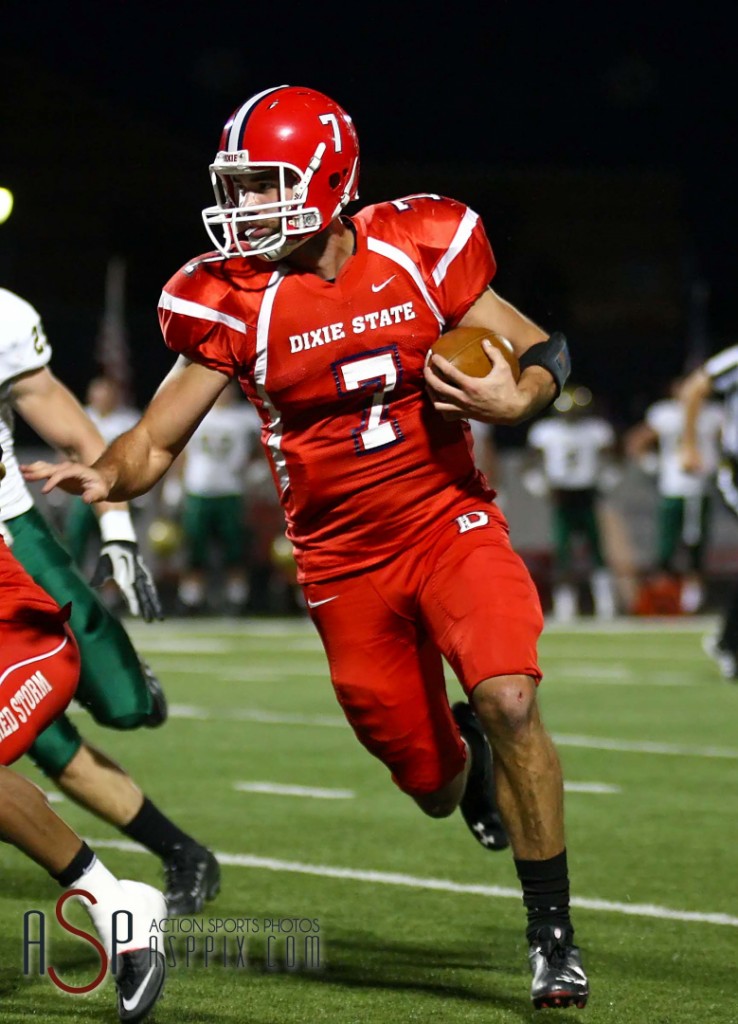 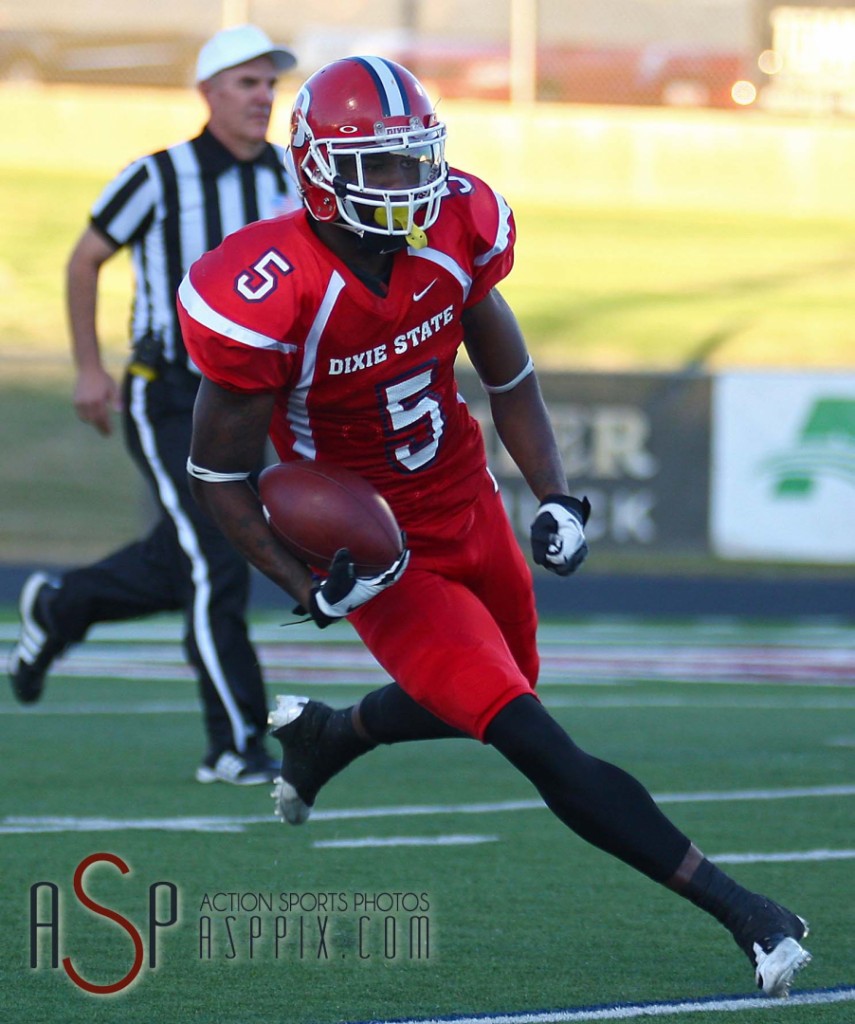 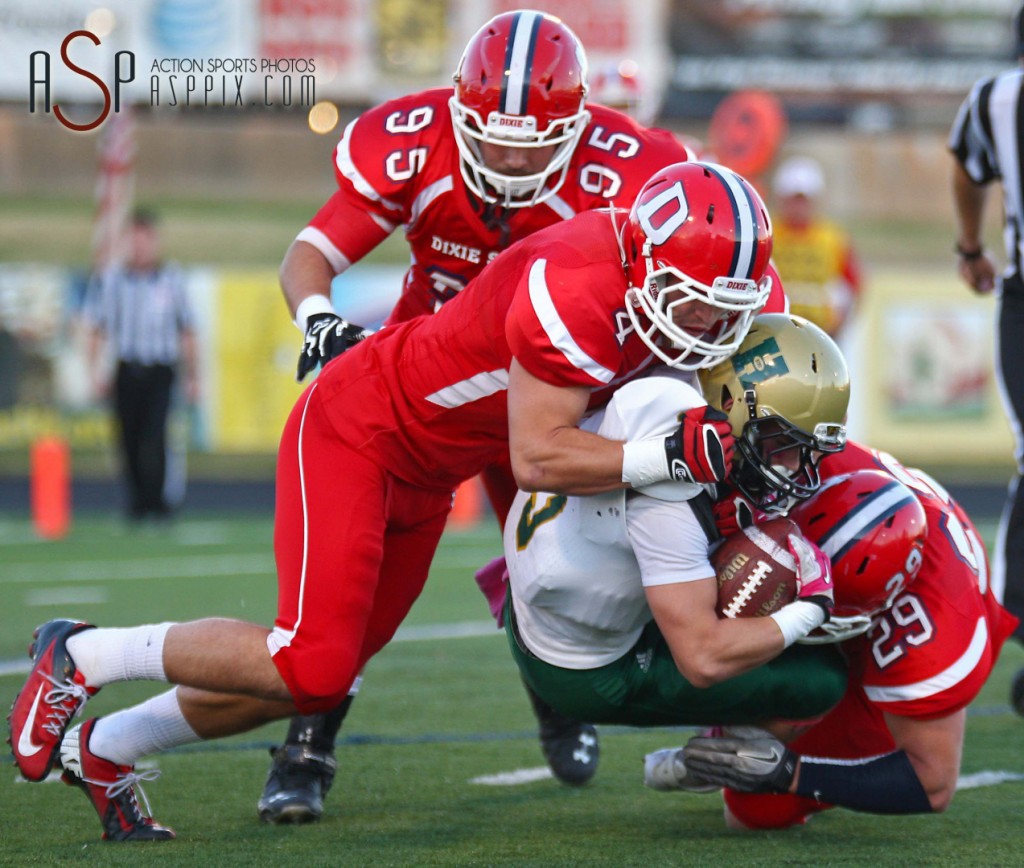 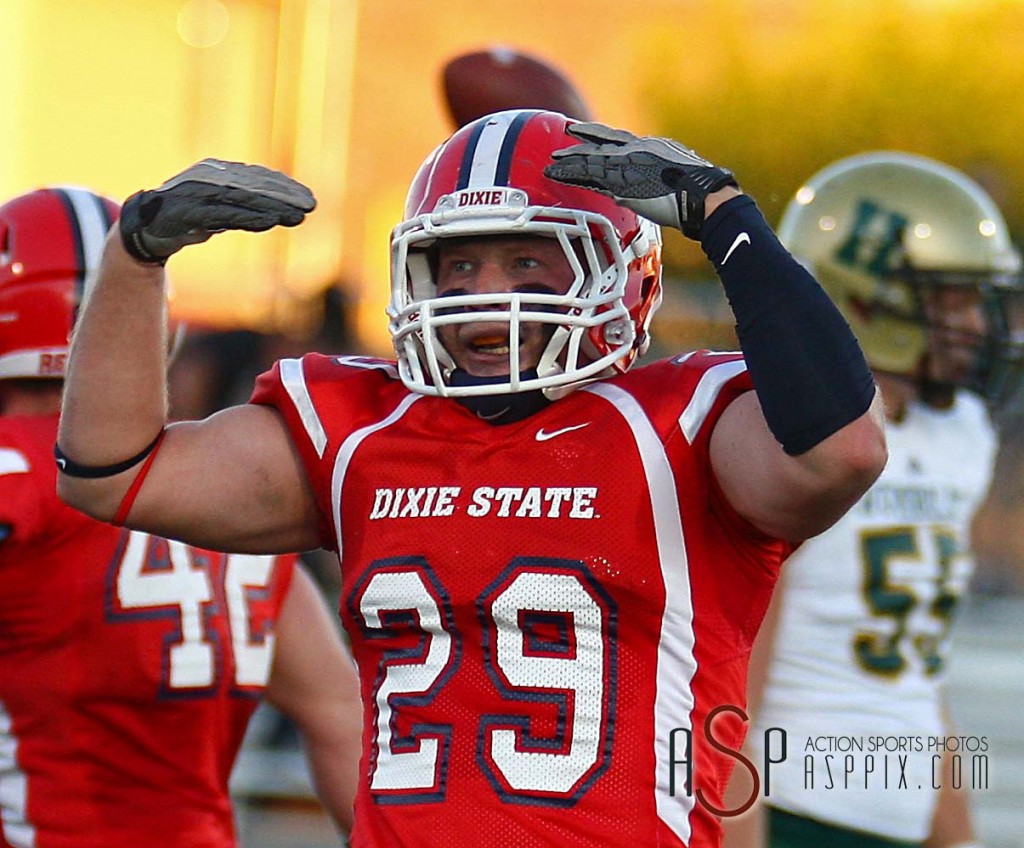 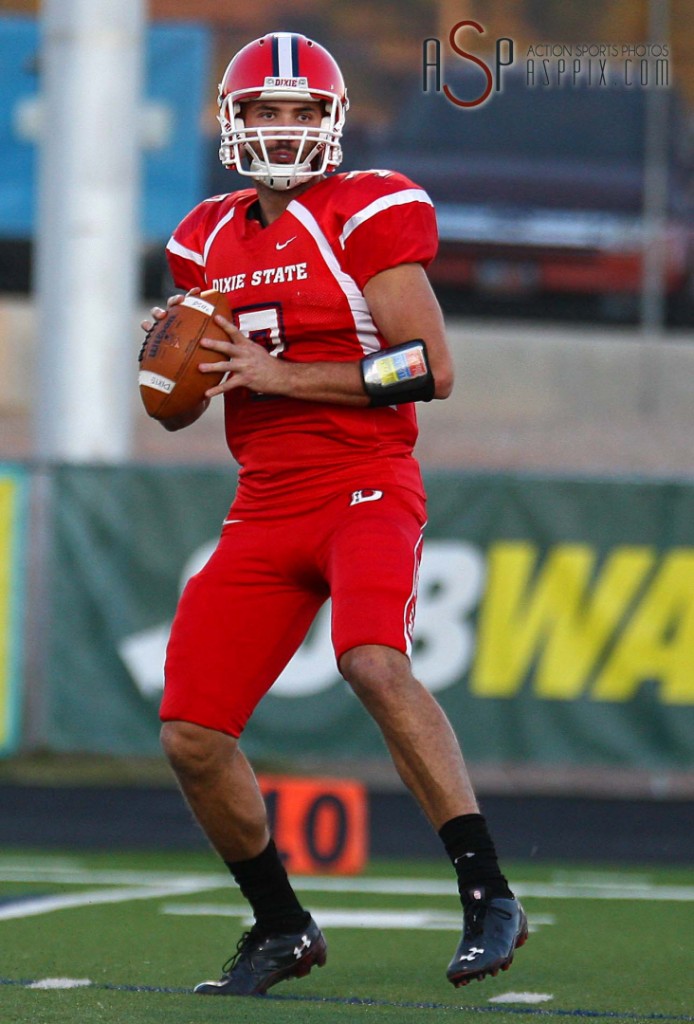 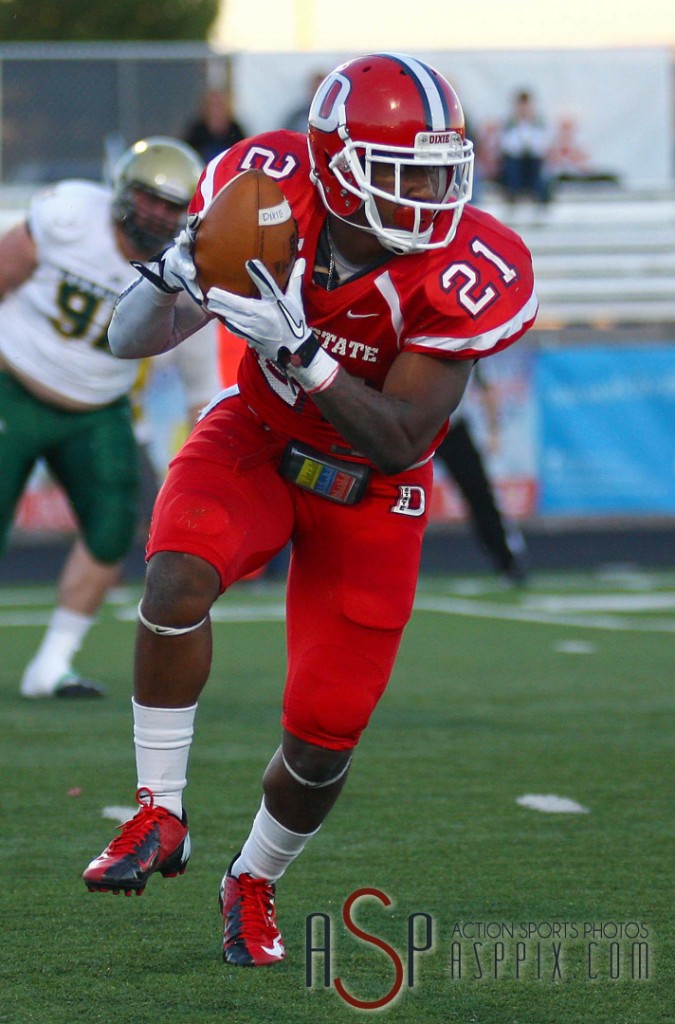 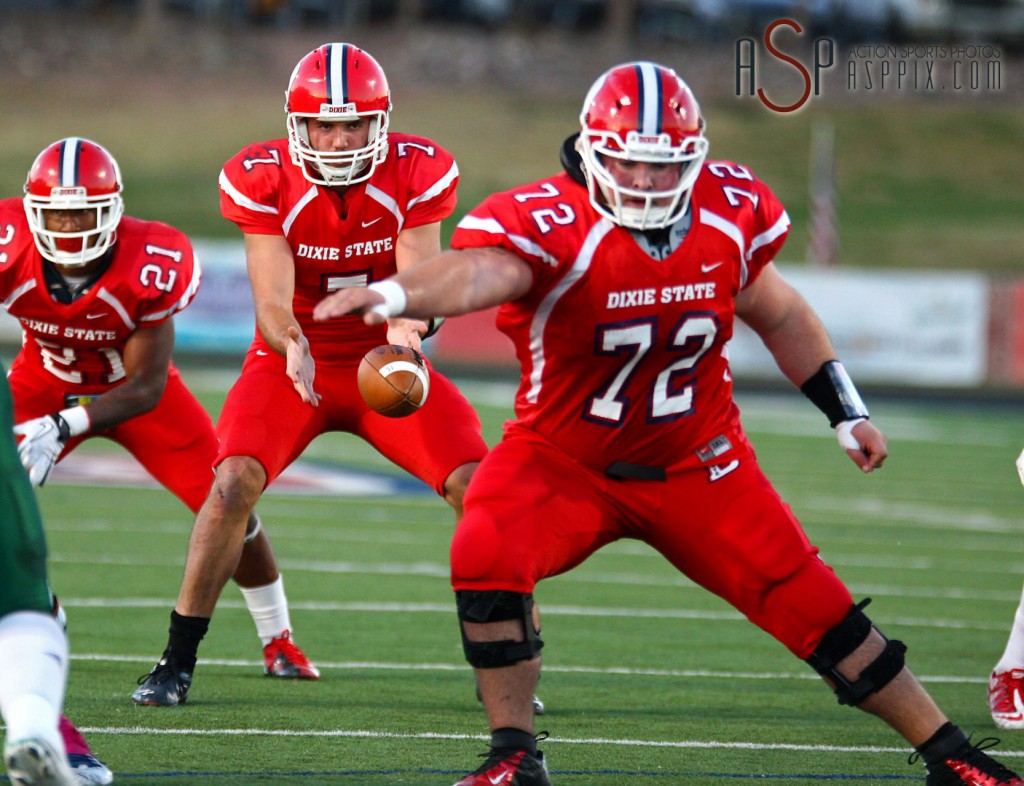 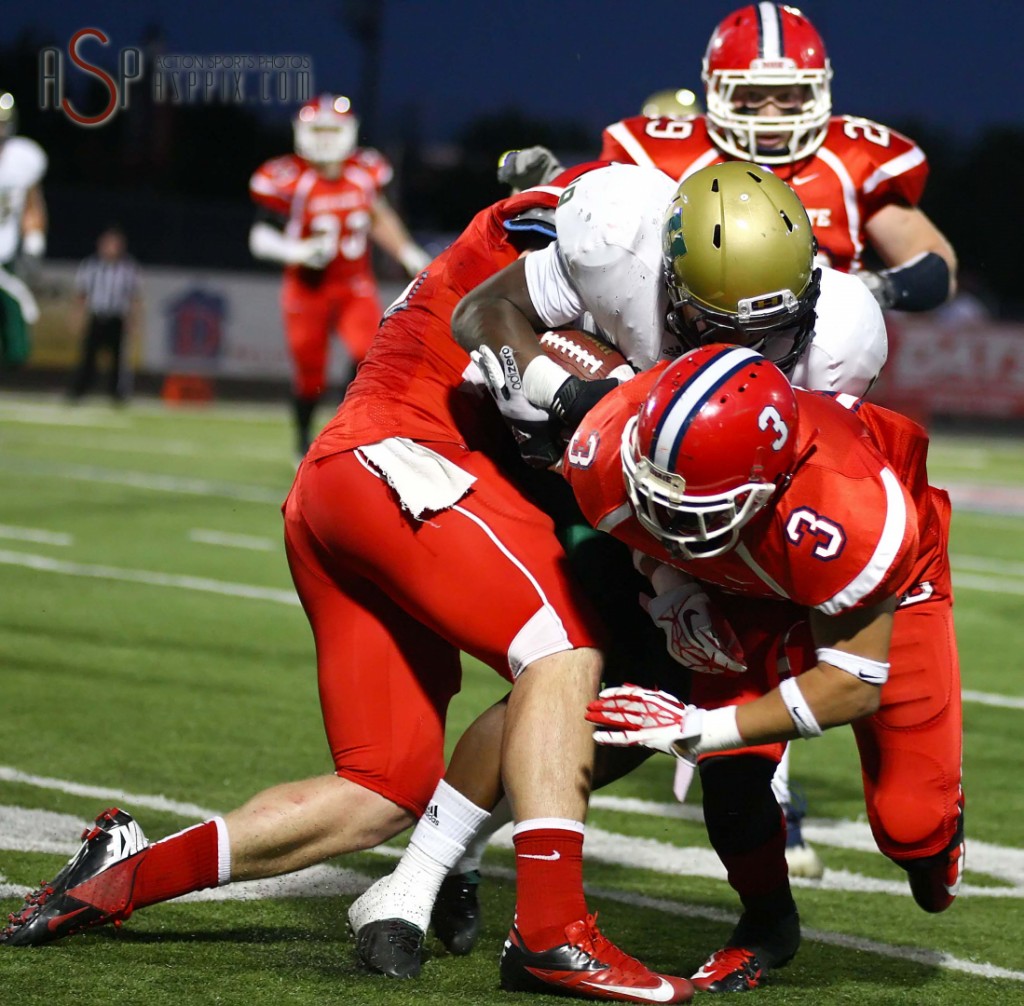 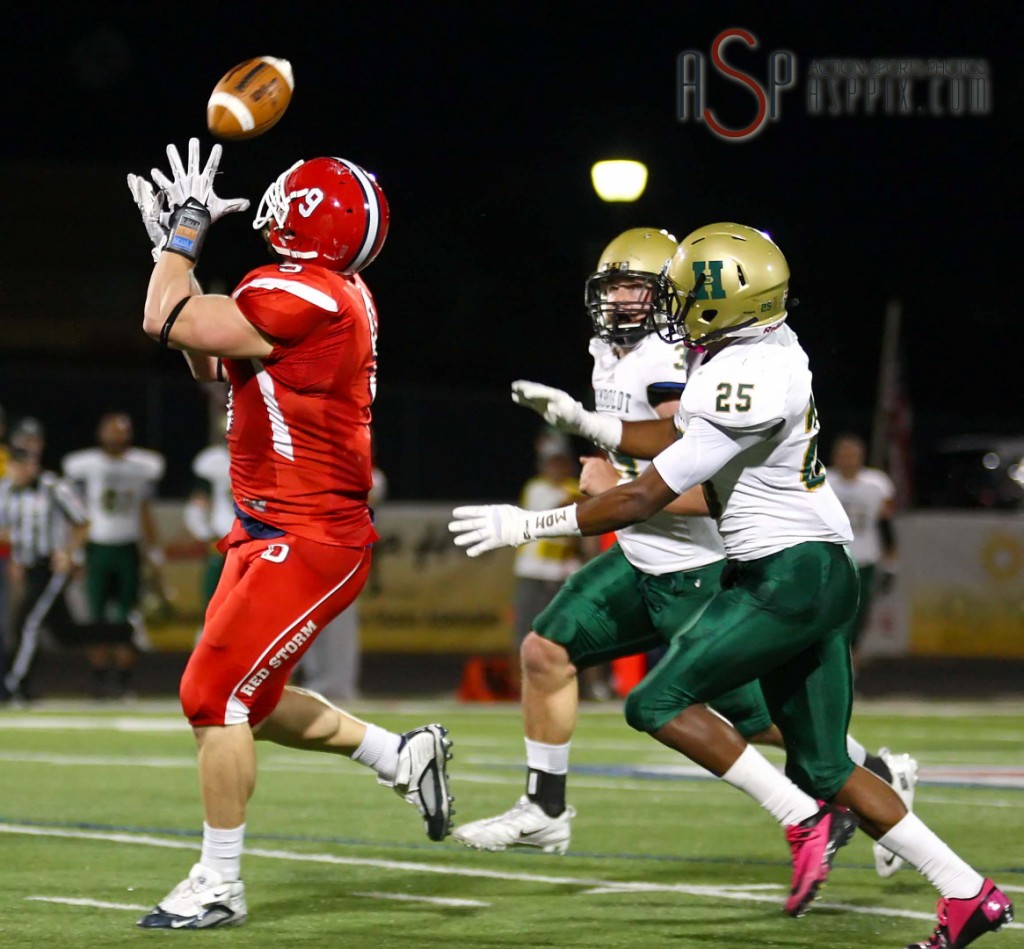