ST. GEORGE – In some respects, Pano Tiatia, 16, is an ordinary southern Utah teenager, juggling school, athletics, family and social life. But he’s also a national and international title-winning boxer, a candidate for the next Olympic team and the source of buzz among the fighting community as a potential heavyweight champion.

Pano Tiatia’s interest in boxing developed early through his father, Paki Tiatia, a former fighter from Samoa. After earning his first major title at age 10, he won the Junior Golden Gloves National Championships in 2007, 2008, 2009, 2010, 2011 and 2012, becoming the only youth boxer in history to win a national title in six different weight classes.

Standing at 5-foot-8, 195 lbs., he currently competes as a heavyweight. His crushing blows have earned him the nickname “Tyson,” which his supporters can be heard chanting when he steps in the ring.

A junior at Pine View High School, Pano not only excels in boxing, but also football, as a star running back for the Panthers. He also participates in rugby and traditional Polynesian dance. He enjoys Polynesian food, listens to old school rap and said “The Avengers” and “Tarzan” are his favorite films.

Along with his own ambition, family and faith drive this young warrior to achieve greatness.

His parents and 10 siblings support his athletic, and life, goals. is dad Paki has been his trainer, coach, counselor and role model throughout his blossoming career. His many relatives and friends, both in the United States and Samoa, also provide inspiration.

“We’ve made a commitment as a family that whatever anyone wants to pursue, as long as they put in the time and effort, we will all support them wholeheartedly,” Paki Tiatia said.

Pano said his biggest inspiration is his grandfather, who taught him how to have heart.

“(I give) special thanks to my Father in Heaven for blessing me with these talents and providing me with the health and strength to fulfill them, and to my parents for raising me and supporting me in every way,” Pano Tiatia said.

This year has been Pano’s best yet. He won gold at the Junior World Team Open, earning a spot on the 2013 USA Boxing Junior Men’s National Team.

In May, Team USA traveled to Uman, Ukraine, to compete in the Victory Day Junior Boxing Tournament. Pano Tiatia faced national champions from eight countries and each time came out on top, winning the gold medal.

“Outside of the ring, Pano is friendly, humble and always willing to help,” Team USA boxing coach Keoni Adric said. “He has been nominated as one of the team captains because he is a good role model and keeps the fighters in line. However, when he fights, he is a different person, showing power, skills and smarts. Pano is our heaviest hitter.”

Team USA returned to Ukraine in September, for the AIBA Junior World Boxing Championships in Kiev. A tough field of national champions from 54 countries proved overwhelming for the American youth in nearly all weight divisions, including Pano’s. After an impressive run, he lost in the quarterfinals.

The teenager also earned the once-in-a-lifetime opportunities of training alongside Team USA in Italy and at the U.S. Olympic Training Center in Colorado Springs, Colo., and also getting one-on-one instruction from internationally-renowned coach Pedro Roque Otano.

Along with his many achievements, Pano has also experienced setbacks this year. Cancer took both his beloved aunt, Lau Tiatia, and his grandmother, Sinei Mauia, a devastating blow to the family-oriented youth.

“It brought him down emotionally, but he fought through it and continued to stay focused on his goals,” Paki Tiatia said.

Pano has traveled more in recent months than many people will in a lifetime, but his heart stayed in St. George.

“I was hardly home this summer,” he said. “Being away from my family has helped me realize how important family is, and appreciate everything I have and what my parents have done for me.”

Upon returning to southern Utah in mid-September, his boxing season ended. He will continue training, but for now, “It’s football time.”

Despite missing nearly half the season due to his boxing commitments, Pano has made a strong return to the field. Last week, his skilled play helped Pine View roll the Payson Lions 32-3 to earn a spot in the playoffs. Paono had 111 rushing yards and scored two touchdowns. Additionally, he was voted one of the pre-season’s most valuable players at 3AA South Region Media Day in August.

“It’s so good to be back with my teammates and coaches. They have supported me with my boxing and allowed me to still be a part of the team when I returned, and I’m grateful,” he said. “Right now, I’m going to do everything in my power to help our team make it to the next level by taking one game at a time.”

He’ll also be focusing on his education. His absence at the beginning of the school year has left plenty of make-up work to do.

Currently ranked No. 1 in the U.S. and No. 5 in the world in the age 15-16 heavyweight division, Pano aims to compete in the 2016 Summer Olympics. He would have to win a national title every year from now until then to qualify — a tall order — but he believes his goal is within reach.

From there, professional boxing is his preferred career choice.

“He could be the next heavyweight champion of the world,” Adric said.

His “Plan B” is football. He will continue playing through high school and hopes to earn a scholarship.

Every day is a whirlwind as Pano tries to balance school, football, boxing, normal teenage life and becoming a young man. By his side through all of it are his biggest fans, his family.

“Win, lose or draw, your kid is going to look for (help) and the first person they look for is you,” Paki Tiatia said. “Our hope for Pano is that whatever career he decides to pursue, he will continue to put in hard work and dedication, and know that we will always support him.”

However the chips may fall in the unpredictable game of life, Pano Tiatia’s future is bright. 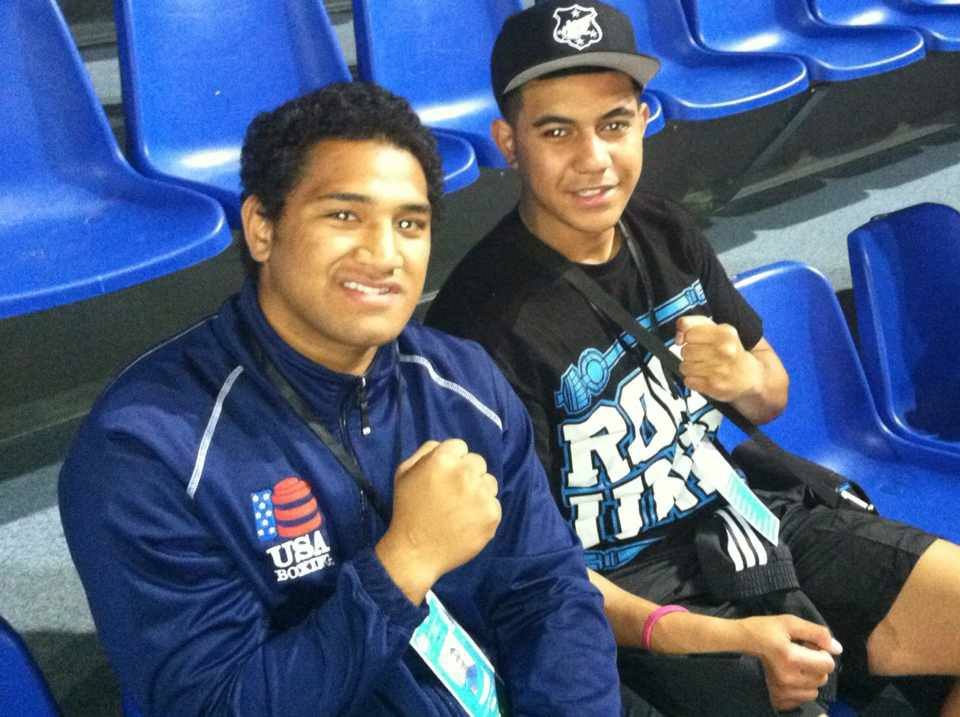 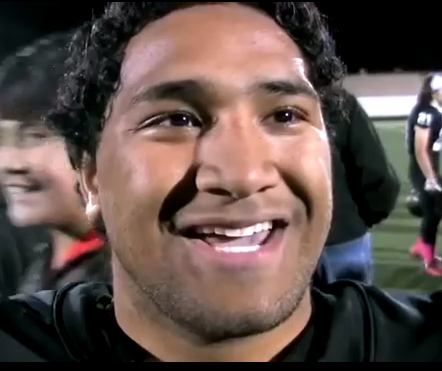 Pano Tiatia, Pine View running back, after last week's win over Payson. The Panthers, 7-2, are on of the favorites for the 3AA state title. | Photo by Bryce Griffin, St. George News 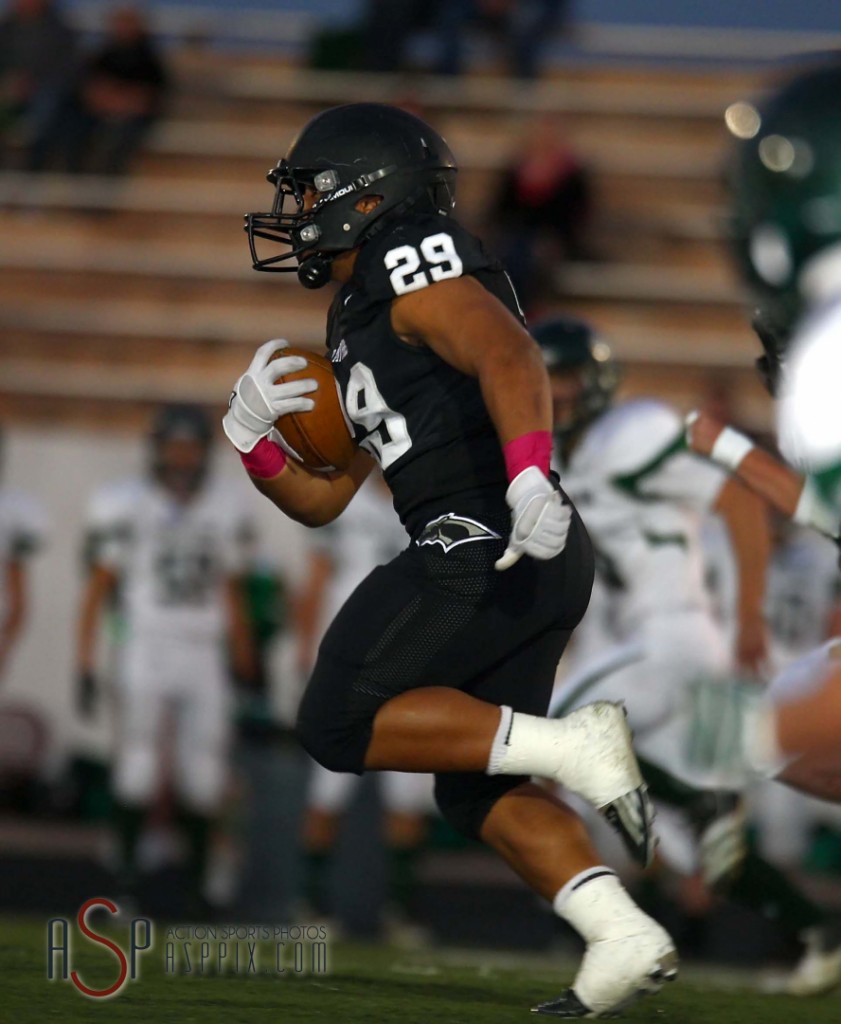 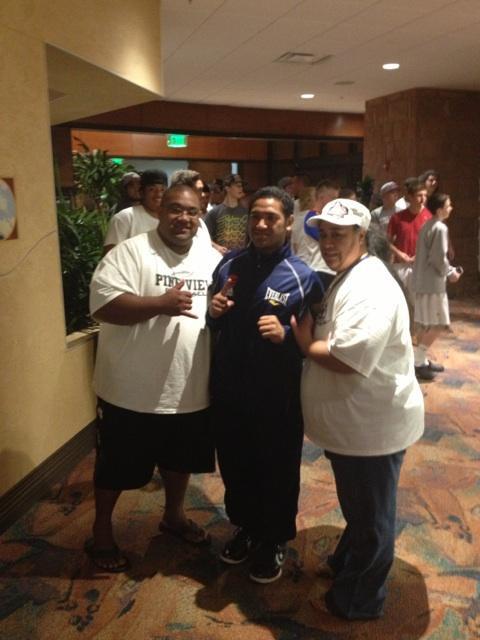 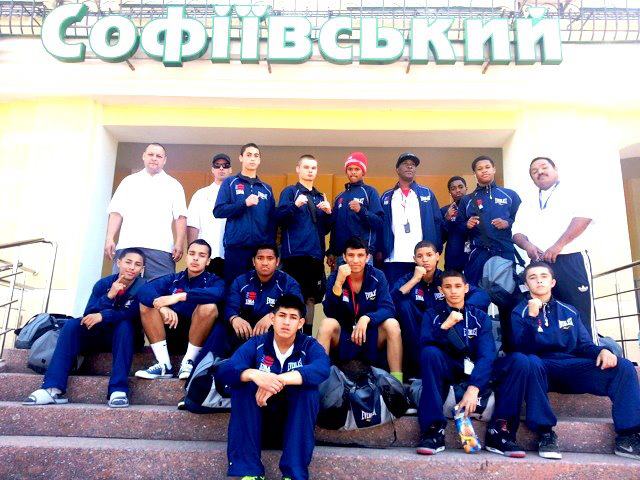