ST. GEORGE – The second in a series of Freedom Forums sponsored by the Washington County Republican Party will be held Saturday from 7-8 p.m. at the Eccles Concert Hall on the campus of Dixie State University in St. George. The special guest speaker will be Congressman Chris Stewart, who represents Utah’s second congressional district. 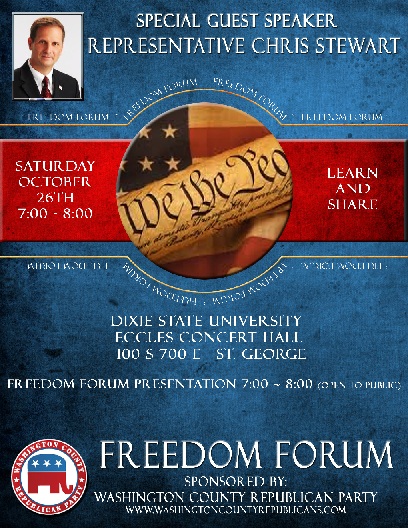 Stewart is currently the Chairman of the Sub-Committee on the Environment. He is also a New York Times best selling and national award winning author, world-record-setting Air Force pilot, and the former owner/CEO of a small business.

The Freedom Forums are designed to be inspirational, educational speeches given by experts, elected representatives, or other noted individuals on a variety of topics including liberty, personal responsibility, free markets, and the role of government. These one-hour events are free and open to the public, and parents are especially encouraged to bring their teenagers and young adults with them.

“Our hope and goal,” Washington County Republican Party Chairman Nick Lang said, “is that the concepts which provide the foundation for America’s greatness can be passed down to the next generation of citizens in our community.”

The group’s first Freedom Forum took place in September with Sen. Mike Lee as the speaker.  The event drew a large crowd, with approximately 500 people attending.

Almquist, Davis to face each other in primary for County Commission seat