GNAC RED LION PLAYERS OF THE WEEK
Offense – Terrell Watson, Azusa Pacific (RB, 6-2, 230, Jr., Oxnard, CA) rushed for a school-record 302 yards and a school and GNAC-record tying five touchdowns (1, 2, 70, 68 and 8) as the Cougars overcame a 23-3 halftime deficit to defeat Simon Fraser 44-36. In the fourth quarter alone, Watson rushed for 232 yards and four touchdowns. That included a 61-yard non-scoring run to set up his final touchdown. He also caught one pass 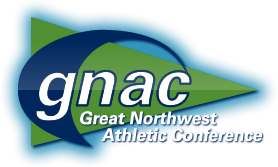 OKOYE SEES RECORD FALL: Former Kansas City Chief Christian Okoye was in attendance Saturday to watch his alma mater, Azusa Pacific, play Simon Fraser and saw his long-time school single-game rushing record fall. Watson’s 302-yard total eclipsed the old school record of 248 held jointly by Okoye (in 1986 against Cal Lutheran) and Marcus Lampkin (in 2005 against Valley City State). Watson also broke APU career records for rushing touchdowns and total touchdowns increasing his totals to 38 and 39. He also became just the second player in GNAC history to rush for 300 yards in a single game joining Central Washington’s Nat Conley who had 322 yards against Humboldt State in 2001. In two seasons in the GNAC, Watson has rushed for 2,032 yards and ranks 10th on the GNAC all-time chart. Counting the season before APU joined the GNAC, Watson has a grand total of 2,729 career rushing yards.

BIG SECOND HALF FOR COUGARS: Azusa Pacific’s 41-point second half was the highest scoring second half in school history. The Cougars scored 51 points in a half twice in the 2004 season, but each came in the first half of games. Its 31-point fourth quarter was just three points shy of the GNAC record for most points in a quarter set by Central Washington against Western Oregon.

HOW CLOSE WAS THE FIRST HALF?: If not for two double-digit comebacks by co-leaders Central Washington and Azusa Pacific Saturday, five teams would have finished the first half of the conference race tied with 3-2 records. CWU overcame a 17-3 first-half deficit to edge Dixie State 27-24 and Azusa Pacific overcame a 23-3 deficit at halftime to edge Simon Fraser to stay tied for first. The largest deficit ever overcome in GNAC history was 24 points by Humboldt State against Western Oregon in 2001.

GNAC COMPETES IN SUPER REGIONAL III: The GNAC will compete in Super Regional III this fall for the second year in a row. Also part of the 44-team Super Regional III is the MIAA (Mid-America), the Great American Conference and the Northern Sun. Six teams from each of the four regions qualify for the playoffs.

GAME RECAPS
Central Washington 27, Dixie State 24 (at Ellensburg):
Jesse Zalk scored the tying touchdown on a seven-yard reception with 2:28 left, then set up a 44-yard game-winning field goal by Sean McDonald with a 26-yard catch to the Dixie 29 with 14 seconds remaining as Central Washington rallied from a 17-3 halftime deficit to edge Dixie State … After Zalk’s final catch, Jordan Todd ran two yards to the 27 before CWU called time out with six seconds left. McDonald’s game-winner then sailed between the uprights as the clocked ticked down to one second … CWU won despite being outgained by the Red Storm 479-341. Dixie went up by 14 points at halftime, scoring on a 22-yard field goal by Dillon Bishoff in the first quarter and on touchdowns by Myles Burton and Joe Don Duncan in the first and second periods. Burton rushed for 106 yards, half of it on a 53-yard touchdown run with 4:08 remaining in the first quarter. Duncan caught seven passes for 150 yards, including an 11-yard TD pass from Griff Robles at the 12:16 mark of the second period … Dixie had four opportunities to stretch its lead to three touchdowns in the second quarter and early in the third period. Three times (in the second period) they turned the ball over on downs (on plays that originated from the CWU 8, 2 and 23). Then on its first possession of the third period, DSU reached the CWU 8 before a blocked field goal by James Fakkema set up a 41-yard, 10-play TD drive by the Wildcats.  … Linebacker Jake Duncan led Dixie’s defense with 16 tackles and a fumble recovery, while defensive back Robert Metz had eight tackles and also forced a fumble.
Western Oregon 38, Humboldt State 21 (Oct. 12 at Monmouth): Joe Harris rushed for 182 yards and two touchdowns to power Western Oregon to a 38-21 win over Humboldt State. Harris gave Western Oregon the lead for good (17-14) on a nine-yard run late in the second quarter, then capped off a 21-point fourth quarter with a 24-yard touchdown run with 5:20 remaining … His second quarter score came immediately after Humboldt State fumbled away a punt which was recovered by A.J. Hull at the 9-yard line.
Azusa Pacific 44, Simon Fraser 36 (at Glendora, CA): Azusa Pacific rallied from a 20-point deficit, scoring 31 points in the fourth quarter to defeat Simon Fraser and remain tied for first place in the GNAC with Central Washington … APU running back Terrell Watson rushed for 302 yards and five touchdowns, scoring on runs of 1, 2, 70, 68 and 8. In the fourth quarter alone, he rushed for 232 yards and four touchdowns. That included a 61-yard run to set up his final touchdown …Simon Fraser led 23-3 at halftime as Chris Tolbert scored on runs of 3, 1 and 2 yards and Chad Heerspink kicked a 41-yard field goal. APU, however, then scored 24 unanswered points in the third and fourth quarters to go ahead 27-23 on Watson’s 70-yard gallop … Tolbert put SFU back on top on a one-yard run, his fourth TD, but the Cougars’ Jamie Cacciatore tied it at 30-30 with 6:09 left on a 45-yard field goal … That’s when the fireworks really started as on the third play of the drive Clan quarterback Ryan Stanford hurled a 51-yard TD pass to Robert Borcky to give SFU a 36-30. The lead lasted just 14 seconds as on the first play following the kickoff, Watson raced 68 yards for the tying score. An extra point by Cacciatore made it 37-36 with 5:10 remaining. APU’s next drive was nearly as short as Watson carried the ball twice for all 69 yards.