CEDAR CITY – The 2013 Larry H. Miller Tour of Utah is scheduled for Aug. 5-12. Deemed “America’s Toughest Stage Race,” the Tour of Utah is a week-long, professional stage race for the best cycling teams in the world. 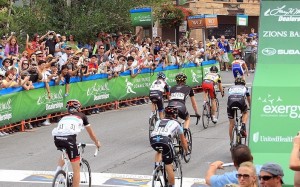 Now in its ninth year, the race will include some of Utah’s most beautiful and challenging terrain, with lush forests and red rock spires in the south and the urban corridor and epic peaks of the Wasatch Front in the north. The race course will cover a record 586 miles and more than 43,000 feet of climbing.

The event starts on Aug. 5 at 3 p.m., with a presentation of the teams at the Adams Shakespearean Theatre in Cedar City. A total of 16 professional teams from Australia, Brazil, China, Italy, Luxembourg, South Africa and the United States will compete in the race, five of which participated in the 2013 Tour de France.

The race will begin Aug. 6 in Brian Head, with a stage running to Cedar City. The next stage will run from Panguitch to Torrey; there are six stages total. This is the first year the Tour of Utah has included Southern Utah venues on the race course.

The Tour of Utah will be broadcast nationwide on television via the FOX Sports Network and worldwide via a live web stream. The race is free for all spectators to attend.

The event is owned and operated by the Utah Cycling Partnership, with Larry H. Miller Group of Companies being the title sponsor. Other sponsors include Zions Bank, the Utah Office of Tourism, the Utah Sports Commission, and University of Utah Health Care. In 2012, the Tour of Utah generated $14 million in direct economic impact for the state.