The quartet will enroll at DSU in the fall of 2013 and being their inaugural seasons for the Red Storm’s 2013-14 campaign. This groups joins guard Mason Sawyer, who signed in the November early period, as new members of the DSU program.

Garrett, returning home for his final year of basketball eligibility, is transferring from Division-I San Jose State University. He started 16 games for the Spartans last year while averaging 6.9 points and 2.3 rebounds per game. During the 2012-13 season, he led San Jose State in scoring three times, including a season-high 25 points versus UT-Arlington. Prior to SJSU, Garrett played his sophomore season at Salt Lake Community College after returning from his church mission to Borneo. As a freshman, he played at the College of Southern Idaho. He prepped at Pine View High School, where he was an all-state selection twice. As a senior, Garrett averaged 16 points per game for a Panther squad that was defending its 2007 Utah 3A state championship team – of which he was a major contributor.

“We’re very happy to have Louis join our program, and get back home,” DSU head coach Jon Judkins said.

Judkins added: “Louis is a tough and athletic player who has the ability to shoot the ball deep or finish around the rim. With his versatility and experience, Louis will be a great asset to our program.”

Rex, a former Pine View teammate of fellow signee Louis Garrett, transfers to Dixie State after redshirting last year for the Wildcats of Weber State. As a sophomore at Salt Lake CC, he averaged 6.1 points and 4.9 rebounds, including two starts, for the 22-9 Bruins. Prior to his mission in Washington, D.C., Rex appeared in 31 games for the 23-9 Badgers – averaged 6.2 points and 4.2 rebounds a game shooting 51 percent from the floor. While at Pine View, Jordan was an all-region and all-state honoree as a senior in 2008 and played a major role in the Panthers’ 2007 state championship run. Rex will be the second member of his family to don the colors of DSU – his brother Nick played for the (then) Rebels from 2006-2008.

Judkins said: “We’re very excited about Jordan joining our program. He’s a rugged post player who will give us much needed strength and toughness on the interior. Jordan will be a great representative of our program both on and off the court.” 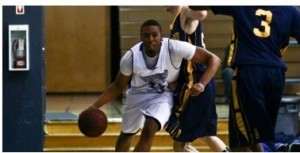 Williams becomes the second player to transfer from Cerritos College in Southern California (Jeremiah Barnes) and sign with Dixie State. He was twice selected to the All-South Coast Conference First Team after averaging 11 points, six rebounds and two blocks a game over his two-year career playing for head coach Russ May. Darius was MVP of the Falcons in both years. Williams posted a 14-point per game average as a senior and All-Moore League selection for Long Beach Jordan.

“Darius is a great player and an outstanding young man,” Judkins said. “We are lucky to have him as part of our program. He’s a true post player who will be a handful around the basket and will give us a presence in the paint on both ends of the floor.”

Ensign will have all four years of eligibility available when he attends Dixie State in the fall upon returning from his church mission in Mississippi this August. A 2011 graduate of American Fork High School, Nate averaged seven points, five rebounds and a block as a member of the 2011 Utah 5A state runner-up Cavemen. Ensign had a career-best 14 points and seven rebounds against Jordan on January 7.

“Nate is an wonderful young man,” Judkins said. “He will be a great addition to our program. He has big upside because he has rare athleticism for his size to go along with an advanced skill set. We are excited about Nate and expect him to be a big part of our programs future.”