MESQUITE, Nev. — They may be amateurs, but they are the future of Mixed Martial Arts. And Saturday night they are going toe to toe at the Casablanca Resort’s Showroom. 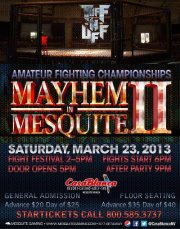 Billed as “Mayhem in Mesquite II,” 11 bouts are scheduled with the usual fanfare surrounding the fights, including a pre-party, celebrity greetings and an after-party featuring DJ JohnnyUtah.

Chris Irwin, COO and fight promoter,  said the event has grown in interest and magnitude since last year’s original.

“We’re really excited about this,” Irwin said. “We’ve got so many great events leading up to the fight. You can meet (MMA Champion) Cort McGee, who is actually from Utah … and Stitch Duran. We’re going to have live radio with The Hawk, food and drinks, and of course after that you get to watch these amazing fights.”

Unique to this year’s fight card is the addition of three women’s bouts, including a grudge match with Marina Shafir.

Tara Lee Vichtenvalder, one of the female MMA fighters tonight, said she got into the sport originally by trying to lose weight. She tried kick-boxing, then attended an event and said she thought she could do it. And so she has.

Irwin said the fighters hail from all over the western United States, including some local St. George fighters.

The fight festival begins at 2 p.m. and then doors open to the Showroom at 5 p.m. with the bouts actually beginning at about 6 p.m. All times are Pacific.

Honsvick taps out, loses to Dillon in pro debut at 'Mountain Force 22' MMA event in Hurricane