ST. GEORGE – The Hope Pregnancy Care Center hosted its 8th annual Fundraising Banquet at the Dixie Center on Saturday night.  This is the largest annual fundraiser for the Center, and money raised is used to support the various ministries that the Center provides, namely: peer counseling for women and men who find themselves in or related to an unplanned pregnancy;  parenting classes;  fatherhood classes;  abstinence education;  and a post-abortion and education class for those who are looking to move past the pain of an abortion.

The night began with a silent auction, including various items that were donated by the community, a nice dinner, and then Shannon Gerber, the Hope Pregnancy Care Center director, gave a 10-minute update on the center’s progress since the last banquet. Gerber presented a slideshow of the new babies born and families helped over the last few years. Gerber also mentioned an upcoming concert featuring JJ Heller and Sanctus Real on May 18 at the Cox Auditorium in St. George, Utah.

Tom Manning, a volunteer in the Fatherhood 101 program, said that he helps train the men on how to be a good father.  “It’s an opportunity to take them from being scared … to then taking responsibility and thriving with the child,” Manning said.

The MerryJo Cook Award, named in honor of founder MerryJo Cook, was presented to RISE, a nonprofit organization that specializes in home and community-based support services for children and adults with developmental and other disabilities.

“We love helping children,” said Cook. “That’s what it’s all about.” 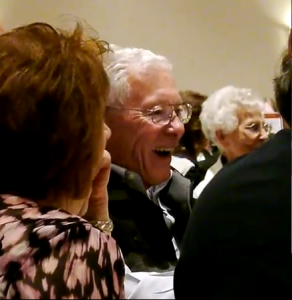 This year’s special guest was John Branyan, a Christian comedian who tours with Tim Hawkins in his Rockshow Comedy Tour.  Branyan was funny and kept the audience of over 400 people laughing nonstop.  To watch Branyan tell his version of the Three Little Pigs, watch the full video below.

Hope Pregnancy Care Center offers its services completely free of charge.  They are supported largely by the community through monetary donations, and are also supported by their thrift store, The Hope Chest.  The Hope Chest is located next to the Electric Theater on Tabernacle in St. George, Utah.  Hope Pregnancy Care Center is located across from the Women’s Hospital on 500 South in St. George, Utah.

Second time is the charm for 2020 'Dixie's Got Talent' winners