Last years qualifiers keeping their hands on a 2001 Chevy Impala. 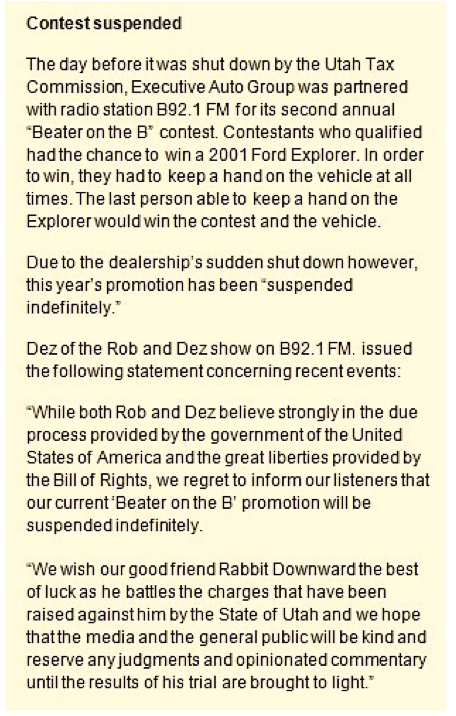 ST. GEORGE – Locals have been asking Cherry Creek Radio and Executive Auto Group to host another contest like they did last year. So to give back to the community together they have put forth their second contest in which the public can win a free car as easy as laying eyes on it – and one hand.

Here’s the catch, 50 qualifiers over the age of 18 will be selected to keep their hand on a white 2001 Ford Explorer, with bells and whistles, for as long as they can. The person who keeps their hand on the car the longest will win the car.

Last year the contest went on for 96 hours.

During the contest there will be a 15 minute break every two hours – in the beginning. But as the contest progresses, the breaks will be further apart in hours.

“Some people fell asleep during their 15 minute break and didn’t make it back to the car,” Gio Mazur and Rabbit Downward from Executive Auto Group said, “so then they were disqualified.”

Having friends and supporters may come in handy to help entertain and feed the qualifiers, though lunch and dinner will be provided. Be sure to tell an employer and friends if you are considering competing.

You can enter the contest in two ways: entering your name at remote broadcasts or by visiting Executive Auto located at 543 N. Bluff Street in St. George and dropping your name in the box. The names will be drawn every Wednesday through March 13. The contest will begin on March 20 at 5 p.m.

“Chances are we might start doing this every year” said Downward.