SALT LAKE CITY  – Sen. Orrin Hatch announced  Friday the nominations of 31 Utahns to the military service academies for this year. These young men and women are from throughout Utah and have been nominated to one or more of our nation’s service academies: the Air Force Academy, the Naval Academy, the Military Academy at West Point, and the Merchant Marine Academy.

“Every year I have the distinct pleasure of nominating truly outstanding young Utahns to the military service academies, and I am always so impressed with the incredible credentials these young men and women have already accomplished to get them to this point,” Hatch said. “The military service academies provide some of our nation’s best and brightest with the opportunity to receive a truly first-class education; and training to serve our country with distinction. I am proud of the Utahns we have nominated this year and believe they will represent Utah well.”

Selection criteria include interviews, SAT/ACT scores, class rank, GPA, school records, evaluations by teachers and counselors and participation in extracurricular and athletic activities.  After Hatch submits the nominees to each academy, the schools then select the candidates of their choice. The nomination is an important first step in the process.

The following are individuals who have received a nomination from Senator Hatch.  The information includes the academy/academies they have been nominated for and their home town. 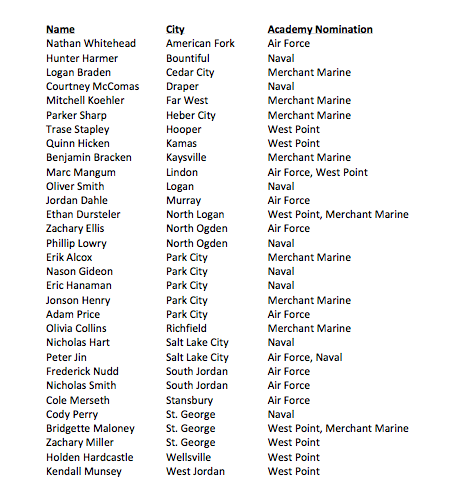 Submitted by: The Office of Sen. Orrin Hatch