ARIZONA STRIP, Ariz. – Mohave County Sheriff’s Search and Rescue units successfully located a 27-year-old man on Feb. 10, after he had been reported missing by his mother. Actions the man took were effective in helping himself not only to be located but to survive a bitter cold night of below freezing temperatures and snow when his car broke down, stranding him and his two dogs.

Matt Telford, of St George, Utah, left that Saturday to go hiking in the Arizona Strip and told his family he would return home that evening.

Exploring remote areas, and making discoveries, are not uncommon for Telford. Two weeks before, he was out near Seegmiller Mountain, where he came upon a mysterious headless body wrapped in a sweater that alarmed him – until the Sheriff’s deputies later determined it to be the remains of a deer carcass.

“I go rock hunting a lot, I’m kind of into geology,” Telford said. “I just like to go a lot of places that people haven’t been to, and find things people haven’t seen, like minerals and rocks, and I wanted to see caves too.”

On this particular Saturday, Telford set out with an interest in seeing the Grand Canyon – not the main part, he said, but the north end. He ventured into a remote area of Whitmore Canyon near the Bar 10 Ranch – a working guest ranch that caters to river runners and Grand Canyon visitors, 82 miles out from Interstate 15 by solitary dirt road, and about nine miles from the north rim of the Grand Canyon.

“The road had snow and mud on it and the 4-wheel drive got taken out of my car,” Telford said, “but right there where I got lost, it made a turn, and it started going down – and so I decided to go up another road and go up there but my car actually broke before I was able to get to the top.

“There were paths of snow, in the trees and on the ground, it was snowing off and on, like tiny little hail, it was really cold so I didn’t get out of the car much except to make the arrows.”

Telford lays out arrows on the ground

Lewis is a member of the Heaton family that founded, owns and operates the Bar 10 Ranch. She and her immediate family had been out to the ranch that weekend and were returning home when they drove over some rocks in the road.

“I told my husband, ‘I think that’s in the shape of an arrow,’” Lewis said. “We were heading north and the arrows were heading south about eight miles into our travel home … and we drove further and then they turned into sticks and took up about half the lane.”

Lewis said they took pictures and radioed into town and to the Bar 10 Ranch and asked if someone was trying to direct people to the ranch. Nobody knew of the arrows.

The road was snow-packed, she said, and it had not been so on their way in to the ranch for the weekend, so they knew the arrows had to have been placed that day. It was dark, she said, as they passed the last of the arrows at 7 p.m. and there were snow flurries.

The Lewis family continued on about 50 miles until they first ran into a man with kids who had run out of gas while out cougar hunting, and then they themselves got a flat tire.  At this point, Lewis said she was able to get service on her cell phone:

“Up came Facebook with ‘my brother is missing on the Arizona strip.’”

Lewis reported the arrows found to 911 and then came upon a search and rescue unit. Lewis showed them the Facebook message and told them about the arrows.

“The search and rescue team said they would never have gone out where the arrows were, that they had had airplanes and helicopters looking for him all day – and the day before.”

They followed those arrows continuing off the dirt road all the way to Telford, Lewis said.

Telford had hunkered down so when the Lewis family passed nearby on the road, he didn’t see them.

When Telford found himself stranded, he said he knew he was too far to head out on foot. He was unable to get phone service, even after finding a 20-foot-tall tractor, climbing up to the highest point attempting to get service. Add to that that his phone battery was draining: “I’ll say it was dying all day.”

“I spent the night out there. I had a lighter so I could’ve made a fire – I chose to stay in my car. I had an extra pair of pants, an extra sweater, I had two sleeping bags, and two dogs with me – so I made a little fort and huddled.”

Telford and his dogs, Koda, a pomeranian, and Buddy, a border collie – black lab mix, huddled and shared a packet of six crackers.

“I gave two crackers to each of my dogs, and I had two,” Telford said.

He had eaten two value menu sandwiches from McDonalds before heading out that day, and he had dog food and two pop-top cans of chunky soup that had been in his car through two summers. But his bigger concern was water. He had a gallon of water, a 32 oz. bottle of water and another container of water he brought for his dogs – but by morning the water had frozen.

“I didn’t eat any of the soup,” Telford said, “I chose not to eat that day, I did have guns with me at the time and there were a lot of birds and rabbits,” considering what he would have done had he not been found.

“I figured I’d get found – there was a lot of snow – figured I could hack snow into the containers.”

At about 1 p.m. that Sunday SAR units responded to an area known as Wolf Hole Valley and Seegmiller Mountain where deputies had learned Telford had been, Mohave County Sheriff’s information officer, Trish Carter said. In fact, he was a long way from the area and the deputies were redirected when they encountered the Lewis family, learning of the arrows on the road.

After driving approximately 60 miles of dirt road from Interstate 15 (or 82 by rancher Lewis’s account) to reach the area, SAR members located Telford in good health in the area of Whitmore Canyon, which is near the Bar 10 Ranch on the Arizona Strip in the general area located near Kinney Point. 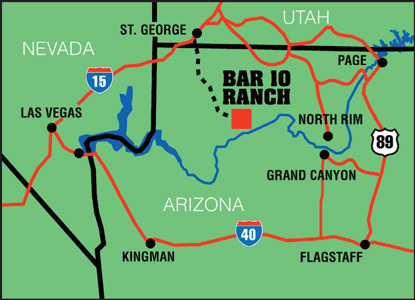 'The men were gone, and the women stepped in'; 97-year-old World War II riveter recounts wartime