ST. GEORGE – While Dixie Ambulance Service continues to speak out against the 66-page recommendation given to the Bureau of Emergency Medical Services, which recommends that Gold Cross Ambulance be chosen to replace Dixie Ambulance as St. George’s exclusive 911 emergency transport provider,  the City of St. George has yet to issue an official, unified statement concerning the matter.

However, some individual members of city government have said they have questions. 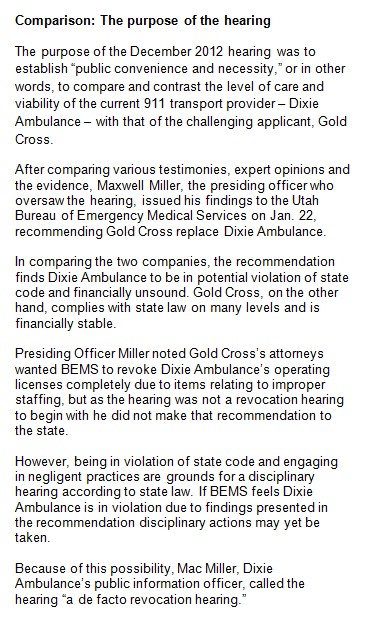 Though the recommendation has been made, some in city government have questions about it and the process by which it came about.

City of St. George Mayor Daniel McArthur said he wondered why no questions were asked in the recommendation concerning patient care outcome. Has Dixie Ambulance ever not picked up anyone? Has anyone died because of inadequate care? Those are the questions he wants answers to, he said.

“I don’t think (the recommendation) really addressed that,” he said.

As to the process itself, and the hearing that accompanied it, he said, “I think it turned into something it wasn’t meant to be.”

Gail Bunker, a member of the City of St. George City Council, said in an email to St. George News: “I honestly thought the process was an audit of (Dixie Ambulance) and was a little surprised with the result.”

Concerning the recommendation, she said: “I feel nothing has been revealed to indicate inferior care to patients. (Dixie Ambulance’s) history of response, stabilization, professional care, and transport has not been questioned. That to me is the deciding factor.”

“I thought this was a review process,” Council Member Jimmie Hughes said. He said he also thought it was odd that the recommendation weighed so heavily in Gold Cross’s favor.

Jon Pike, who has background in health care administration with Intermountain Healthcare, said he has no concerns about the recommendation.

“I believe I have a good understanding now of the issues, the testimony, the process, and the recommendations,” he said.

“It was a great experience for anyone who wants to know the truth about (Dixie Ambulance’s) quality of care,” Hughes said. He said he spent between five and six hours with Dixie Ambulance personnel. He said he recognized that didn’t qualify him as an expert; still, after the ride-along, Hughes has taken issue with aspects of the recommendation, going so far as to call parts of it “ludicrous.”

While travelling with Dixie Ambulance on emergency calls, he observed how the staff gathered patient information and gave it to the staff at Dixie Regional Medical Center. He said he watched as information was written on the notepad which the recommendation describes as an inadequate method of data collection. He said it is not a typical note pad, but one that has a detailed check list on it.

“That thing has been blown out of proportion like no other,” Hughes said. While at DRMC, he said he also watched a nurse make a quick note about an incoming emergency patient on a napkin.

While riding in the ambulance, Hughes said he asked the staff about the recommendation. He said they told him they “resent the fact they are portrayed as ill-equipped and understaffed.”

From his own observations, Hughes said the assertion that Dixie Ambulance “is understaffed and under-equipped is ludicrous.”

Mayor McArthur said he wouldn’t opt for a ride-along himself, because he didn’t feel it would be a “true comparison” between the companies.

Hughes said he also visited the St. George Communications Center. He said St. George has a great communications system, but that some issues could be worked out between the dispatch center and Dixie Ambulance, though he did not elaborate on what those particular issues were.

“There are some issues that could be worked through,” he said. “It takes two to tango.”

Pike also visited the dispatch center. “I think the issues that exist surround those of the radios and the dispatch system,” he said.

However, he added he felt Dixie Ambulance could improve its side of the issue by using the mobile Spillman CAD (computer-aided dispatch) system on its vehicles. Spillman is the CAD system employed by the St. George dispatch center. Its reliability was a subject of debate during the December hearing, and it responded to the debate in an interview which St. George News reported on Dec. 28, 2012.

Some members of the community believe that Pike asked Gold Cross to review Dixie Ambulance’s services. St. George News asked the councilman about this and received the following response via email:

“…I did meet with Gold Cross Ambulance’s president, Mike Moffitt, several years ago at his attorney’s request. They talked with me about their experience, their quality, their staffing, and their response times. Later they decided to apply to the state to have the current ambulance licensee reviewed and potentially replaced by Gold Cross. The mayor and city council agreed to support this state process, but not necessarily either party.” (Emphasis added.)

According to state law, a municipality has the power to choose who it wants as its ambulance provider.

“The council will weigh in,” McArthur said.

“We deserve to weigh in,” Hughes said, “and it’s our responsibility to.”

Both Hughes and McArthur said they have no issue with Gold Cross.

“I have nothing against Gold Cross,” Hughes said.

McArthur also said doctors he knows have “spoken highly of both company’s personnel.”

As of Feb. 2, an official statement has yet to be made by the city council

Tammie Goodwin, a spokeswoman for BEMS, said that if the city council supports Dixie Ambulance and the Bureau still rules in favor of Gold Cross, the city may have to issue an RFP, or Request For Proposal, which is an open bid for ambulance providers.

Maxwell Miller, the presiding officer who wrote the recommendation, referred to an RFP as “a more democratic process for selecting an EMS provider” that the public could pressure the city into issuing.

Should Gold Cross take over 911 ambulance service in St. George, Dixie Ambulance will lose approximately 75 percent of its coverage. Yet, it will be allowed to continue operating in the remaining 25 percent of its original service area which includes Santa Clara and Washington.

At this prospect, Hughes said, “(Dixie Ambulance) is good enough for Santa Clara and Washington, but inadequate for St. George?”

'Zion closes immediately'; Gov. Herbert tells visitors they must pack up and go

5 engines respond to an equipment fire at the wastewater treatment plant in St. George

‘Every winter we see an increase of unlicensed companies’; Officials advise against harmful tree topping