ST. GEORGE – A study and a few interviews with those in technology repairs and resell demonstrate what the future of technology may or may not have in store for us.

The leading edge of technology through the Internet and mobile devices is changing the way people communicate, study and work. Anybody anywhere can upload information, read news and write with the tips of their fingers, all on one device. And they can do so even more modernly through their voices by allowing the technology to auto-dictate what they’re saying. “Goodbye pen and pencil, hello keypads.” “Goodbye keypads, hello voice dictation.”

A full computer keypad, as well as the brains of a computer, now inhabits nearly every mobile phone. Voice dictation among smartphones is a new easily accessed safety feature for those on the go; it is quickly becoming more popular.

St. George News performed a small survey of 37 Dixie State College of Utah students that proves it’s not always a “goodbye and hello” when it comes to the popularity of smartphones. All 37 survey participants have a cellphone. 28 of the participants have some kind of smartphone, whereas only nine of them just have regular cellphones.

One could easily argue that everybody has a personal computer nowadays. But how did we all end up with little flat screens that we hold in front of our faces while we’re lying in bed or while trying to avoid awkward eye contact with others on the bus? It began with the desire to be more mobile. “Goodbye desktops, hello laptops.” “Goodbye laptops, hello tablets.” But it’s not necessarily a “goodbye” to most desktops and laptops.

“There are some things tablets can’t do and some things laptops can’t do,” Jacob Harris from LifeGuard Computers said, “it depends on how powerful of a machine you need and what you’re going to be doing.”

Greg Whitehead from the Geek Squad, a computer and technology help service provided through Best Buy, said he believes that laptops and tablets don’t exactly replace each other – they more like complement each other.

“What is a smart watch?” nearly every participant asked during the survey process after being asked the question: “Would you wear a smart watch?” A smart watch, more specifically the I’m Watch, is a wristwatch with apps and nearly the same technology found in smartphones and computers. Most of the students surveyed said they don’t normally wear watches and don’t have the personal interest in owning a smart watch. 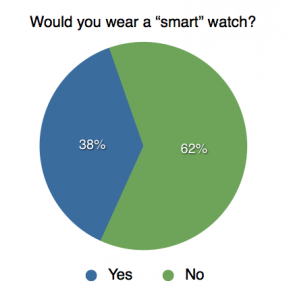 The general manager of Best Buy said that the advancement in technology will be judged on how much it will cost and if it will out-perform previously developed technology. But how can one properly judge and determine the success of a new product if it’s the only one of its kind?

Farhad Manjoo wrote an article for MIT Technology Review called You Will Want Google Goggles.  Manjoo wrote about the breakthrough of technology in a heads-up display on the glass of a pair of what seems to be an ordinary set of glasses until one takes a closer look. Maps, texts, pictures and more are projected onto the glass so that the user may view the world like that of a first-person video game.

One question that poses doubt in the future of technology is: Will computer scientists ever run out of ideas? “No, everybody’s got a different, creative mind,” Harris said. So we’ll just have to see what the future holds for us when we get there.

People want data privacy but don't always know what they're getting

Tech-assisted COVID-19 tracking is having some issues