ST. GEORGE – The St. George City Council unanimously passed a resolution Thursday recommending the name Dixie be left in the new name to be given Dixie State College.

“(The Dixie name) is a fundamental part of the community,” Councilwoman Gail Bunker said as she read the resolution.

The language of the resolution stresses the historical significance the name has to the community and that its history and heritage should be a factor in the institution’s new name.

“Dixie is the single most important term in the name of the college,” Bunker read.

Before the vote was cast, the mayor asked the council members if they wanted to speak to the significance of the name.

“I don’t know how you can take the name Dixie out of the college,” Jon Pike, also a member of the DSC board of trustees, said, ” … I support it.”

Pike also said he has witnessed great favor for the name, and cited a public survey conducted by The Spectrum in which there was “overwhelming support” for Dixie. 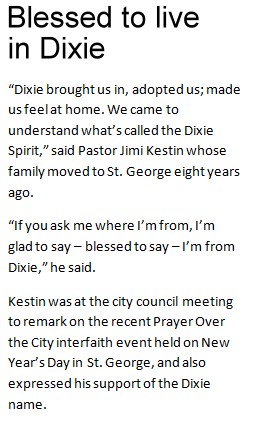 “Dixie has become such a part of me,” Bunker said, adding there was such a thing as the “Dixie Spirit” that is felt throughout the community. If the college drops the name when it becomes a university, she said, “it won’t belong to us as much as it did.”

“It’s a great a name,” Jimmie Hughes said. Though there is the actual South, he said Utah’s own “Dixie” is unique to this part of the country.

Gil Almquist said residents who may have moved into the area in recent years and found fault with Dixie haven’t taken the time to understand the history of their new home. “For somebody that first comes (here) – research it out.”

“I think it would be tragic to see the name of my alma mater ripped off,” Ben Nickle said.

McArthur said the name “runs deep” and anyone who has moved into the area and gained a special feeling about the place has experienced “the Dixie spirit.”

The mayor called for a vote on the resolution next which was unanimously passed. Once done, McArthur, the council members, and others gathered in the council chambers started singing “Are You From Dixie?”

Though a resolution has been passed, Pike said it is important to acknowledge dissenting opinions: “We have to acknowledge that words and names mean things,” he said. “We need to be sensitive and aware.”

“I’ve really tried to be open-minded,” he said, yet did not see the Dixie name changing soon.

He also said 70 percent of Dixie State’s student population is from Southern Utah and that most of them understand the significance surrounding the name.

Gil Almguist compared the name to a monument. “There are monuments all around the world that offend,” he said, yet that is not necessarily their intended purpose.

The purpose of a monument is to remind people of the past so they can learn from it, Almquist said. In the case of Southern Utah’s use of the term “Dixie,” it refers to the region’s unique heritage, and is not connected with the Old South or things like slavery or racial oppression.

Almquist mentioned various monuments in counties like Germany that reminded people of tragic events like the Holocaust. Though these monuments may be offensive to some, they stand as a testament to others.

Pike said he believes “Dixie” will be retained in the new name of the college. As for the city council’s resolution, he said, “this is a chance for elected officials to weigh in.”

The measure itself is rather symbolic, he said.

In the end however, even if Dixie is dropped from the name of the soon-to-be university, Pike said he would continue to support the school and hopes the community can rally around whatever name is chosen.

Sorenson Advertizing will publically announce its conclusions and recommendations regarding the new university name at the Avenna Center on July 9 at 7 p.m.  The school’s Board of Trustees will vote on the name change and university status on Jan. 25, followed by a vote by the Utah Legislature for final approval.