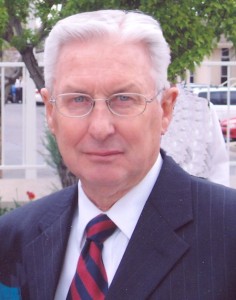 Washington, Utah – Vernon Thomas “Tom” Draper passed away Thursday, December 6, 2012 at age 80. He was born on January 10, 1932 in a small coal mining  community, Peerless, Utah, to Henry E. and Mae Draper. He married his eternal companion and sweetheart of 55 years, Rosalind Radley, on June 12, 1957 in the Idaho Falls LDS Temple.

Tom graduated from North Emery High School serving as student body president. At the age of nineteen, he joined the United States Air Force during the Korean War and served honorably as a military policeman for four years. After serving his country, he served faithfully as an LDS Missionary in the Central Atlantic States Mission. Upon his return, he enrolled at Brigham Young University, married Rosalind and later earned his Bachelor’s degree. He also earned a Masters of Business Administration degree from Utah State University.

He embarked on a very successful professional career holding various management positions, starting with Boeing Corporation as a Junior Industrial Engineer. Moving back to Utah from Seattle, WA, he was employed as a Senior Price Estimator for Thiokol Corporation. In 1968, he began a rewarding career with The Church of Jesus Christ of Latter-day Saints, traveling to all areas of the world for the Distribution and Translation Department. He then transitioned back into the corporate world taking a Senior Financial Analyst position for Eaton-Kenway. He completed his career by working for Hercules Aerospace as a Senior Contract Administrator. He was a Certified Administrative Manager (CAM).

Tom derived great satisfaction volunteering his time and working in the Boy Scouts of America program. He served many years as a scoutmaster, as a Wood Badge Trainer and as District Chairman over the Farmington Bay Council. His countless years of scouting service earned him the Silver Beaver award in 1985.

His unwavering faith and service in the LDS Church was a source of strength and satisfaction. He served in numerous leadership positions; as Elders Quorum President, as a counselor in four Bishoprics, as a Branch President, as a member of several High Councils. He and Rosalind served two missions together; one in the St. George Temple Visitors Center and the other in the Australia Perth Mission. Many precious friendships were cultivated from their missionary service together. He loved the truths found in scripture, and was steadfast in living the commandments.

As a youth, Tom developed a lifelong love of the outdoors. He loved to camp, hunt and fish all over the intermountain west, and later introduced his family to the sport of snowmobiling. Some of his fondest memories were of the 14 winter snowmobiling trips to Yellowstone National Park with family and close friends.

Most important to Tom was the pride and joy of his family. No father loved his family more. His priority was always to make everyone happy and feel appreciated. His unselfishness and kindness to others was his trademark.

Tom was blessed with an inherent desire to live with a purpose. Life was not just to be happy, but to also be useful, honorable, compassionate, to make a difference and always choosing to emulate his Savior.

Funeral services will be held Tuesday, December 11, 2012 at 11:00 a.m. at the Washington LDS 10th Branch (Sienna Hills) Chapel,  1500 Ridge View Drive, Washington, Utah. Visitations will be held Monday evening from 6:00 p.m. to 8:00 p.m. at Metcalf Mortuary, 288 West St. George Blvd. and on Tuesday, prior to services at 10:00 a.m. at the Chapel. Interment will follow at the Washington City Cemetery. Arrangements entrusted to the care of Metcalf Mortuary, (435) 673-4221. Please visit our website at www.metcalfmortuary.com for condolences, complete obituary and funeral listings.