MOVIE REVIEW – Many people become sensitive when it comes to adapting beloved novels into big-screen films.

When it is executed with grace, you come out with something like “Silence of the Lambs.” However, in many cases the longing for visuals and ignorance of story development give you films like “Dune.” Some books require a vast amount of story and character development, while others stem from books like “The Cat in the Hat” and call for nothing but Mike Myers jumping around for two hours in heavy makeup.

David Mitchell’s “Cloud Atlas” is particularly difficult because it is not a simple story. In fact, the novel contains six different stories. And rather than being an anthology of the six, all of these stories connect with one another, spanning a timeline from the 19th century all the way to the very distant future. That the novel was a hit with readers and critics alike only adds pressure.

Writers/producers/directors The Wachowskis and director Tom Tykwer split the duties on this massive scale story. The former are veterans when it comes to big stories, having directed “The Matrix” and written “V for Vendetta.” After seeing the movie, three directors felt completely appropriate to me for “Cloud Atlas.”

Because all six stories connect in one way or another, the filmmakers made the choice to use the same actors throughout each. This was a very effective strategy because it allowed people like myself who have not read the book to witness how these different characters connect. Though an effective tool, it did have a downside.

A lot of the actors seemed to portray their roles more eloquently than others. Hugo Weaving delivered many fantastic, consistent performances. Jim Sturgess also took me by surprise with his quality performances. Tom Hanks embodied some of his characters naturally, but came off as awkward with others.

The story itself is one that I feel will be a hard pill for the general audience to swallow. Watching “Cloud Atlas” is like running a mental marathon: Instead of telling each story by itself, it breaks apart all six stories and throws them together in what seems like a cinematic shuffle playlist. “Cloud Atlas” requires undivided attention, and as much as a bathroom break could jeopardize the entire movie experience. Is this an effective strategy? Most would say no, but it is important to remember that movies aren’t meant for viewers to walk out of. You wouldn’t skip pages in a book, would you?

It’s also important to remember that you aren’t watching your normal, cookie-cutter story. This movie breaks all the textbook procedures of storytelling. It is like slowly peeling back layers of gift wrap to unravel a massive portrait of life and human nature. Be warned though, the wrapping paper is very thick and takes a lot of time to peel; almost three hours.

One of the strong points of “Cloud Atlas” is that it blends a variety of genres together, creating a cinematic soup that will satisfy many. You’ll taste hints of romance, drama, crime and science fiction with notes of comedy throughout.  But like many complex foods, it may be an acquired taste.

Even though “Cloud Atlas”oozes with story substance, it’s very easy on the eyes. Actually, that’s an understatement; it is a visual marvel. I’ll go as far as to say that the use of special effects in “Cloud Atlas” rival those of “Avatar.” The directors have shown that CGI and  real cinematography can dance beautifully together when executed appropriately.

All in all, “Cloud Atlas” delivers a complex but riveting story that is told with beautiful visuals, but may require more than one viewing.

The De La Cruz designation: 4 pops out of 5 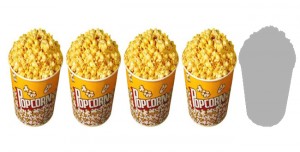 Letter to the Editor: Let's not ignore the good at Desert Hills High School

Letter to the Editor: Applause needed for cooperation on Utah Test and Training Range Land Exchange

'We need to be in charge of our own government again'; Sen. Mike Lee hosts town hall at SUU