MOVIE REVIEW – Among fan boys, nerds, movie buffs, sci-fi geeks and the general audience, 2012 was a year of much anticipation in the theaters. I mean, how could you not have been excited in 2011 knowing that 2012 would bring us “The Avengers,” “The Dark Knight Rises,” “The Amazing Spider-Man,” “Prometheus” and countless others?

Suffice it to say that not every movie I anticipated this year has lived up to my expectations. I won’t throw any stones, but I will say that these movies have taken a lot of attention from ones that have turned out a lot better – which happens sometimes. Today, I come to you with a film that has remained slightly under the radar of the general audience: “Looper.”

If you aren’t familiar with the story, “Looper” is about an assassin named Joe (Joseph Gordon-Levitt) who specializes in assassinating people from the future. These people are sent to him in present time, where he takes care of them. Things get a little complicated after the future version of himself (Bruce Willis) is sent back to “present Joe” to be killed.

The movie explains it a lot better then I can, and you should not be intimidated. The plot plays out smoothly and answers your questions almost as quickly as it inspires your curiosity. You are immersed into a futuristic world that has an uncomfortable truth to it, a world that doesn’t seem so far away. In this postmodern metropolis, you are sucked into a narrative reminiscent of the writings of Anthony Burgess and Phillip K. Dick.

The story satisfies the palette with tones of many genres including crime, sci-fi, drama, noir and action. Together they create a dark narrative that hooks you until its satisfying ending. That’s not to say that this movie doesn’t require patience, however. There are a few slower parts, but slow and clear explanation is a lot better than plot holes.

The cast delivers each character with a blend of gripping intensity and tender sentiment. Joseph Gordon-Levitt drives the film with his most evolved and encompassing role to date, while Bruce Willis proves that you don’t need to be young to keep your reputation as an action star. After all these years, his performance remains at the top of its game. “Looper” is also laden with gems like Paul Dano, Jeff Daniels and the always lovely Emily Blunt.

Director and writer Rian Johnson gift-wraps a genre flick that oozes with originality, like a breath of fresh air in the lungs of every movie buff. This movie shows us that remakes and sequels aren’t the only things left in film, and that you don’t need 3D or gimmicks to deliver a smash hit. “Looper” follows the formula for a great film: Style, substance, a great cast and great writing. Each of those ingredients creates movies that represent their genre and will be remembered for years to come, and that is what “Looper” is. A great movie.

The De La Cruz designation: 5 pops out of 5 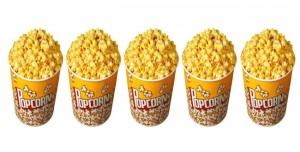