Image courtesy of Flood the Love

ST. GEORGE – Following a disastrous flood of water in Santa Clara, Southern Utahns are flooding the victims with love.

In the wake of the Santa Clara flood, affected homeowners are left with the daunting task of repairing what has been damaged and replacing what has been lost. Sadly, the majority of the flood victims lacked flood insurance and may not qualify for federal disaster relief, either.

Though help may not come through insurance agencies or the federal government, the community itself has come to the aid of those affected. Thousands of volunteers converged on Santa Clara following the flood that resulted from the failure of a nearly 100-year-old dike on Sept. 11. An estimated 61 homes and 13 to 16 businesses were damaged.

Even though the mud may have been cleared from the streets and large amounts of debris hauled away by this point, aid can still be rendered to the flood victims in the form of financial and material donations.

A flood relief fund has been set up at State Bank of Southern Utah, and fundraisers are being organized. One such fundraising effort will be the “Flood the Love” event on Sept. 29 in St. George. 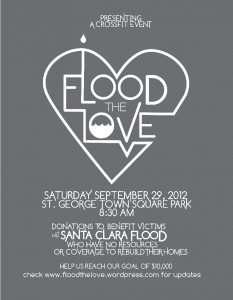 People who enjoy crossfit workouts are invited to the St. George Town Square near the splash pad at 8:30 a.m., Saturday, Sept. 29, for their WOD, or “workout of the day.” The workout is free and donations will be accepted during the event.

For people who don’t like to exercise, Brock Rasmussen, the organizer of the event, said they are still welcome to attend and donate money, as well as make arrangements to donate material goods, such as clothing, appliances, and so forth.

T-shirts with the “Flood the Love” logo will be available for purchase at the fundraiser as well. Donations can also be accepted through the Flood for Love website.

Rasmussen said he and his wife were helping clean out flooded homes when they began to wonder how the victims would get by without extra aid from FEMA or insurance. They also wondered what they would do if caught in the same situation.

“How would I ever be able replace all of this stuff?” Rasmussen said, mentioning items destroyed by the flood. “You feel so overwhelmed and helpless.”

“Our hope in starting the ‘Flood the Love’ event is to help start the rebuilding,” Rasmussen wrote on the event’s website. “Every dollar raised will go toward benefiting the families and homes affected.”

It is the goal of the Flood the Love organizers to raise $10,000 by the end of Saturday.

Black Friday: A boon for box stores during pandemic, but what does it mean for local businesses?

Letter to the Editor: Giving thanks for my rescue at Snow Canyon State Park