COMMENTARY — BYU is officially off to a solid start this year. The Cougars are now 2-0 and ranked in the Top 25 in the AP poll. That feels good, like things are back to normal.

Last Saturday, Weber State gave BYU a good opportunity to work in several back-ups at many positions in the 45-13 blowout. It was also a good opportunity to cut down on any potential injuries and rest the starters for the long season ahead. BYU scored six touchdowns and this all came from 3 different QB’s. Riley Nelson had an excellent first half and then was pulled out of the game. BYU’s offense had 532 yards of total offense with 307 in the air and 225 on the ground attack. The defense kept Weber State to 254 total yards. Preston Hadley had nine tackles and Spencer Hadley harassed the QB with his two sacks. The Cougars defense tallied six sacks and nine tackles for loss. It was the eighth straight game where BYU has held its opponents to under 300 yards.

To me, this says it all about coach Bronco Mendenhall’s defense and where it is headed. When I had the opportunity to play at the Y, Coach Mendenhall was the Defensive Coordinator and let me tell you, he demands 100 percent effort out of his players. There was no other coach I’ve ever seen work their players that hard and they respected and loved him for it.

Now, this is a special week for the state of Utah and its football fans. I am not going to sit hear and bash on the University of Utah and its program. For the most part, they look solid this year. It’s unfortunate Utah will be without its starting QB for this weekend and the rest of the season. Jordan Wynn has struggled through four different shoulder injuries and called it quits to his playing career on this final injury. What an agonizing decision it is for a young man tomove from the sport he loves and has played his whole life.

With the loss of Wynn and last week’s loss to Utah State, the Utes are actually at a real crossroads right now. I don’t think it’s the end of their season, but that loss didn’t help them out with their tough schedule moving forward. I would have really liked to watch a rematch from last years bashing of BYU by Utah. I know either way, Utah is running into a much more experienced and fine-tuned team than they faced last year. Last year’s nightmare, a 54-10 thrashing by the Utes, is one of those things that BYU fans are hoping to atone for this weekend.

I am sure that BYU’s defense will have no problem with Utah’s offense this year. It’s all about how the Cougars will play on the other side of the ball. If they can control the clock with the run game, it should definitely go in BYU’s favor. 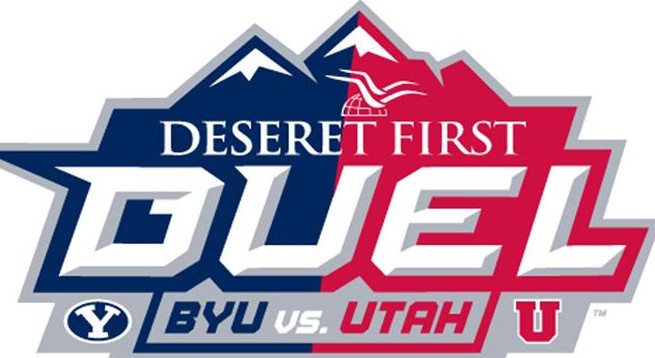 One thing is for sure: This will be a dogfight, especially on the inside. Coach Mendenhall said he expects the trenches to be more physical on both sides of the ball. Since I am a former O-lineman as well as D-lineman, I can honestly say this is where any game is won or lost. Utah State had no problem getting to Utah’s QB last week and I see a more talented D-line at BYU with Romney Fuga in the middle and linebacker Kyle Van Noy disrupting things on the blitz.

BYU is a 3 ½-point favorite for this game up at Rice-Eccles Stadium. I see it being another knock-down, drag-out war between two old rivals and OLD RIVALS are the key words there. Since they are not on each other’s schedule for any upcoming years, the winner of this game will have bragging rights until they meet again sometime down the road.

I do not want to go off on some long tangent about the University of Utah’s decision to join the Pac-12. That’s water under the bridge. But what really gets me fired up is that the administration at Utah has taken away something bigger than themselves by dropping the BYU- Utah rivalry game. The state of Utah and fans from both sides are hurt by this decision. It’s the one time of the year when even your novice football fan gets excited about razzing their friends before and after the game.

The way I see it, the Utes have decided that BYU is too good of an opponent to play in the preseason. Or maybe Utah feels like it has progressed beyond BYU’s level. Either way, it’s chicken. That’s right, chicken, just like Biff told Marty McFly in the movie Back to the Future. I don’t know who Biff is and I don’t know who Marty McFly is in this situation, but my guess is that Utah is Biff and is going to get knocked out his week by Marty McFly (BYU).

But the decision has been made. Whether temporary or permanent, the Utes and Cougars will not play each other after Saturday’s game in Salt Lake City. It’s time to move on.

That’s why I’m super excited about BYU’s new rival, Boise State. The original BCS-busting Broncos are not afraid of a little competition in the preseason. Here’s a fact: Boise State has scheduled the Cougars all the way through the year 2023.

This could be the beginning of a beautiful thing.