COMMENTARY – After watching BYU’s first game, I am extremely confident that this year will be one of those years to remember.

This team has a ton of upside, depth all over, a lot veterans and some great up and coming young players as well.

Thursday’s game showcased some of the Cougars strengths this year. With a dominant BYU defense holding Washington State to 224 total yards and six total points, the Washington State Cougars just couldn’t match up. Kyle Van Noy had two sacks and looked as good as he ever has with some fresh legs. Brandon Ogletree had eight tackles and was all over the field causing havoc. Good defensive line pressure and secondary coverage shut Mike Leach’s offense down before it ever really got started. The defense, as a whole, looked better than it has in as many years as I can recall.

On the other side of the ball, Riley Nelson was very precise and looked a lot more patient and comfortable in the pocket. I think he is much improved over last year and his sometimes erratic play. He still had a couple balls get away from him, so he needs to learn to not force it. There’s nothing wrong with throwing the ball to the sidelines and out of bounds sometimes. This could be something that could potentially hurt BYU down the road while playing some of the tougher defenses on the schedule.

A couple of surprises came out of the woodworks and tight end Kaneakua Friel was at the top of that list. He had six catches for over 100 yards and two touchdowns. He bears a slight resemblance to Dennis Pitta with his great hands, good size and ability to run after the catch. He will make it hard for teams to match-up with him throughout this season. Skyler Ridley also came out of nowhere to make a lot of plays, including a great lunging touchdown catch in the back of the end zone.

All in all, it was a good performance by BYU. I would like to see a better finish when the opportunity presents itself. BYU could have driven the score up a little more in the second half with better execution in the red zone. Realistically, the Cougars will need to play four full quarters to beat some of the high-powered offenses they play later this year.

When the new season starts, optimism runs high until someone knocks you off. With this year’s team, I see a whole new caliber of offense, as well as defense. There are back ups that are as good as the starters. A case in point is Taysom Hill, the freshman QB from Boise. He came into the game in a few red zone situations and threw an 18-yard touchdown pass on a fourth down. He is going to be something great, folks. His time will come, but hopefully not until he has some more experience under his belt. I like that he is already getting reps with how young he is.

I see depth all across the board, something that has, for the most part, been lacking in years past. Coach Bronco Mendehall has definitely done an amazing job with re-establishing BYU as a great football program. This is now showing with the talent coming in the back door of this program. 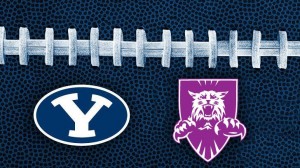 As for this Saturday, Weber State makes a visit to Lavell Edwards Stadium (1 p.m.). It’s been 33 years since the Wildcats played BYU and this one may get messy. Weber State lost its first game to Fresno State 37-10. After last week’s start with BYU dismantling Washington State, Cougar fans ‘expectations will be sky high. In fact, I wouldn’t be surprised if BYU plays this week as a prep week for upcoming opponents.

I don’t want to discredit any team, let alone a team from Utah. But let’s be real, this week is a preparation week for our rival game with Boise State. Yeah, that’s right. I said it. Our NEW rival, Boise State. What about Utah? Get outta here. With Utah’s administration choosing not to play the Cougars after this season, I suppose it means the Utes are either far too good for BYU or they’re not willing to get beat up every year by BYU in a non-conference meeting. Either way, I believe that it has ruined what once was a really fun rivalry to watch. That’s all going to be covered in detail next week, but for now let’s keep our focus on Weber State and Boise State – two teams who are not afraid of some competition.

It does look like BYU and Boise State have agreed to play each other for years and years to come. This is really exciting for BYU as Boise State has become a high-profile program with its success over the last few years. The Broncos are the true BCS busters and BYU fans will all be excited to watch these games over the next few years. Boise State lost a close game to #13 Michigan State last week,  still looks very solid this year once again.

I look for similar results this week with Weber State as we saw in last week’s win vs. Washington State. We should see a lot more players thrown into the game to see who else is going to step up this year. BYU’s coaching staff will also likely look at different situational plays and strategies. Don’t expect a David and Goliath story this week, although it would be fun to see some good competition from Weber.

Scott Young is a sports commentator and the views expressed here are not necessarily those of St. George News.