ST. GEORGE – In a one-night special event hosted by Because Animals Matter, nationally renowned animal welfare advocate Mike Arms will speak this coming Friday in St. George on the future of the cause.

On August 24 at the Hilton Garden Inn in St. George, Arms will make his first Southern Utah appearance to share his passion and goals for the future with the people of Dixie. The event begins at 7 p.m; Arms’ speech is expected to last an hour and a half and be followed by a question-and-answer session with the audience. Tickets cost $10, with all proceeds being donated to BAM.

According to his organization’s website, Arms’ passion for animal welfare began in the 1960‘s, when he journeyed to New York as a recent college graduate with an accounting degree. He took a job with the American Society for the Prevention of Cruelty to Animals, but day after day of seeing pets suffering unspeakable brutality took its toll and he resigned just seven months later. On one of his last days with the ASPCA, the office received a report that a dog had been hit by a car in the Bronx. No other welfare workers were available, forcing Arms to take on the task himself.

He arrived to find a badly injured young terrier mix lying in the middle of the street. As he prepared to lift it into his rescue vehicle, three men emerged from a nearby building and confronted him; according to Arms, they said they did not want him to take the dog because they had made bets on how quickly it would die. Determined to save it, Arms ignored them. The moment his back was turned, the men jumped and assaulted him. He was stabbed twice, struck with a baseball bat and finally knocked unconscious by a glass bottle.

Arms awoke to the seemingly impossible sight of the dying puppy licking his face, in what he believed to be a reciprocation of his earlier efforts. Amazed and moved by its compassion, he vowed that if he survived his own wounds, he would devote the rest of his life to the care and protection of animals. The dog, however, died mere minutes later.

For the past four decades, Arms has kept his word and emerged as a leading animal welfare advocate. He became president of the California-based Helen Woodward Animal Center in 1999 and has since transformed a small shelter into an organization with influence reaching not only across the nation but to some other parts of the globe. Animal Center Education Services, an educational program founded by Arms, will be hosting its first international conference in San Diego this September and features representatives from animal welfare groups in 22 U.S. states and 4 countries. 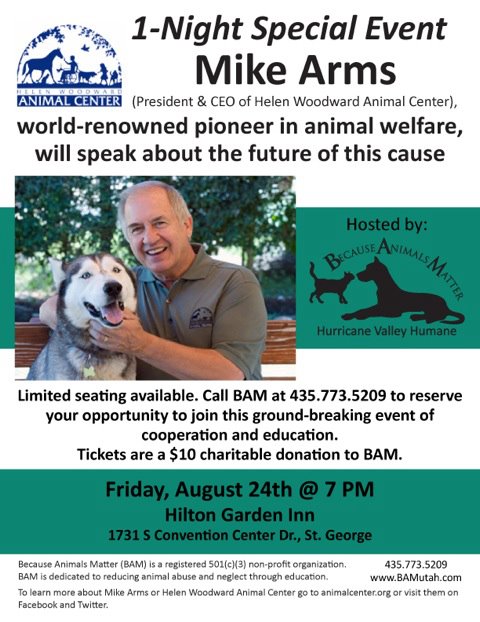 In addition to his work at the Center, Arms also travels the country to speak at numerous animal welfare functions. And this Friday’s event hosted by BAM is one of those fortunate enough to engage him.

A unique and instrumental animal welfare organization in Southern Utah, BAM is dedicated to improving the lives of animals through education and communication. The group works to find both foster and permanent homes for strays and has relocated many from shelters where they would eventually have been euthanized. In addition to hosting spay and neuter programs, they sponsor Kibbles on Wheels, which assists elderly, ill and home-bound individuals in feeding their pets.

Many of BAM’s programs are modeled after those that Arms created. They have sent representatives to the Helen Woodward Animal Center for training and have long anticipated the arrival of Arms himself as a guest speaker.

“This opportunity is rare for (us) and our region as a whole,” BAM’s president, September Smith, said. “It is our hope that by introducing local animal advocates to (such a) leader, we can all be more successful on behalf of animals in need and the people who care for them.”

The event is not only for representatives of animal welfare groups, but for anyone who genuinely cares about animals. Smith said that she hopes Arms’ speech will offer encouragement to those who have long been fighting to advance the cause, as well as motivating others to get involved for the first time.

“People with an interest in animal welfare, particularly those considering volunteering with an organization are recommended to attend,” she said. “This could be a turning point (in) how we all work with and for animals.”