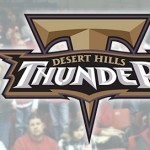 SYRACUSE – Brock Anderson and the Syracuse Titans made it to the 5A semifinals last year. For Syracuse, that’s not enough.

Anderson scored early and often as the Titans built a 31-6 halftime lead and coasted the rest of the way, winning 38-13.

Even so, Carl Franke, who made his debut as Desert Hills head coach, felt only a jolt of excitement once the game ended.

“It was all positives tonight,” he said. “We played against a really good Syracuse team that has a lot of talent. We’re a very young team that has a long way to go, but the kids never quit tonight. They listened to their coaches and never, ever gave up.”

Syracuse kicked the game off with a 43-yard touchdown run by Anderson, the Titans much-touted star. The athletic QB followed that play up with a 38-yard field goal and then made three consecutive touchdown passes to receivers Kavika Fonua, Diante Mitchell and Mason Woodward that blew the game wide open.

Desert Hills finally got on the board in the second period when quarterback Ty Rutledge connected with Josh Anderson who skirted by defenders and ran the ball into the end zone.

“We preach mental toughness,” Franke said. “We talk about family and sticking together. We’re always going to look out for one another, no matter the circumstances. Tonight, I thought the boys really played strong. They never gave up on a play. And that’s really exciting to see as a coach.”