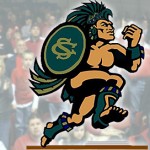 Meyer had a pair of scores and Christensen also hit Bobby Bowring for a score as the Broncos held off a Snow Canyon rally.

Taylor Johanson’s second-half score put the Warriors in a terrific position to force a possible comeback, but a fumble near the end zone with five minutes left in the game proved too costly a mistake for Snow Canyon to overcome.

“They were tired,” SC offensive coordinator James Brown said. “I thought they battled really well and had opportunities to take over the game. But turnovers hurt us.”

San Juan made the first strike when Bobby Bowring ran in a 15-yard pass from Christensen early in the first.

The Warriors struck back with a 33-yard Brandon Stafford field goal, but couldn’t keep pace in the second quarter when San Juan outscored them 12-0.

Taylor Johanson’s third period leap into the end zone kept the Warriors hopes alive, but the earlier mistakes came back to haunt them.

“This was a good gauge for us,” Brown said. “Our running backs – (Brandon) McFarland and Johanson – ran the ball really well for us. And our offense did a good job. Mason (Smith) threw the ball well and did a good job moving his feet.

“Overall it was a good opener for us. Now we’ve got to buckle down and go to work.”

The Warriors next face the Shadow Ridge Mustangs from Nevada.