Here’s an update from Craig Shanklin:

As Di and I were pedaling along in the beautiful crisp early New Mexico morning, she rode up beside me and said, “You won’t believe what is playing on my iPod, Jackson Browne’s ‘Running on Empty’ … and that how I’m feeling today.”

Those are the highs and lows of long-distance cycling. Beauty and adventure offset by tired, sore muscles and the boredom brought on by endless hours of pedaling. We have now been riding for the last 8 days, covering over 400 miles on our mountain bikes, and it is still 3 or 4 days before we have a planned rest day.

Since we began our 2,500 mile journey eight days ago from the U.S. border station in Antelope Wells, N.M. we have covered a lot of ground, met some very interesting people and have a growing list of travel stories. After leaving the Mexico border and the grumpy and bored U.S. border agents, we rode north along the “Lonely Highway” in intense heat … seeing a constant stream of border patrol agents, all curious about us, and virtually no private vehicles. After passing several deserted New Mexico towns along this road we finally began our off-road riding in Separ, heading north to Silver City along a rutted, sandy trail, crossing the Continental Divide several times. 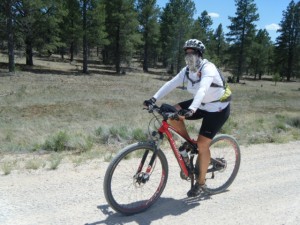 The huge Whitewater-Baldy fire, still largely uncontained, had closed much of the Gila Wilderness Area and our planned trails. Therefore, after Silver City we were rerouted for two days along the western edge of the fire, assuring us clear air.

Because accommodations are infrequent in this part of the state, we stayed one night on a 100-year-old homestead, now run by the original owner’s granddaughter. Riding through the rolling hills we saw two huge fire camps with a city of tents and large numbers of trucks and helicopters. While the effectiveness or the appropriateness of these firefighting efforts can be debated, the amount of money spent and the manpower deployed is impressive.

A few days later at a remote cafe in Quemado, N.M. we got to talking with a highway worker at the next table who told us he had just graded the road we would be riding later that day. He said the good news was that he had smoothed out the corduroy (washboard) but that the road was now very soft and loose with sections of deep sand. He offered some tips, like riding on the slightly firmer left side of the road, but said that we would just have to do our best.

It turns out he was right … it a very difficult day of pedaling through deep sand, often forcing us to walk … or hike-a-bike, as we call it.

The next day was something to celebrate. We are riding with one other couple, Dave and Denise, and it was Dave’s 60th birthday. It was perfect, as that day had us riding through Pie Town, a wide spot in the road made famous by the two pie shop cafes. We stopped in at The Good Pie Cafe (the other is the Pie-O-Neer Cafe) for a celebratory midmorning slice of pie to celebrate Dave’s birthday. The key lime was terrific and the chimayo cherry spicy, but the best liked was the New Mexico-style apple pie with green chiles and pine nuts … very good and highly recommended. 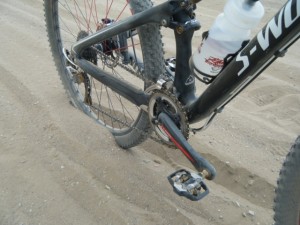 “We have had several days of riding with long sections of deep sand,” Craig Shanklin wrote. “These require good balance and strong legs … and if all else fails, we push the bikes.” Photo taken in New Mexico, approx. June 18, 2012. | Photo courtesy of Craig and Diane Shanklin

While staying in Quemado, we met three gentlemen who were riding their off-road motorcycles on the Continental Divide route. They called themselves the “three amigos” and had stickers with their logo on each motorcycle. We were admiring the stickers, so they gave us one. It is now one of many we have collected now decorating our support van (driven by Craig’s parents, Kay and Ray). Di was trying to swap her bicycle for a motorcycle…but they weren’t falling for that!

We have seen some great wildlife along the way. Though not “wildlife,” the numerous herds of cattle (we are riding through open range and through large herds) keep us entertained as it is baby season and the calves are adorable and very curious. We have seen several hawks, squirrels and small critters, but our most exciting sighting so far was a cow elk just a few yards up the road from us. She was big and beautiful and not all that disturbed by us … she just slowly walked into the pine trees.

Yesterday we also saw our first poster warning us of bears in the back country. I guess we’ll start wearing our noise-making bear bells and carrying our protective bear spray in the next few days.

In spite of the difficult trails our bicycles are holding up very well, though our electronics have not faired as well. Two GPS units and a video camera have already stopped working. More importantly our bodies working well but complaining. Sore butts and knees ate the most common ailment so far.

Next we ride towards Cuba, N.M. and then along the most difficult section of trail on our entire 2,500 route. We’ll report back in a few days with more news from the journey.

Craig Shanklin, 56, and Diane Shanklin, 49, left St. George on June 10 for the U.S.-Mexico border in Antelope Wells, N.M., where their pedaling will begin. They should reach the U.S.-Canadian border at Roosville, Montana after about 60 days. They will ride through New Mexico, Colorado, Wyoming, Idaho and Montana.

The Great Divide Mountain Bike Trail, developed by the Adventure Cycling Association, is the longest off-pavement bike route in the world. The trail follows the Continental Divide as closely as possible and crosses the Divide 29 times.