ST. GEORGE – The fourth annual Lake to Lake Relay has more teams entered than years past. Today, Feb. 29, is the last day to register.

The relay race begins 8 a.m. this Saturday, March 3, at Gunlock Reservoir and ends a full 150 miles away at Sand Hollow State Park.

Race officials have confirmed at least 111 teams have entered to compete. A team can be made up of only men, only women or co-ed. The team can also range from 1-5 members.

“Last year we had 98 teams,” Assistant Coordinator Michelle Graves said. “It’s getting more popular and people are starting to know about [the race]. It is well run and scenic so it is growing in popularity.”

Teams can enter in the relay portion of the race with 2-5 members on the team or in the ultra portion, which is a one-person “team” who will be required to run the full course of the race.

“This year we have a couple of ultra teams signed up,” Graves said. “The feat is pretty amazing.”

There is no time limit on the race; therefore, the majority of the teams finish. Last year only two teams did not finish, Graves said.

The race doesn’t have aid stations along the route so the support of the racers comes from the other members of his or her team.

“It’s really fun if people don’t know much about relays,” Graves said. “They have their van, a team leader and it’s a really fun way to spend time with your teams. Many will dress-up and decorate their vans.”

The event will take place throughout the day. Besides completing the race, the prize at the end of the race is an awards banquet held at the Dixie Convention Center, 1835 S. Convention Center Drive, for all members who competed in the race.

The awards given are for those who won and some not-so-serious awards: to the competitor that wore the best costume, for example.

There will be no road closures, but the public is asked to exercise caution on the course route on the day of the event. 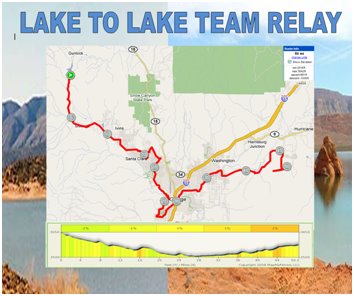 Visit the St. George City recreation website for more information on the Lake to Lake Relay or call 435-627-4560.

Dayna Lundin graduated from Dixie State College with a BS in Mass Communication in May 2011. Besides being a mommy of two precious little boys she thoroughly enjoys her job as an Assistant Traffic Director at Canyon Media and spending time with her family outdoors. Dayna has written and taken photos for Today in Dixie and the DSC newspaper Dixie Sun.