A protester argues his right to carry a sign into the St. George City Council meeting. | Photos by Mori Kessler, St. George News 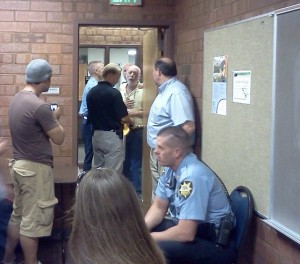 ST. GEORGE – When it was announced that Occupy Saint George members would sit in on a St. George City Council meeting, members of the Washington County Tea Party Coalition vowed to meet them at the city offices.

With the exception of one Occupy Saint George protestor escorted out of the city office building by police, interaction and dialogue between the Occupiers and Tea Partiers remained largely civil and free of contentious argument. In some cases, preconceived notions were even torn down and replaced by mutual understanding. 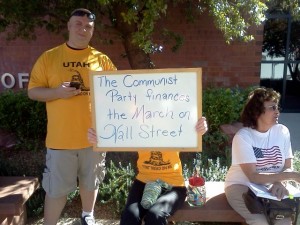 With the city council meeting slated to begin at 4 p.m., Tea Partiers began to arrive at the city offices at 3:30 p.m. At the same time, Occupy Saint George began to assemble in the park in the Town Square.

Larry Meyers, a member of the leadership committee for the Washington County Tea Party Coalition, said that the purpose of the Tea Party’s presence was not to protest the protesters, but rather to show them that there was already a local organization in place that stood against big government and fiscal irresponsibility – namely the Tea Party.

Meyers was present at the Oct. 10 meeting Occupy Saint George held in Vernon Worthen Park. He related his impressions to a fellow Tea Party member and said he was not overly impressed. However, he said he appreciated some of the group’s grievances.

“We’re sympathetic to the fact we need better government,” he said.

As Tea Partiers gathered, a lone Occupy Saint George member, Gary Engleman, appeared carrying a sign that read “Too big to fail” on one side and “Put the crooks in jail” on the other. The “crooks” in question were the big bankers and others involved in the financial crisis that caused the recession.

“A lot of people should be put in jail for fraud,” Engleman said.

Soon some Tea Partiers would have their own sign up that read “The Communist Party finances the march on Wall Street.”

Tea Partier Roland Hunter did not have a favorable view of the Occupy Saint George group.

He threw Occupy Saint George in with the Occupy Wall Street crowd in New York City. He sees the movement as little more than a group of people who did not want to have to work hard for their livelihood and wanted to take money from the so-called wealthiest one percent.

“They have no solutions,” Hunter said.

As the time to begin the council meeting drew near, between 17 and 20 Tea Partiers had gathered to greet Occupy Saint George. 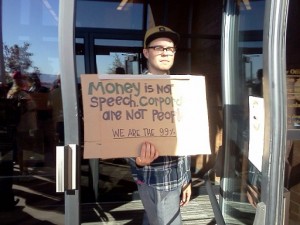 Occupiers Arrive and an Occupier Removed

Shortly after 4 p.m., between 10 and 13 Occupy Saint George members, signs in hand, arrived. As the Occupiers marched up the steps to the front doors of the city offices, the Tea Partiers began singing “God Bless America.”

Once inside, police officers asked the Occupiers to leave their signs and masks in the hallway. The City Council was willing to let them into the meeting, but had ruled that signs were not allowed due to their distractive nature. The Occupiers agreed and the signs were left outside the council chamber. Even an iconic Guy Fawkes mask – something that is fast becoming a highly recognized symbol of the Occupy movement – was willingly left behind.

The Occupiers took their seats, as did the Tea Partiers. There was no disruption made by either side until Engleman tried to enter the room with his sign, despite being asked repeatedly to leave it behind. Engleman asked what city ordinance he was breaking by having the sign, and appealed to his Constitutional right of free speech. He proceeded to raise his voice and yell for help as two police officers escorted him outside.

“They’re afraid to hear the truth,” Engleman protested as he was taken outside.

Once outside, the police told Engleman he was not allowed back into the building. If he broke his newfound banishment, he would be arrested for trespassing.

In a way, Engleman’s expulsion from the city offices acted as a catalyst between the Occupiers and Tea Partiers. As both parties poured outside in order to quell any potential problems, both sides began to actually talk to each other, rather than simply point figures and throw around generalizing labels.

“We’re here to listen, not cause a problem,” Ryan Fisher of Occupy Saint George said. 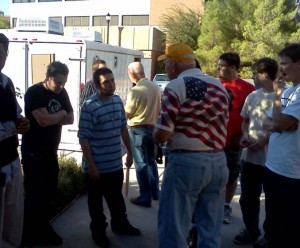 “We came with preconceived notions [about the Tea Party],” said Martin Shabazz, one of the leaders of Occupy Saint George.

“It’s easy to throw out labels,” he said, and added that he had a better opinion of local Tea Party members after talking to them.

“You can’t be hard-headed,” Jeremy Sorensen, an Occupy supporter said. “Be open to other possibilities.”

As the crowd thinned, members of both parties were shaking hands and in some cases smiling as they departed.

“We brought people out that didn’t support us,” Fisher said.

Shabazz said “the fact we were able to engage in dialogue” was a success in-and-of-itself. Both sides were educated on what the other believed and represented.

After the council meeting, members of Occupy Saint George went to the corner of St. George Blvd and River Road where they waved their signs to a reception of jeers and cheers and supportive car horns.

As for what lies in store for Occupy Saint George Shabazz said that the meetings in Vernon Worthen Park would continue each Tuesday from 7 p.m. to 10 p.m. Weekly protests would also continue on Saturdays at major intersections in the area from 10 a.m.

Shabazz added that people can continue to learn about the Occupy Saint George movement through its Facebook page, as well as a new Wiki site the group has created.

“We want to get our message out there,” he said.

While that message holds government-bailed out corporations and allegedly corporate-bought politicians accountable to the people, Shabazz admitted that there was no central philosophy to the movement. It draws from a plethora of related causes and crusades, and not one simple point of focus.

It is questions like that Shabazz wants answered by the politicians, and like so many others, he believes that the Occupy Wall Street movement is the engine that will help get the answers.

Right On: Party time in Congress

Lee: Join me in the cause for a good government; town hall Dixie