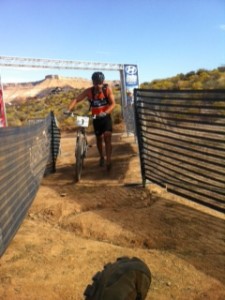 VIRGIN – Frog Hollow Mountain Bike race, which is a single-track trail race one mile south of Virgin, is a grueling race that started at 9 a.m. today and concludes at 3 p.m. Riders compete with the clock to see how many laps they can complete on Frog Hollow’s single track loop in six hours.

The goal of all these mountain bike races is to complete as many laps as possible within a given time frame.

Today’s Frog Hollow race is a 6-hour hybrid of its sister race of 25-hours consecutively to be held at Frog Hollow in November.

Today’s race, though one quarter the time involved for its November sister race, is grueling.

It is reported to be 80 degrees out at the time this story is published and the race is only part done. Racers are completing their second laps and are two hours into their race.

The Frog Hollow race is sponsored by Gro-Promotions, which also sponsors the True Grit Race annually in March, a 150-mile options point-to-point.

UPDATE with winner of today’s Frog Hollow race will follow from St. George News as results are in.

Dallas Hyland is a freelance writer, award-winning photographer, and documentary filmmaker with three films currently under his belt including "The Approach," featured in the 2012 DOCUTAH International Film Festival, and the 2014 Raven Award-winning film "Still Going Strong." Hyland is currently working on more films as well as commercial branding projects. He is a sponsored photographer and product tester for companies such as Clik Elite and its adventure photography line of camera bags. A founding writer at St. George News and the opinion editor at The Southern Utah Independent, Hyland's investigative journalism and opinion columns have ranged in topics from local political and environmental to the international front covering issues such as human trafficking in Colombia. At once action-oriented and of deep philosophical inclinations, Hyland's work drives at reporting in a manner that incites a dialogue aimed at getting to the truth. Based in Southern Utah, Hyland works from his studio in Kayenta’s Art Village, as well as from wherever his work takes him. On his rare off-days he can be found with his family and friends exploring the pristine outdoors. Hyland cherishes what he calls “the modest life, lived well.” Follow his work at about.me/dallashyland and www.dallashyland.com. Listen to him live as a regular guest co-host on the Perspectives talk show on Fox News 1450 AM 93.1 FM in Southern Utah.